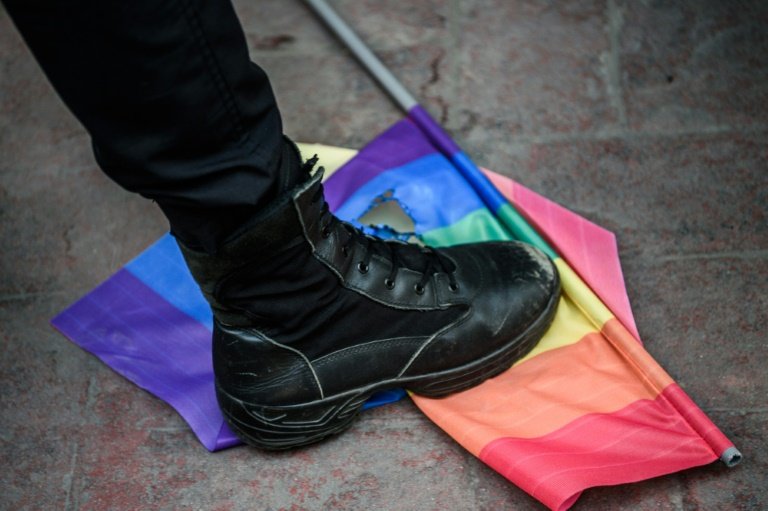 A police officer steps a rainbow flag during a 2016 LGBT protest in Turkey, where there has been a recent clampdown on pro-gay rights events / © AFP/File

Authorities in Istanbul have banned the "Queer Olympix", organisers said Saturday, becoming the latest pro-LGBT event to be cancelled in Turkey.

Some 130 participants were to compete in the third annual Queer Olympix this weekend in sports including football, beach volleyball and long jump, volunteer organiser Elif Kaya said.

However when they went to start setting up the event in the Kadikoy district on the Asian side of Istanbul on Saturday, "we saw police and two water cannons", Kaya said.

"We were told that we did not have permission to hold our event," she told AFP.

It is the first time the event, which began in 2017, has been cancelled by authorities.

The organisers said in a statement on Instagram that the event was banned by "the Kadikoy district governorate as a precaution against the provocations that may occur due to social sensitivities".

"The reason given is to prevent possible crimes; to protect public health, public order, and public morality."

Kaya said that the authorities "waited until the minute to tell us about the ban to avoid us appealing".

While Turkey is seen as one of the countries more tolerant to LGBT rights in the Islamic world, critics have decried a creeping conservatism under President Recep Tayyip Erdogan.

Numerous LGBT events have been banned in recent years, including the gay pride march in Istanbul, which had been running smoothly since 2003 and attracting tens of thousands of people until it was indefinitely cancelled in 2014.