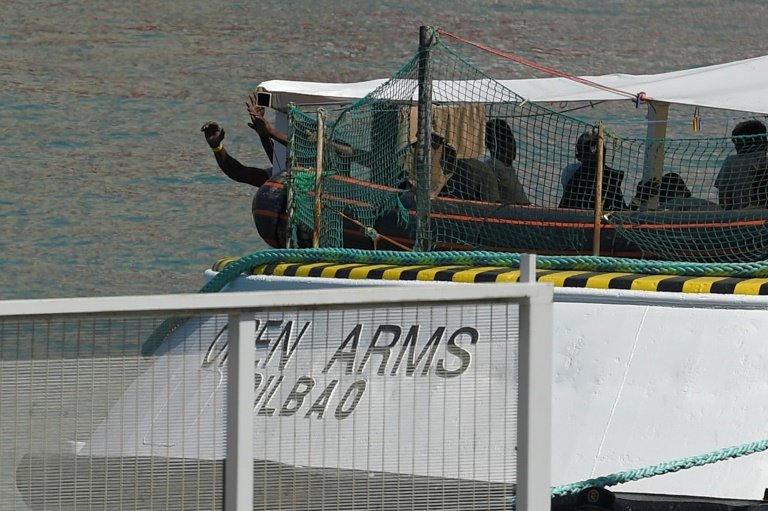 Spain on Monday stepped up criticism of Italian Interior Minister Matteo Salvini's refusal to allow 107 migrants on board a charity vessel to disembark at an Italian port, calling it "a disgrace to humanity".

The Open Arms has been anchored since Thursday within swimming distance of Lampedusa island, and some of those rescued have spent 18 days on board.

But far-right Salvini, who has plunged the Italian government into crisis by calling for fresh elections, has refused to allow migrant rescue vessels to dock as part of his hardline policies.

"What Salvini is doing in relationship with the Open Arms is a disgrace to humanity as a whole," Spain's Defence Minister Margarita Robles told reporters in Madrid. 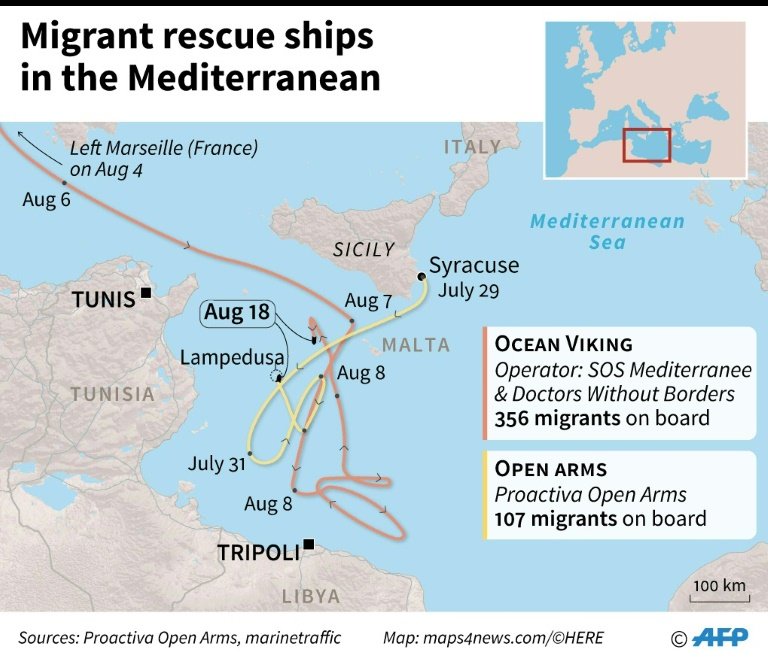 Salvini was "putting human lives at risk" for "exclusively electoral purposes", she added.

These migrants were suffering from wounds or infections and like the majority on board, post-traumatic stress, it said, adding in a later tweet that the situation was becoming "more complicated every minute."

But the charity continues to demand that all onboard be allowed to disembark at Lampedusa.

Spain said late Sunday the ship could dock in Mallorca in the Balearic Islands after an initial offer to go to the southwestern port of Algeciras was rejected because it was too far.

But the charity on Monday described the offer of Mallorca as "totally incomprehensible".

"While our boat is 800 metres (yards) off the coast of Lampedusa, European states are asking a small NGO like ours to face... three days of sailing in harsh weather conditions," it added in a statement.

In an interview with online newspaper eldiario.es, Open Arms founder Oscar Camps suggested Madrid could send a faster boat to pick up the migrants or fly them from Lampedusa to Spain.

"It is urgent to end this inhumane and unacceptable situation which the people who we rescued at sea are living," Open Arms said in a statement.

The Spanish government denied the existence of an agreement with Italy and said it had not received a "clear and direct reply" from the NGO to its Mallorca offer.

"It is not a question of accepting or not accepting" the offer, an Open Arms spokeswoman said.

"The answer we gave them is that we cannot guarantee the safety of these people on our boat. Since Italy and Spain have assumed responsibility for these people, they should find a solution."

In Spain, the foundation of football giants Barcelona tweeted its support Monday for "our Open Arms friends" and said it wanted the "unfair situation of the ship to be resolved as soon as possible".

The European Commission, the executive arm of the EU, on Monday welcomed Spain's "good will" but urged "all member states and NGOs to cooperate and find a solution which will allow the people on board the Open Arms to disembark as soon as possible".

Salvini argues Italy bears an unfair burden as the first port of call for rescued migrants and it is up to EU partners to do their part to resolve the crisis.

Spain's Deputy Prime Minister Carmen Calvo said Italy has closed its port to the Open Arms in a "totally illegal and incomprehensible way" but she also criticised the NGO for not accepting Madrid's permission to dock.

"We offered them everything because we don't want these lives to be in danger any longer," she told news radio Cadena Ser.

Over the past 18 days, 479 migrants arrived on Italy's shores, more than 100 of them on Lampedusa, according to the interior ministry.