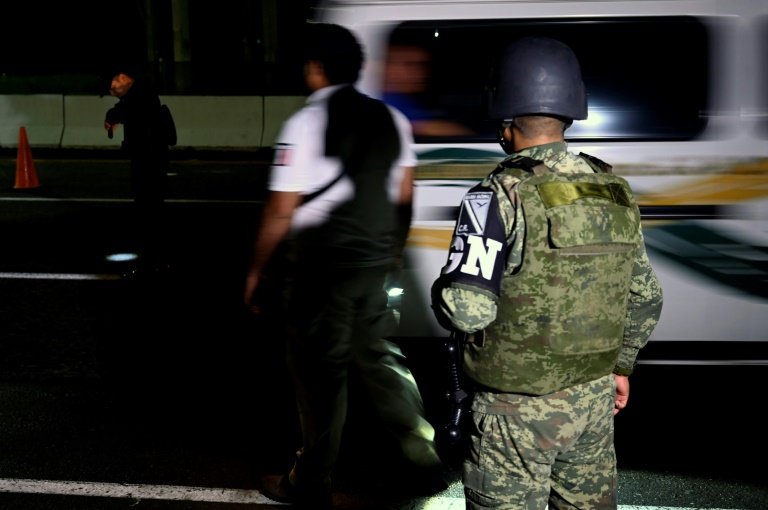 Watched by a member of Mexico's new National Guard (R), a Mexican migration officer waits for undocumented migrants at a checkpoint on the outskirts of Tapachula, Chiapas state, Mexico, near the border with Guatemala, on June 19, 2019 / © AFP/File

More than 19,000 of those migrants have been found in the past two months, it said.

That period coincides with a Mexican crackdown on undocumented migration toward the United States, under a deal to avert tariffs that President Donald Trump had threatened to impose if Mexico did not do more to stem a recent surge of Central Americans arriving in the US.

Critics of the deal say Mexico's new anti-migration measures -- including the deployment of 21,000 National Guardsmen to tighten its borders -- will push more migrants to resort to human traffickers, who often have links to powerful drug cartels.

The foreign ministry said Mexican authorities are working to prevent migrants from being smuggled on trains, commercial buses and semi-trucks.

"That is by far our main worry, and the reason that these operations" to rescue migrants from traffickers "are so important," he told a press conference, speaking alongside Lopez Obrador.

The foreign ministry said authorities found 1,707 migrants in 21 semi-trucks in the past two months. In one incident, in Veracruz state, 791 people were being transported with no ventilation, said Ebrard.

"They are putting people at risk, that is the biggest concern," he said.

Migrants rescued from human traffickers undergo a "migratory review" to determine whether they are eligible to remain in Mexico, a foreign ministry official told AFP.

Ebrard added that Mexico has agreed to fund programs to create 20,000 jobs in El Salvador and 13,000 in Honduras, in a bid to fight the poverty and violence driving the recent exodus from Central America.

Mexico is urging international donors -- including the United States -- to fund a decade-long, $10-billion-a-year economic development package for the region in order to address the underlying problems driving migration.

The Mexican government has itself pledged $100 million for development programs in El Salvador, Guatemala and Honduras.

However, Trump's threat to impose tariffs on all Mexican goods has placed him in the awkward position of now having to crack down on migration.

Mexico promised in June to take "unprecedented" steps to reduce the number of migrants reaching the US-Mexican border.

Mexico detained just 6,600 migrants in Lopez Obrador's first month in office. Since then, under pressure from Trump, that number has risen steadily, to nearly 31,600 in July, according to the interior ministry.