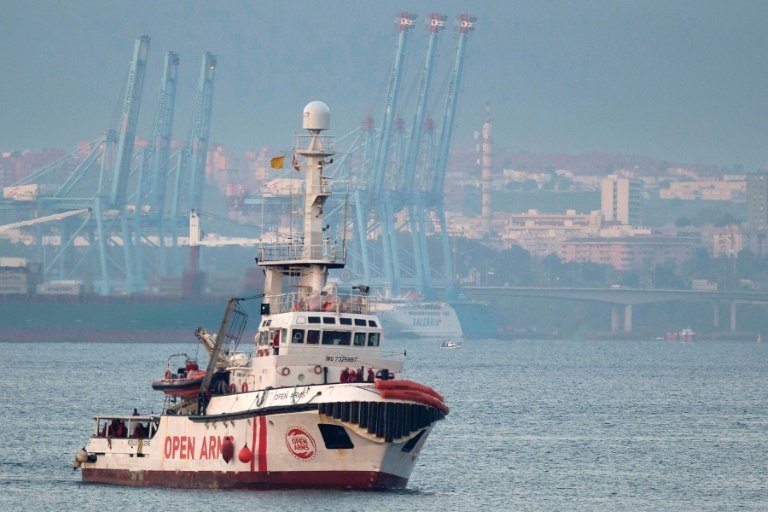 The ship of Spanish NGO Proactiva Open Arms, pictured in 2018, is currently sailing off the coast of Italy's southern Lampedusa island / © AFP/File

A Spanish charity which operates a migrant rescue boat in the Mediterranean said Wednesday that a court in Italy has suspended a government decree banning its vessel from entering Italian territorial waters.

The Open Arms boat is currently sailing off the coast of Italy's southern Lampedusa island with 147 migrants who were plucked from boats in the Mediterranean this month. Both Italy and Malta refused it permission to dock and unload its passengers.

"We won the appeal which we filed at an administrative court in Italy against the security decree" the founder of Proactiva Open Arms which operates the boat, Oscar Camps, told a news conference in Madrid.

The decree was signed by Italy's far-right Interior Minister Matteo Salvini at the beginning of August banning the Open Arms from entering Italy's territorial waters, saying it was needed to protect public order.

Under the decree, the Proactiva Open Arms could be slapped with a fine of up to one million euros ($1.1 million) and its boat seized if it disobeyed.

But Camps said the court was also allowing the 147 migrants currently on board the Open Arms to disembark in Italy.

"All that is missing is that we be assigned a port," Camps said.

Since coming to power in June 2018, Salvini has repeatedly taken a hard line against migrants.

"It's a success. International maritime law prevails," Camps said, before adding that in Italy "everyone does not think like Salvini".

He recalled that under international agreements, rescued migrants should be taken to the closest available port which in the case of the Open Arms is in Italy or Malta.

Earlier on Wednesday, Camps warned that fights may break out at any moment among the migrants stranded on the vessel.

"We could have a fight within a half-hour with a serious injury, or worse, someone could die on board due to violence," he told Spanish radio station Cadena Ser.

"It would be a tragedy, it would be unforgivable."

The 19 crew members on the Open Arms are finding it harder to contain tensions on board, he added.

Many of the migrants, mainly from Africa, are suffering from "very high levels of post-traumatic stress" and anxiety over their future.

They must share just two bathrooms and a living space of only 180 square metres (2,000 square feet), Camps said.

Two babies were evacuated by helicopter from the ship to Malta on Wednesday for health reasons, Camps said.