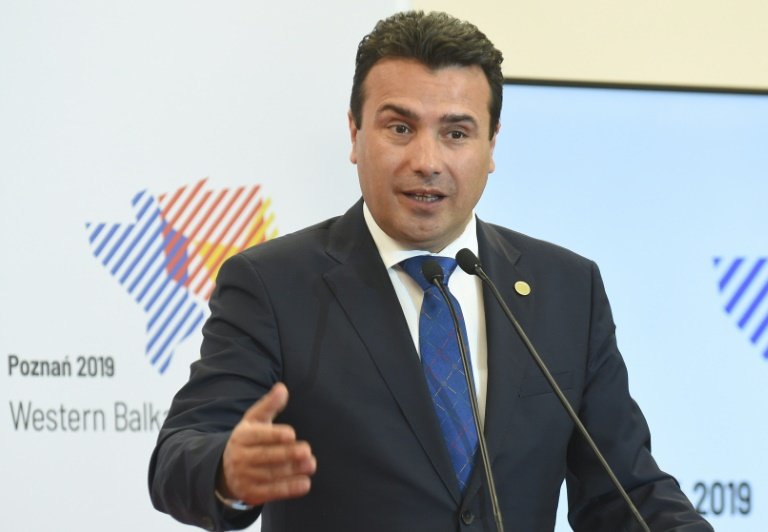 Zaev later apologised for using the slur on Twitter, in a statement that some found equally offensive / © AFP/File

North Macedonia's Prime Minister Zoran Zaev has apologised for using a gay slur while trying to defend his government against a corruption scandal that has ensnared justice officials.

North Macedonia's Prime Minister Zoran Zaev has apologised for using a gay slur while trying to defend his government against a corruption scandal that has ensnared justice officials.

Zaev said Tuesday he would "not allow a few criminals, a vain journalist and -- I ask the LGBT community to forgive me -- one faggot, to overthrow the government".

He was referring to a gay TV channel owner, Bojan Jovanovski, at the heart of the corruption case transfixing the public.

Zaev later apologised for using the slur on Twitter, in a statement that some found equally offensive.

"I apologise. I used the word as a character trait, not as a sexual affiliation," he wrote, adding that he was "fighting for the rights of the LGBT community as much as possible".

"Statements like this can spark more violence towards the LGBT community."

Journalist Meri Jordanovska said the apology was "even more insulting for the LGBT community".

Zaev had just returned from vacation to battle a growing controversy at home over the corruption case.

The scandal erupted in July when Jovanovski and an associate were arrested and accused of bribing a wealthy businessmen, Orce Kamcev, who is a suspect in a separate money-laundering case.

The pair allegedly offered to reduce the suspect's jail time through their connections with the special prosecutor in charge of the case.

A right-wing Italian newspaper has been publishing recordings of the apparent bribe negotiations -- including one with the voice of the head special prosecutor, Katica Janeva, suggesting she was involved.

Janeva, who resigned in July, has confirmed the recording is genuine but claims the conversation was innocent.

The scandal has delivered a blow to the reputation of the crime-fighting office that was set up during a 2015 political crisis to investigate crimes linked to the former administration.

It also threatens to blight North Macedonia's record at a sensitive moment, with the country hoping the EU will greenlight a bid to open accession talks in October.

The Balkan country, praised for recently overcoming a long-running row with Greece over its name, held its first gay Pride parade in June.

The event drew hundreds of people but also attracted a smaller counter-rally by a conservative group for "family values".