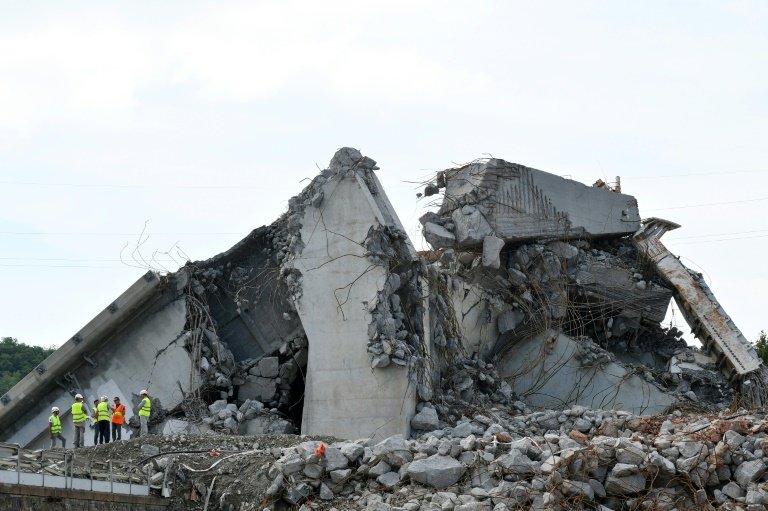 A year on, a legal battle is still raging over who is responsible for the Genoa motorway bridge disaster / © AFP

Relatives and emergency workers wept at a ceremony Wednesday marking a year since the Genoa motorway bridge collapse that killed 43 people, as Italy grapples with a political crisis sparked by far-right leader Matteo Salvini.

A mass took place in a warehouse near the spot where a section of the Morandi highway fell during heavy rain on August 14, 2018, hurling dozens of cars and several trucks onto railway tracks below.

Rubble and mangled steel still lie strewn across the site. The bridge's two remaining towers were demolished in a giant blast in June to make way for a new structure.

Tearful relatives embraced each other and emergency workers, while other laid flowers at the foot of the burgeoning new bridge.

The mass, celebrated by Genoa archbishop Angelo Bagnasco, began with the reading out of the names of each of the 43 victims, watched by hundreds of their loved ones. "We feel that the new bridge will represent a symbol of rebirth," Conte said.

Genoa "has rekindled the light and restored hope to an entire country," he said.

The city's church bells rang and port sirens wailed after a minute's silence at 11:36 am (0936 GMT), the exact moment the bridge collapsed last year.

Bereaved relatives asked for representatives of the company in charge of the motorway to leave before the mass began.

Mayor Bucci had invited Autostrade per l'Italia (ASPI) employees to attend, but the anger and grief among relatives who blame the Benetton family-owned company are still raw.

ASPI said that it had at the same moment flashed a message to all its traffic information signs throughout Italy's motorway network with "14/8/2018 - 14/8/2019. In memory of the victims of Genoa".

The anniversary comes as Italy faces the potential downfall of its government after Interior Minister Salvini of the League party pulled the plug on his populist alliance with the anti-establishment Five Star Movement (M5S) last week.

In addition to Conte and President Sergio Mattarella, all the key players involved in Rome's political drama attended Wednesday's ceremony, including Salvini and his former coalition partner and M5S head Luigi Di Maio. 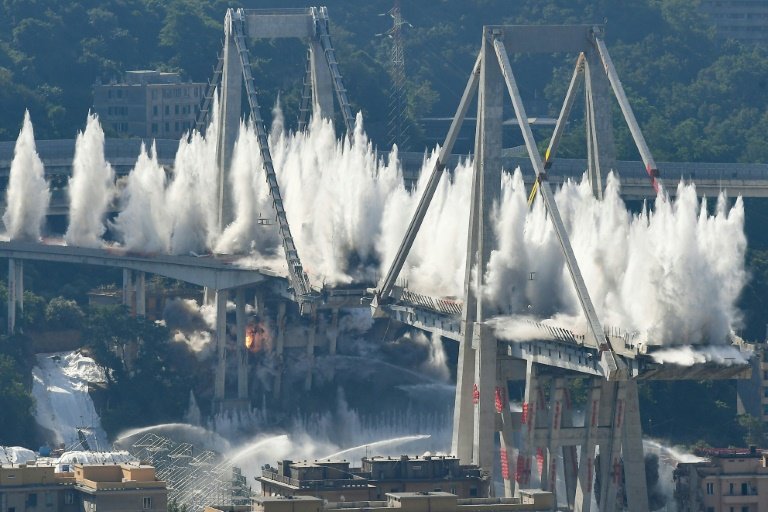 The ceremony comes a day after the Senate rejected Salvini's call for a swift no-confidence vote, deciding instead that Prime Minister Conte would address the crisis on August 20.

Senators were recalled at the height of the holiday season after political groups on Monday failed to agree on a timetable for the ballot demanded by Salvini.

Officials in Genoa expressed concern that the power struggle could hamper the progress of the new bridge, due to be completed early next year.

"I hope that this government crisis won't cause delays to completing this important infrastructure," district mayor Federico Romeo told AFP of the crucial transport artery. 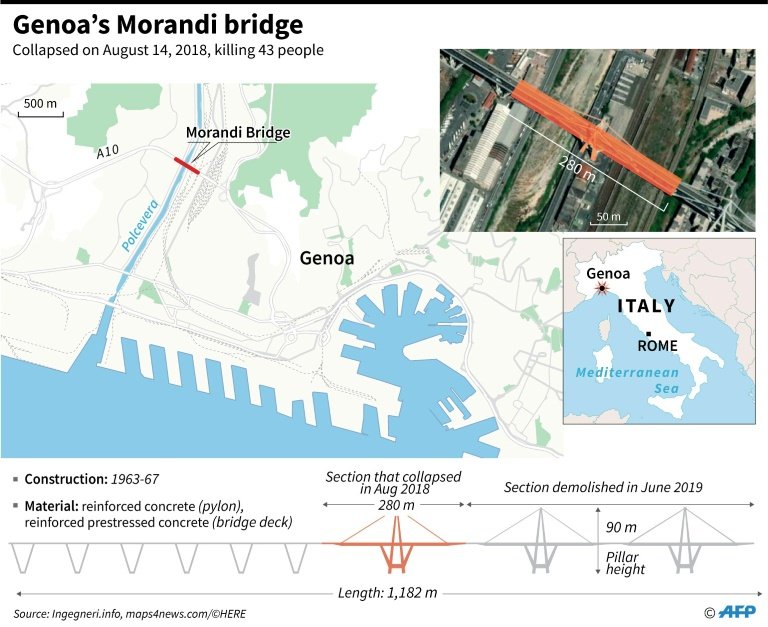 The new steel and concrete motorway bridge, designed by Italian architect and Genoa native Renzo Piano, is scheduled to be open for traffic in April 2020.

The streamlined and luminous white bridge will represent "three ships that rise to the sky and unite to form a single structure more than a kilometre long," Piano told Wednesday's edition of the newspaper La Repubblica.

He had said last year he hoped the bridge "will last for a thousand years". 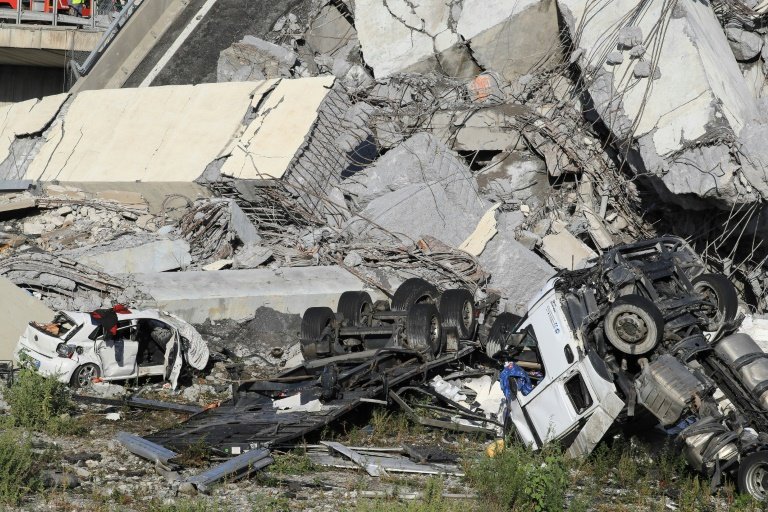 A legal battle is still raging over who is responsible.

ASPI is defending itself against victims' families and politicians, mainly from the M5S, who say the company put profit over safety.

The Morandi bridge, named after the architect who designed it in the 1960s, "collapsed because it could no longer stand," Genoa prosecutor Francesco Cozzi said recently.

A total of 71 people are accused in the legal case, from managers in two Benetton companies to civil servants, involving more than 100 lawyers, 120 experts, 75 witnesses and tonnes of documents and other evidence.

The fallout from the bridge collapse was one of many points of disagreement between Salvini's League and Di Maio's M5S.

The M5S wanted ASPI's concessions to be immediately taken away, while the League, which is close to northern Italy's industrial sector, remained circumspect on attributing blame.