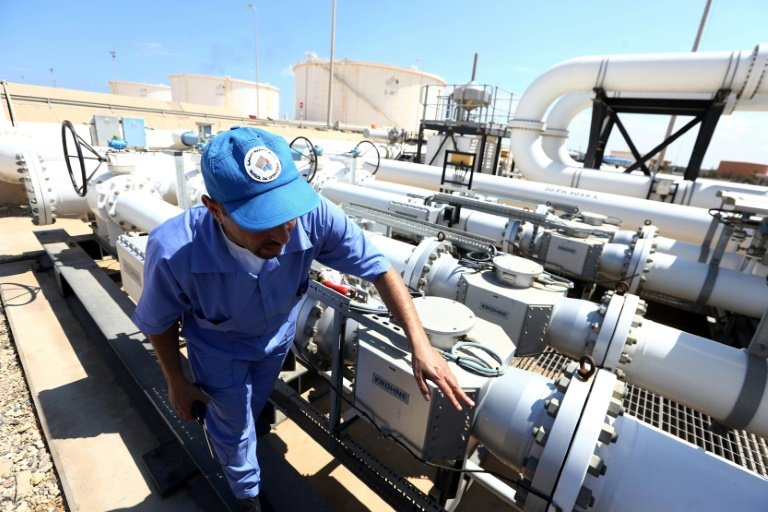 Oil exports are the source of almost all state revenue in Libya, which has the biggest proven reserves of crude in Africa / © AFP/File

The NOC "hereby declares a state of force majeure on crude oil loadings at Zawiya port," it said in a statement on its website late Saturday.

"This is the result of an unlawful Sharara pipeline valve closure by an unidentified group between Hamada and the Zawiya port (on Friday evening), resulting in production being suspended," it said.

Force majeure is a legal measure that frees a company from contractual obligations due to circumstances beyond its control.

Al-Sharara, about 900 kilometres (560 miles) south of Tripoli, produces 315,000 barrels per day -- nearly one third of Libya's crude output -- but is frequently attacked and blocked by militias.

NOC chairman Mustafa Sanalla condemned the latest pipeline closure as "criminal activity" and said the firm and authorities would "find and prosecute" those responsible.

Oil exports are the source of almost all state revenue in Libya, which has the biggest proven reserves of crude in Africa.

But after the fall and killing of longtime dictator Moamer Kadhafi in a NATO-backed 2011 uprising, the country fell into chaos as multiple armed groups vied for control.

Oil wells, pipelines and loading terminals have regularly been attacked or occupied by groups demanding political concessions or money.

The NOC said the latest shutdown had blocked exports worth some $19 million per day.

The NOC had previously declared "force majeure" at the Al-Sharara site in December after it was seized by an armed group, but it re-opened after forces led commander Khalifa Haftar took control in February.

Haftar, who backs an eastern-based administration that opposes Libya's internationally recognised unity government, controls much of the country's east and south.

In April he launched an offensive on Tripoli, but has met stiff resistance from forces that back the unity government.

Haftar's self-styled Libyan National Army already controls a series of vital oil terminals in the country's east, but has handed their management to the NOC which has tried to remain neutral.