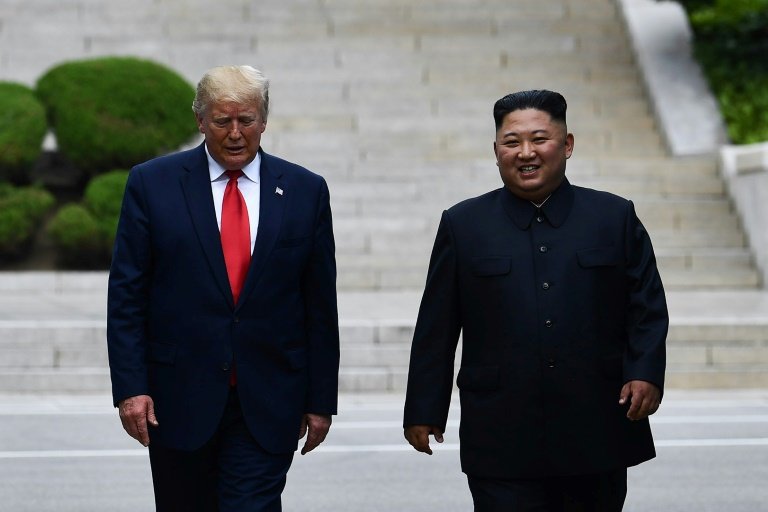 It was a historic first as Donald Trump stepped over a small concrete block onto North Korean soil. But the event was shrouded in uncertainty until just an hour before.

Here are some of the key quotes from the hastily-arranged "third date" between the pair that was supposed to be a brief hello but turned out to be somewhat more substantive.

"What's going to happen is over the next two or three weeks, the teams are going to start working to see whether or not they can do something. Very big stuff. Pretty complicated, but not as complicated as people think." (Trump on forthcoming talks)

"Some people say this meeting was pre-arranged through the letters you have sent me, but I myself, was surprised when yesterday morning you expressed the willingness to meet with me here" (Kim Jong Un).

"Knowing the press like I do, if he had decided not to come, you would have hit me." (Donald Trump on the implications of a no-show from Kim).

"Reading the tweet, I felt that a flower of hope was fully blossoming on the Korean Peninsula" (South Korean President Moon Jae-in).

"He doesn't do news conferences, in case you haven't heard" (Donald Trump talking about Kim).

"For some reason we have a certain chemistry" (Trump talking about his unlikely bromance with Kim).

"Stepping across that line was a great honour" (Trump after his historic step into North Korea).

"If it wasn't for the great relationship with you, I don't think this meeting would have been made possible in just one day." (Kim on his connection with Trump)

"Get the photographers out the way" (Unknown journalist heard to voice expletive-laced frustration as North Korean snappers photobomb the historic shot).

"This was a great day. This was a very legendary, very historic day." (Trump seemed to have enjoyed his day trip to North Korea).