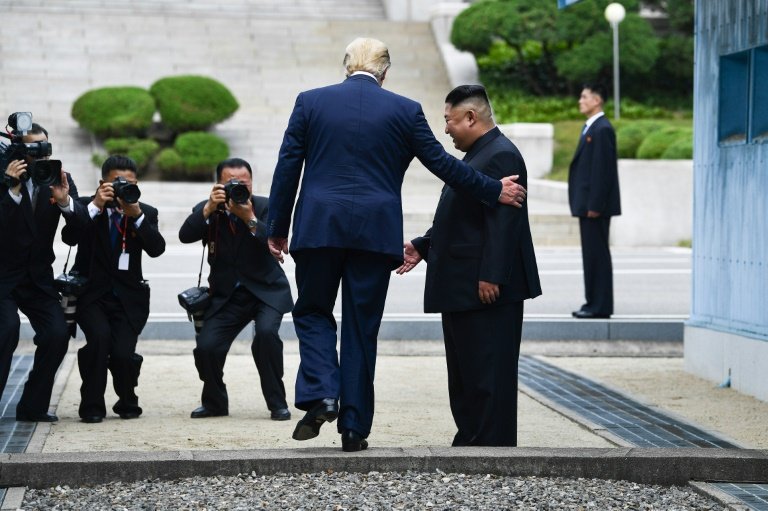 One small step for a man... Trump became the first sitting US president to set foot in North Korea when he crossed the military demarcation line / © AFP

Donald Trump stepped onto North Korean soil Sunday as he met Pyongyang's leader Kim Jong Un in the Demilitarized Zone dividing the peninsula, in a symbolic diplomatic spectacle and a first for any American president.

Moments after becoming the only sitting US president to set foot inside North Korea, Trump brought Kim back over the dividing line for a meeting where they agreed to start working-level talks on Pyongyang's nuclear weapons.

Trump, 73, also said he had invited 35-year-old Kim to the White House "anytime he wants to do it". 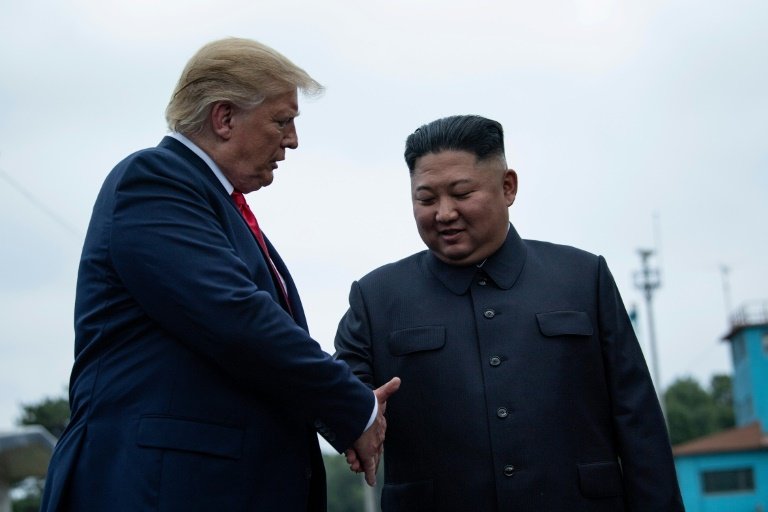 US President Donald Trump and North Korea's leader Kim Jong Un shake hands before a meeting in the Demilitarized Zone (DMZ) on June 30, 2019, where they agreed to start working-level talks on Pyongyang's nuclear weapons / © AFP

As they sat down for discussions, Kim said their "handshake of peace" in a location that was "the symbol of the division of north and south" showed that "we are willing to put the past behind us".

The impromptu meeting in the DMZ -- after Trump issued an invitation on Twitter the day before -- came with negotiations between Pyongyang and Washington at a deadlock.

Their first summit took place in a blaze of publicity in Singapore last year but produced only a vaguely worded pledge about denuclearisation. A second meeting in Vietnam in February that intended to put flesh on those bones broke up without agreement. 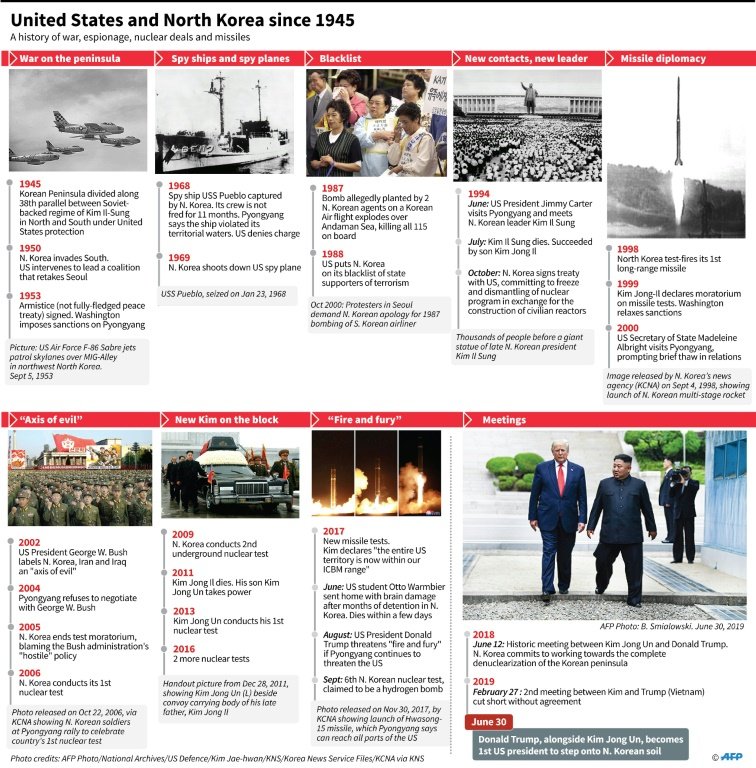 Contact between the two sides has since been minimal -- with Pyongyang issuing frequent criticisms of the US position -- but the two leaders exchanged a series of letters before Trump issued his offer to meet at the DMZ.

Trump's entry onto North Korean soil -- which he said was uncertain until the last moment -- is an extraordinary sequel to the scene at Kim's first summit with Moon Jae-in last year, when the young leader invited the South Korean president to walk over the Military Demarcation Line, as the border is officially known.

A Kim trip to Washington would be even more spectacular, although Trump said the visit would happen "at the right time". 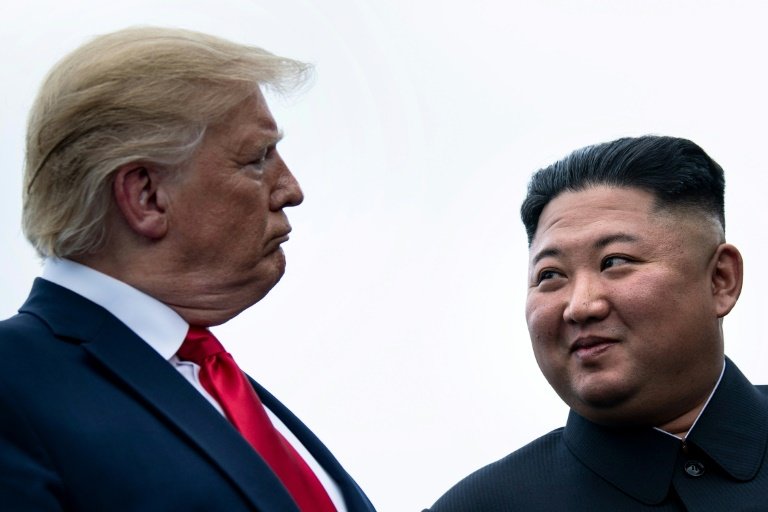 US President Donald Trump and North Korea's leader Kim Jong Un met in the no-man's-land splitting the Korean peninsula, where the two sides and their allies fought each other to a standstill in the 1950-53 Korean War / © AFP

Moon seized on last year's Winter Olympics to broker the process between Pyongyang and Washington, after tensions soared in 2017 when the North carried out multiple missile launches and its biggest nuclear test to date, while Trump and Kim traded mutual insults and threats of war.

The significance of the meeting in the no-man's-land splitting the peninsula -- where the two sides and their allies fought each other to a standstill in the 1950-53 Korean War -- was "obvious", said Stimson Centre Asia analyst David Kim.

"It's historic for Trump to be the first US President (to) enter North Korea soil, historic for Moon to meet, albeit briefly, with both leaders."

The meeting had the "potential to kick-start stalled negotiations", he told AFP, but added that working-level discussions would be crucial.

"What we need is substance, not theatrics." 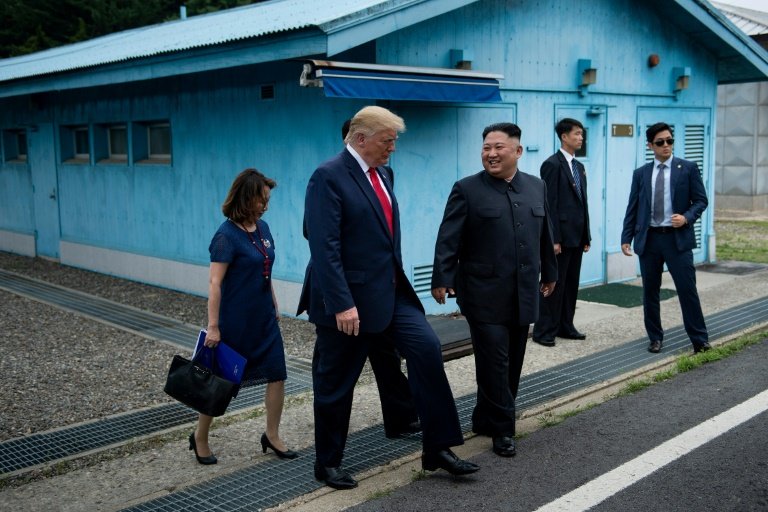 North Korea's leader Kim Jong Un and US President Donald Trump walk together south of the Military Demarcation Line that divides North and South Korea, after Trump briefly stepped over to the northern side in a historic first / © AFP

In Washington, Democratic White House contenders guardedly welcomed the meeting of the two leaders though some questioned the wisdom of granting Kim "legitimacy" despite the lack of progress on curbing North Korea's nuclear arsenal.

"I have no problem with him sitting down with Kim Jong Un in North Korea or any place else. I don't want it to be a simple photo opportunity," said Senator Bernie Sanders.

The North has carried out six nuclear tests and developed missiles capable of reaching the entire US mainland.

"What's happened here is that this president has raised the profile of a dictator like Kim Jong Un," while "we haven't gotten anything out of it," another Democratic White House hopeful, Julian Castro, said on ABC.

The DMZ has been a regular stop for US presidents visiting the South, a security ally, while Panmunjom saw the first two summits between Moon and Kim last year.

"This was a great day," the US president said before flying out on Air Force One.

"This was a very legendary, very historic day."