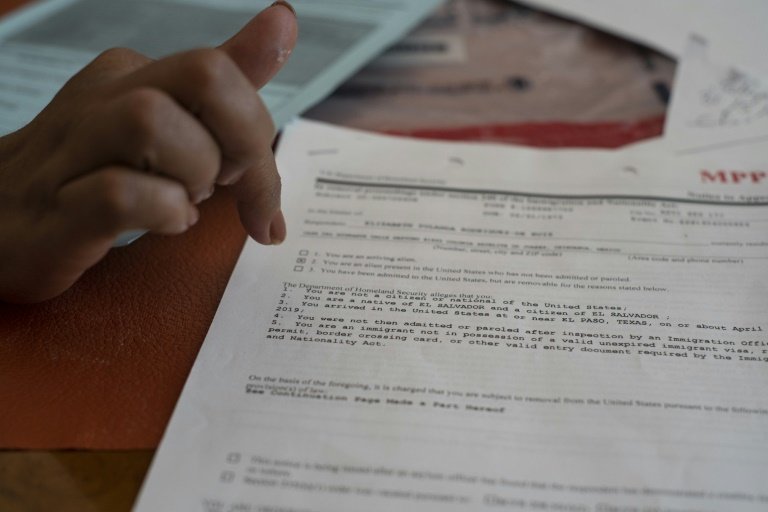 These are the Application for Asylum documents Yolanda, a Salvadoran migrant from a rural village, must fill out -- in English, in triplicate -- before her next asylum hearing / © AFP

Exactly 146 days after leaving home in El Salvador, a petite, soft-spoken woman named Yolanda sat in a Texas courtroom seeking to reunite with her year-old grandson and teenage daughter, separated when they crossed the Mexican border.

Yolanda -- who asked that her last name be withheld -- is one of thousands of Central American migrants seeking asylum in the United States who were told to wait in Mexico for their day in court.

Since then, the 46-year-old has been battling an opaque and often dysfunctional US immigration system, whose requirements even lawyers find hard to navigate.

Fifty-nine days after surrendering to Border Patrol agents in El Paso, and 56 after receiving a court date, Yolanda now sits before Judge Nathan L. Herbert, a former Homeland Security attorney and an immigration judge for less than a year.

Yolanda tells Herbert she and her daughter received death threats after helping lock up a Salvadoran gang member.

"We came as a family, but since she's 19 and has a baby she was considered an adult," she tells the judge through an interpreter. "So they separated us." 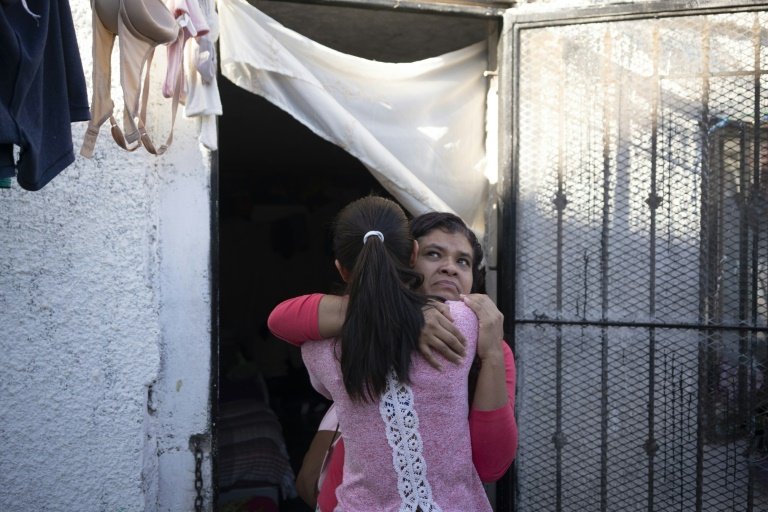 Yolanda tearfully hugs a woman at the "El Buen Pastor" Methodist church before setting off for a court hearing in El Paso, unsure if she'll be back / © AFP

Yolanda instead was entered into the Migrant Protection Protocols program -- better known as "Remain in Mexico" -- the latest plan to stem the flow of asylum seekers.

After nine days in US detention she was sent to Ciudad Juarez, El Paso's sister city across the Rio Grande, "with no explanation."

There are some 19,000 asylum seekers in Mexican border cities waiting for a US court hearing, according to researchers, including at least 5,000 in Ciudad Juarez.

Shelter manager Marta Esquivel says it was designed to house 60 people -- but now has 120, mostly Central Americans but also from places like Uganda and Venezuela.

"We can't leave them out in the street," Esquivel says.

Yolanda, from a small town in rural El Salvador, is headed to court with Oswaldo, 24, a fellow Salvadoran also fleeing gang violence.

On the road Yolanda calls her daughter Daniela, now living with a relative in California. 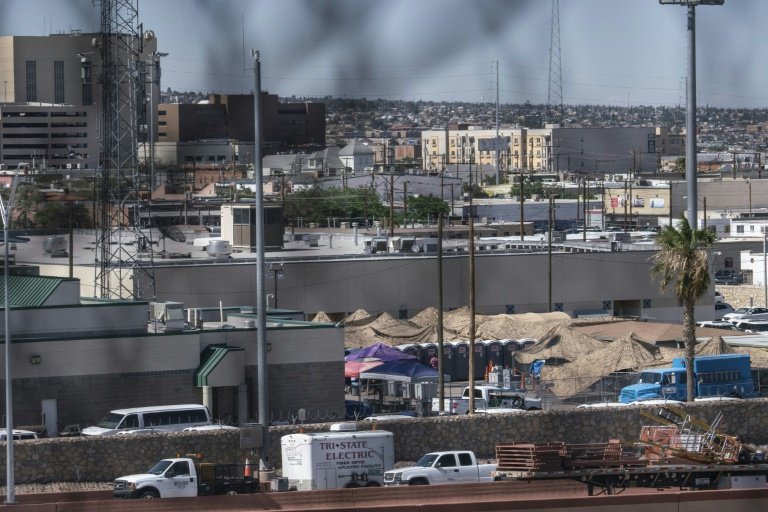 A view of the Richard C. Wright Federal Building in El Paso where asylum hearings are held -- as seen from the Mexican side of the Paso del Norte International Bridge / © AFP

Her toddler grandson, Matias, came down with a fever while the family was being held in a detention center migrants have dubbed "La Hielera" (The Icebox) and where the US Department of Homeland Security's own watchdog in May recommended "immediate steps to alleviate dangerous overcrowding."

When Daniela and Matias were released they boarded a flight to California -- but the boy was still so feverish the pilot made an emergency landing in Denver.

Matias was rushed to a hospital where he spent two weeks recovering.

"He's better, but now we have to pay the hospital," Daniela tells her mother.

With tears streaming down her cheeks, Yolanda tells her daughter she expects to be detained again after her hearing.

"If you call and my phone seems turned off, that means I'm already locked up."

Just before 9 am, Yolanda and Oswaldo reach the busy Paso del Norte bridge and join other Central Americans heading to the same hearing.

A knot of American pro-bono lawyers shepherd them across, telling them over the din of traffic what to expect. 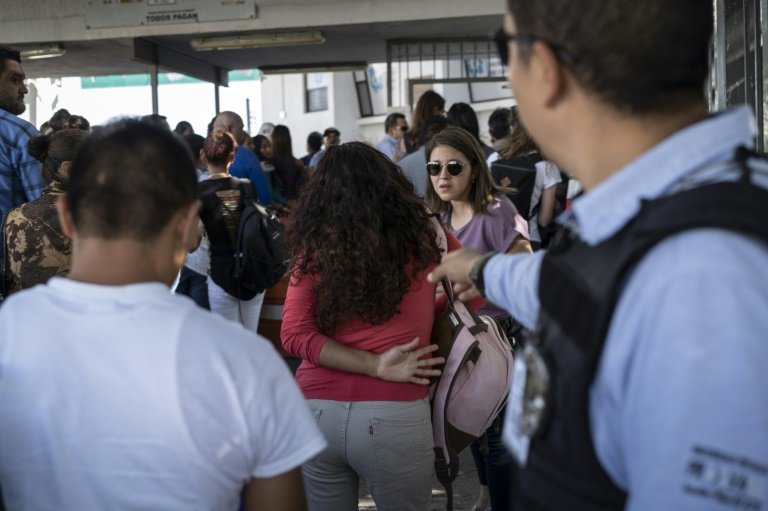 Yolanda enters the Paso del Norte International Bridge, on her way to the court hearing in El Paso / © AFP

In El Paso, Immigration and Customs Enforcement (ICE) agents pat them down and take their fingerprints.

Then they are whisked off in vans to the federal courthouse where the asylum seekers -- 28 in all, including small children -- are escorted into a waiting room.

Harsh fluorescent light reflects off the tile floor and gray walls. There is utter silence -- no TV, no phone chatter -- as security guards hand each person a sandwich, a bag of chips, and a bottle of water.

The pro-bono lawyers arrive, including two who flew from Seattle as local resources are so overwhelmed.

"You can ask to be deported and fly back to your country," she says.

There are no takers.

Yolanda is one of judge Herbert's last cases of the day. She tells him about the death threats, about her daughter and grandson. 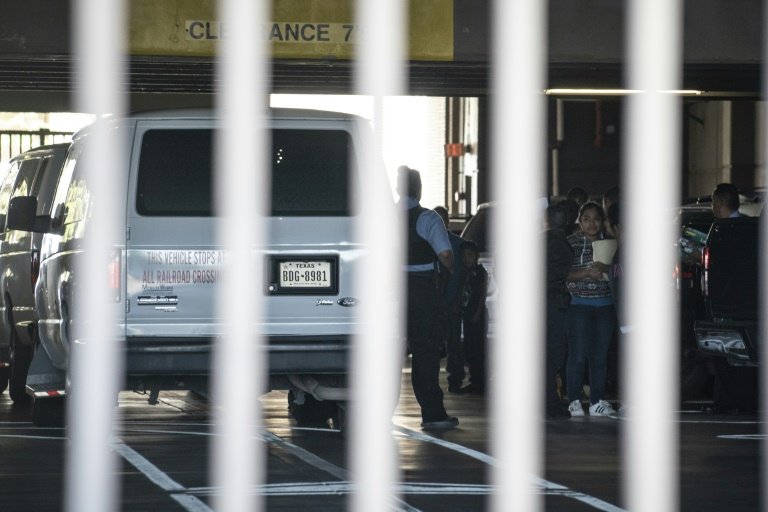 Migrants like Yolanda (not pictured) are brought in vans to the Richard C. White Federal Building for asylum hearings / © AFP

"Based on what you've told me you're eligible for asylum," Herbert says.

The next step: fill out the 13-page form I-589 Application for Asylum.

In triplicate. In English.

Any supporting documents have to be printed, recordings translated and transcribed, and everything presented at the next hearing in 47 days.

Herbert asks if Yolanda has been a victim of a crime or abuse in the United States.

"Yes, I handed myself in. When you're an immigrant they treat you like an animal."

Herbert winces at her answer.

Yolanda also tells him she is afraid to return to Mexico.

Very well, the judge says, you can speak tomorrow by phone with an immigration agent and explain your reasons. 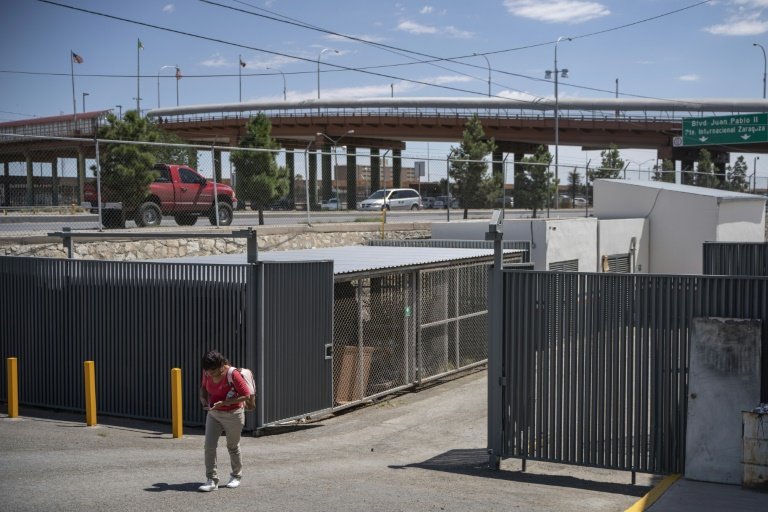 Yolanda, a migrant from El Salvador, exiting the National Institute of Migration in Ciudad Juarez after spending two nights in a holding cell in El Paso, Texas; she was sent back to Mexico until her next US asylum hearing / © AFP

In her phone call, Yolanda says her first stop in Ciudad Juarez was in a shelter where one day men wielding automatic rifles burst in.

They had picked up two migrants outside and gave them a bloody beating, claiming they were smugglers encroaching on their turf.

"They beat people with rifle butts," Yolanda recalled, shaking. "They held the pastor at gunpoint and put a plastic bag over her daughter's head."

Ciudad Juarez, a shipment point for illegal drugs, is one of Mexico's most violent cities with 1,247 homicides last year.

The US agent was unimpressed, and Yolanda was told to return to Mexico. But US officials kept her Salvadoran ID pending the next court date -- leaving her in limbo, unable to work.

"I'm really disappointed," she said. "They don't give you a chance."