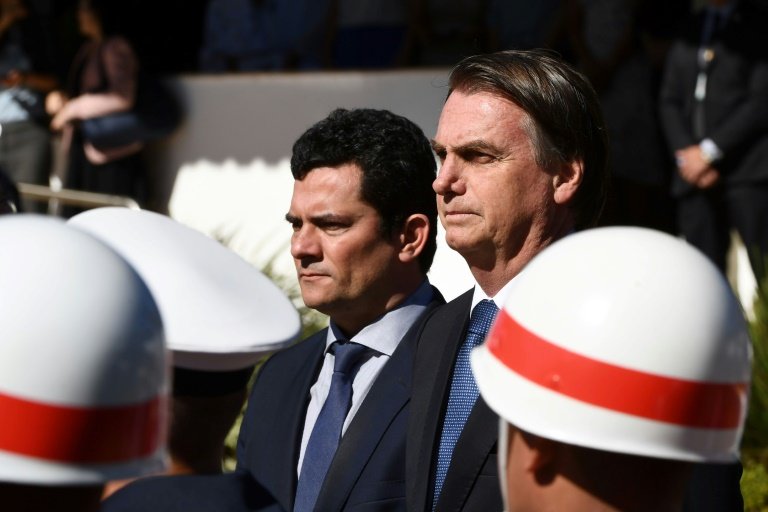 Brazilian President Jair Bolsonaro (R) and his Justice Minister Sergio Moro, who is under fire over accusations he acted improperly as a judge in a sprawling corruption case / © AFP

A hero to Brazilians fed up with corruption, Justice Minister Sergio Moro is wounded but defiant after accusations of unethical -- or even illegal -- behavior in a sprawling anti-graft investigation that has polarized the country.

Moro, the powerful anticorruption judge behind the so-called Car Wash probe that upended the country's politics by uncovering large-scale looting of state oil company Petrobras, is at the center of a growing scandal that has triggered calls for his resignation.

Telegram messages leaked to The Intercept investigative website purportedly show Moro conspired with Car Wash prosecutors to keep leftist icon Luiz Inacio Lula da Silva -- who he sent to jail for taking bribes and laundering money -- out of the 2018 presidential election, which he was expected to win.

The incendiary claims published Sunday ignited a firestorm in Brazil's mainstream media and on social networks, with opinion on Moro deeply divided.

In the three days since the explosive reports involving his star minister, however, far-right President Jair Bolsonaro has been uncharacteristically silent.

Bolsonaro met with Moro on Tuesday morning, but when questioned by reporters later about the claims against him, the president swiftly shut down the interview.

Accused of improperly advising Car Wash prosecutors in their years-long probe, Moro has said there was nothing abnormal about his relationship with the investigators.

He remained defiant Wednesday, tweeting: "Hackers of judges, prosecutors, journalists and perhaps parliamentarians ... or fake scandals will not interfere with the mission," which includes getting approval for his anticrime bill in a hostile Congress.

While Bolsonaro has not publicly defended Moro, the embattled minister has drawn support from the powerful military.

"Left-leaning members of Congress, newspapers and lawyers associations may demand Moro's resignation, but this comes down to the president," said Robert Muggah, research director at the Igarape Institute, a think tank in Rio de Janeiro.

"If the pressure grows unbearably, that could force his hand."

Moro's appointment to Bolsonaro's cabinet was a popular decision with those who saw the stern, square-jawed ex-judge as a hero for helping to expose and jail some of Brazil's best known and most powerful politicians and business executives.

But his critics saw it as proof Moro pulled the strings of justice to manipulate the country's politics.

No one has been untouchable in the investigation, which began in 2014 and has become one of the world's biggest corruption sweeps ever, as it tackled business empires like the powerful Odebrecht construction company and took down a string of top-level players from across the political spectrum.

But opponents say he targeted Lula and his once-unstoppable Workers' Party most of all.

Lula, who led Brazil through a historic boom from 2003 to 2010, is serving a reduced jail term of eight years and 10 months after being convicted of accepting a seaside apartment as a bribe for helping the OAS construction company get lucrative deals with Petrobras.

A second conviction was handed down in February for which he was sentenced to almost 13 years.

Lula has denied all the corruption charges against him, arguing they were politically motivated to prevent him from competing in the 2018 election, which Bolsonaro went on to win.

Born in 1972 in Maringa, near Curitiba, Moro studied law, earned a doctorate and became a federal judge in 1996.

He completed his training at Harvard law school, going on to specialize in money laundering crimes. He took inspiration from Italy's "Clean Hands" anti-corruption drive in the 1990s, which led to the conviction of half the country's lawmakers.

A married father of two, Moro's unprecedented assault on business-as-usual has won him many fans. But he also has accumulated plenty of enemies.

Opposition parties have called for a congressional investigation into the relationship between Car Wash investigators and judges, including Moro.

Writing in the daily Folha de S.Paulo on Wednesday, columnist Monica Bergamo said Moro's opponents in Congress were still deciding how to attack the minister.

"There is an agreement: it is necessary to have patience and wait for Moro to 'bleed' more."