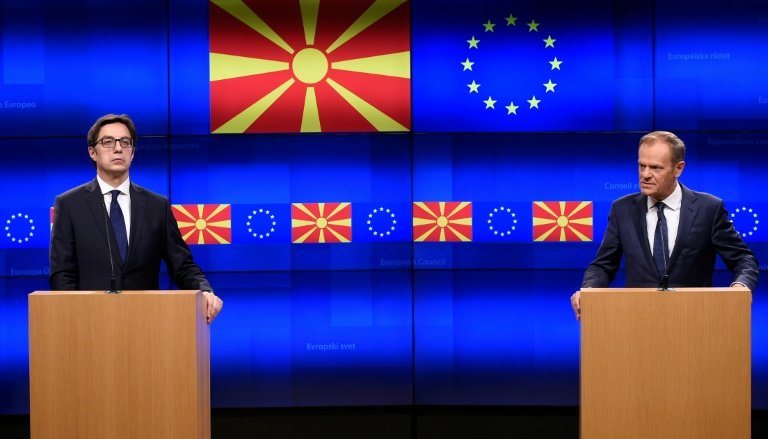 EU Council President Donald Tusk said Wednesday the bloc should start accession talks with North Macedonia and Albania, but warned there would be no quick decision, with several member states opposed.

Tusk said the Balkan states had done "everything that was expected" to move their EU membership bids forward but some countries, including France and the Netherlands, are firmly against further expansion.

Last month the European Commission, the bloc's executive arm, said both countries had carried out reforms demanded by Brussels and formal membership talks should be launched.

"I personally believe that there can only be one decision: to launch the negotiations in line with the European Commission's recommendations, both with North Macedonia and Albania," Tusk told a press conference with the North Macedonian President Stevo Pendarovski.

"The question today is not if but: 'When?' If I am a bit cautious, it is because I know that, sometimes, reaching consensus among 28 member states takes more time than I would like."

EU member states agreed a year ago that negotiations should start with Albania and North Macedonia in June this year, but Tusk added his voice to those warning this deadline would be missed.

"I want to be honest with you: not all member states are prepared to make the decision on opening negotiations in the coming days," Tusk said.

Albanian and Macedonian leaders have been shuttling through Brussels to push their cases ahead of a meeting of EU ministers in Luxembourg next week which in theory could give them the green light.

But with France, the Netherlands and Denmark opposed and the German government short of time to get the parliamentary approval it needs to back talks, Tirana and Skopje are set for disappointment.

Critics say enlarging the EU further risks importing problems, pointing to the corruption and justice issues in Romania and Bulgaria, but supporters argue that turning down new members risks driving them into the arms of outside powers such as China and Russia.

Highlighting the deep divisions, 13 members -- mostly former communist states in Eastern Europe, but also Italy and Austria -- on Tuesday published a joint call for the EU to open talks with Skopje and Tirana.

"The EU enlargement process has a positive transformative power in the Western Balkans and is an investment in peace and stability in Europe. It is essential to ensure the overall progress of the region," the statement said.

"The EU needs to fulfil its unambiguous commitment to the Western Balkans European integration. There is no 'plan B'."