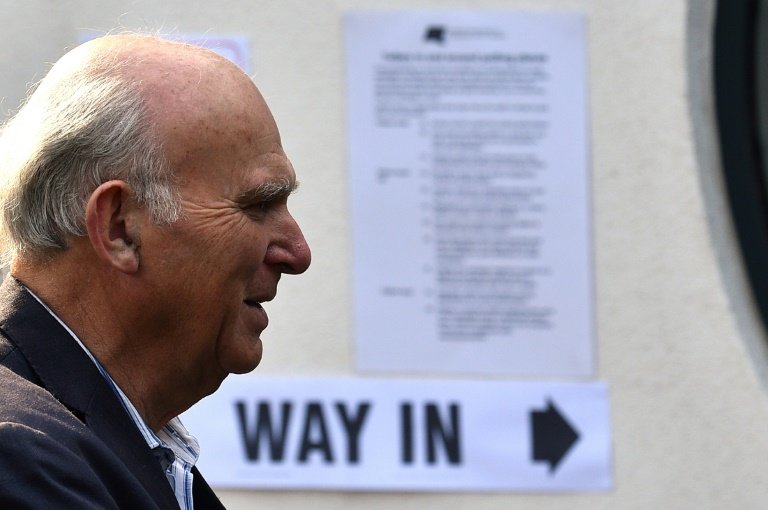 Strobe lights were dancing over the London nightclub when Liberal Democrats leader Vince Cable tapped the microphone and hushed the room with a call to keep Britain in the EU.

It was the grandfatherly figure's closing act in an unorthodox campaign that propelled his party of political outcasts to a top-two finish in European elections in which he embodied Britain's anti-Brexit voice.

The Liberal Democrats even came first in the Islington borough of London that the main opposition Labour Party leader Jeremy Corbyn represents in the UK parliament.

"We have shown ourselves to be the strongest 'Remain' force in British politics," a triumphant Cable declared after his party collected around 20 percent of the national vote.

"There is a clear lesson for Labour in tonight's results: get off the fence."

The venue for Cable's final campaign event reflected the cosmopolitan and socially liberal values of many UK voters who still embrace the European Union.

And they found unexpected solace in a balding 75-year-old whose party had been fairing so poorly that he promised to step down after the vote.

"What the Liberal Democrats have succeeded in doing is establishing themselves as the principal 'Remain' party," said University of Birmingham professor Matt Cole.

"But obviously it is also a reflection of their traditional role as a safe vote for disgruntled people who would normally vote Labour or Conservative," his Lancaster University colleague Mark Garnett added.

"They are receiving protest votes from people who dislike the way the two main parties are going."

Their success also comes at the expense of the newly-formed Change UK group of breakaways from the two main parties.

Change UK's refusal to form an anti-Brexit alliance with Cable backfired -- as did a series of media gaffes and internal disagreements that resulted in them looking at projections of just three percent.

British parties that back staying in the EU and demand a second referendum were set to get a combined 32.4 percent of Sunday's ballot.

That edged ahead of the 31.6 percent for populist Nigel Farage's Brexit Party and sufficient for Cable to claim a mandate for a second referendum aimed at undoing the one that pushed Britain out of Europe in 2016.

Cable had previously ruled out a new vote as "disrespectful" to Britons who voted to leave.

He now argues that it is justified because people know far more about Brexit's complexities and potential negative economic consequences.

But his critics are not fully convinced.

The Liberal Democrats have had a history of shifting alliances since being formed as a centre-left union of two moderate parties in 1988.

"The accusation of betraying their voters has not completely lost its impact," University of Birmingham's Cole said.

"They're not back where they were and that's partly to do with betrayal."

Cable's adoption of the "Bollocks to Brexit" slogan -- using what a BBC host crossly called "a profanity that we don't normally use in political discourse" -- defined his campaign's slightly irreverent tone.

The attitude helped secure a strong May 3 result in local elections that have been the traditional base of party support because of their relatively low cost.

But limited coffers might hurt the Liberal Democrats' chances in a snap general election that some think may be the only way of resolving the Brexit chaos.

Cable still hopes that Sunday's performance pushes the main opposition Labour Party to stop hedging its bets and demand a second referendum at its party conference in September.

"The key factor will be what the Labour Party does," Cole said.

"If the Labour Party fails to come up with a clear position on Europe, the Liberal Democrats will be the beneficiaries."