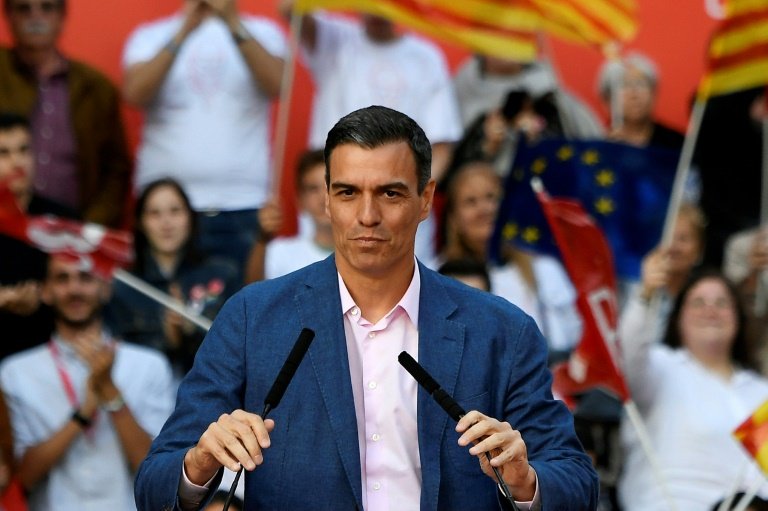 Favourite in the polls, Spain's ruling Socialists were hoping to emerge stronger from local, regional and European elections on Sunday seen as a "second round" of an April general poll.

Prime Minister Pedro Sanchez was the big winner of European elections in Spain on Sunday with his ruling Socialists coming first, a result he will likely use to wield more influence in the bloc.

With Spain the only major EU country where the Socialists topped the polls, Sanchez has emerged as the big hope for European social democrats.

"We are going to be the biggest social democrat delegation, and that's a source of pride for us, it's an opportunity, but also an enormous responsibility," a radiant Sanchez told reporters.

The Socialist Party (PSOE) also scored big in local and regional elections on Sunday, putting Sanchez in a stronger position as he seeks to form a new government following a general election on April 28.

Official results showed the Socialist Party came first with close to 33 percent of the vote in the elections to the European parliament, gaining 20 seats.

Trailing behind was the conservative Popular Party (PP), which won just over 20 percent.

Newly-emerged far-right party Vox, meanwhile, got just over six percent of the vote and will enter the European parliament with three seats.

But it has lost ground since the general election in which it won 10 percent, allowing it to burst into the national parliament for the first time.

The Socialists' win is a victory for Sanchez, not only domestically but further afield in the bloc where he is expected to use his win to push for outgoing Foreign Minister Josep Borrell to become the next EU foreign policy chief.

On the domestic front, the Socialists did well in local and regional elections.

They came first in 10 of the 12 regions that went to the polls.

That is a leap from the last regional elections in 2015 when they only won two of the regions, even if they lack the absolute majority in most areas and will have to form alliances to govern.

The results are likely to determine what Spain's new government looks like in what has been billed as the "second round" of the April general election in which the Socialists won but without a majority.

"The PSOE, after the results on April 28, has been confirmed as the biggest political force by far in Spain's political system," Sanchez said.

Going forward, Sanchez's preferred plan is to form a minority government with the support of other parties on a case-by-case basis when passing laws.

But while Sanchez wants to rule alone, Pablo Iglesias, the leader of far-left party Podemos, is pushing him to form a coalition.

But with Podemos having performed badly in the local and regional polls, Iglesias may not have enough weight to pressure Sanchez into accepting this.

In Barcelona, a Catalan separatist won municipal elections for the first time in Spain's modern history, even if outgoing left-wing mayor Ada Colau tailed him closely.

She won the municipal polls but without enough seats to form a majority with other left-wing parties, meaning the right is likely to take over the mayorship.