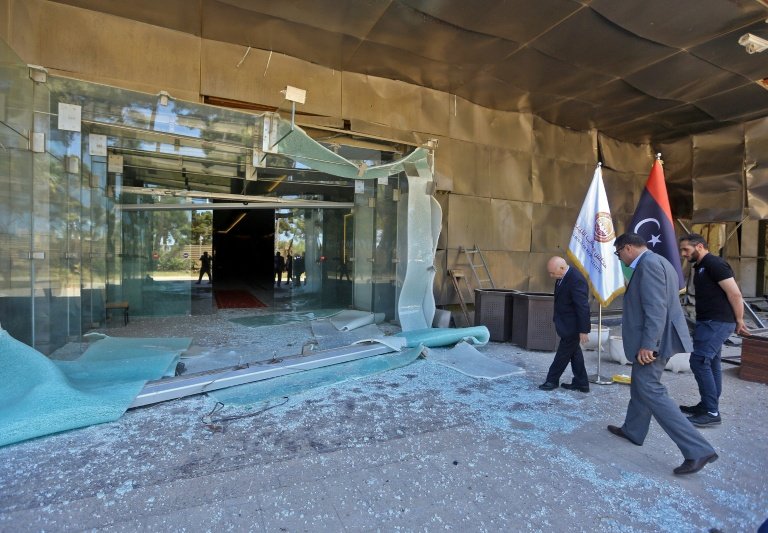 Sadeq al-Keheli (L), interim speaker for a faction of Libyan parliamentarians opposed to strongman Khalifa Haftar, inspects damage at a hotel serving as a HQ in Tripoli / © AFP

A hotel complex in the Libyan capital serving as a base for lawmakers opposed to strongman Khalifa Haftar was hit by rocket fire Friday, witnesses said.

The internationally recognised Government of National Accord (GNA) blamed the attack at the Rixos Hotel and Conference Centre on Haftar's self-styled Libyan National Army (LNA), which launched an offensive against Tripoli in early April.

The attack damaged the entrance to the conference centre adjoining the hotel, shattering its windows, AFP journalists at the scene said.

The minority faction of lawmakers, opposed to Haftar's offensive against Tripoli, installed itself in the capital in early May.

The 42-strong group held meetings at the Rixos, threatening a lasting schism with Libya's parliament based in Benghazi, in Haftar's eastern stronghold.

Sadeq al-Kehili, provisional speaker for the dissident lawmakers, described the attack as a "dangerous escalation" and accused Haftar's forces of a "war crime".

The GNA's interior ministry described the raid as "criminal" and said it was "a desperate attempt... resulting from the defeats" suffered by Haftar's forces.

Haftar advanced from his eastern stronghold into Libya's south early this year before turning his forces towards Tripoli, the seat of the GNA, on April 4.

But a counter-offensive by forces nominally loyal to the GNA has resulted in stalemate on the southern outskirts of the capital.

The fighting around Tripoli has killed at least 510 and wounded 2,467, while over 100,000 are trapped, according to the United Nations and NGOs.

Over 82,000 people have been displaced by the clashes since April 4, according to the UN's refugee agency UNHCR.

The Rixos is in the heart of the capital and had been the seat of a parliament elected in 2014 -- the first since former dictator Moamer Kadhafi was deposed and killed in a 2011 NATO-backed uprising.

But a seizure of the capital by militias forced the body to relocate to the east, in one of many episodes of violence that have engulfed Libya throughout most of the last decade.