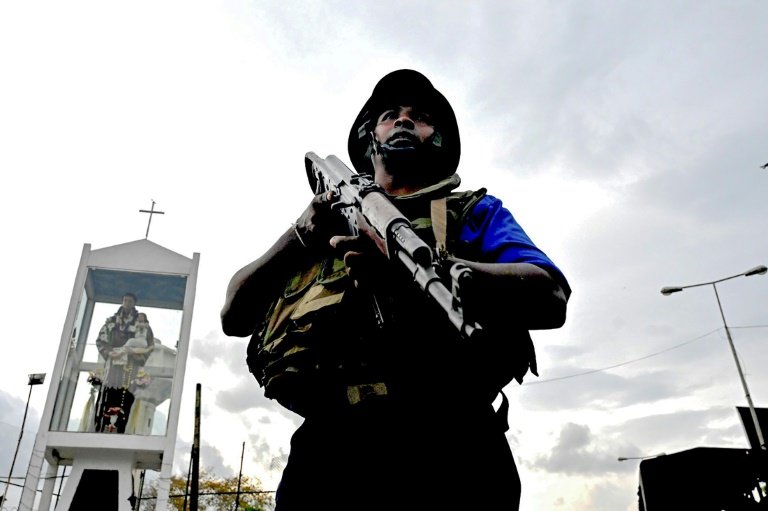 Sri Lanka began a day of national mourning Tuesday with three minutes of silence to honour more than 300 people killed in suicide bomb blasts that have been blamed on a local Islamist group.

Flags were lowered to half mast on government buildings, and people bowed their heads and reflected silently on the violence that has caused international outrage.

The silence began at 8:30 am (0300 GMT), the time that the first of six bombs detonated on Sunday morning, unleashing carnage at high-end hotels and churches packed with Easter worshippers.

Shortly after the silence was observed, a police spokesman said the toll had risen to 310, with several people dying of their injuries overnight.

The first memorial services for the victims, among them dozens of foreigners, were planned for Tuesday, hours after the government imposed a state of emergency and said an Islamist group was behind the violence.

At St Anthony's Shrine in Colombo -- where scores died as they gathered for Easter Sunday prayers -- a crowd of a few dozen people held candles and prayed silently, palms pressed together.

Some of them struggled to hold back tears and as the three minutes drew to a close, the crowd began to chant prayers. 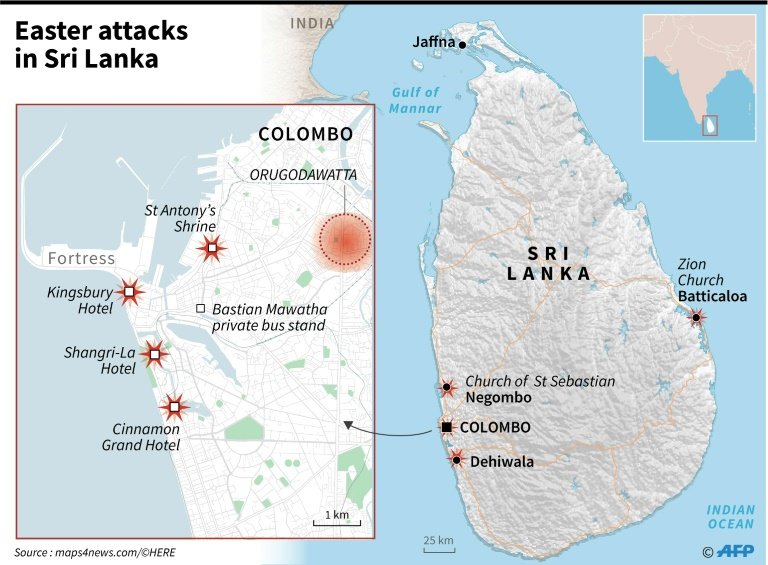 Maps of Sri Lanka and its capital Colombo, marking the locations of a series of suicide bombings on April 21, 2019 / © AFP

Police said that 40 people were now under arrest over the suicide bomb attacks -- the worst atrocity since Sri Lanka's civil war ended a decade ago.

The attacks were also the worst ever against the country's small Christian minority, who make up just seven percent of its population of 21 million.

The spokesman added that it was not possible for such "a small organisation" to carry out such well coordinated suicide strikes.

President Maithripala Sirisena's office said there was intelligence that "international terror groups" were "behind local terrorists" and that he would seek foreign help to investigate. 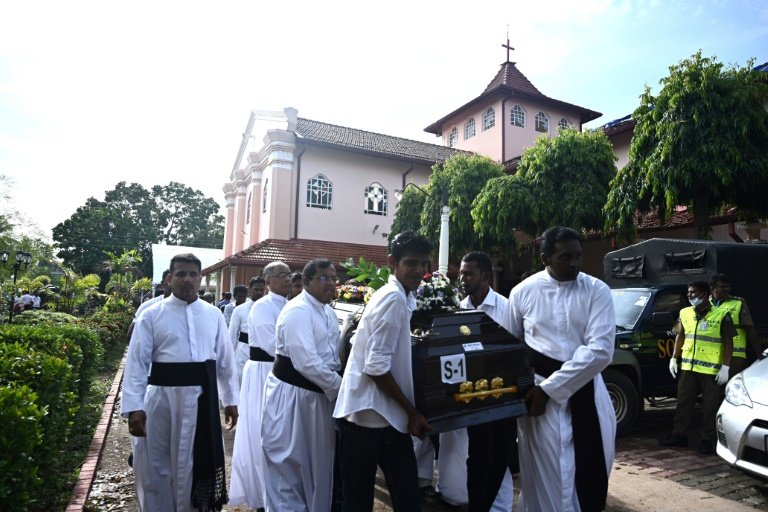 The state of emergency, which gave police and the military special powers to counter militant strikes, came into force at midnight (1830 GMT Monday). Suspects can be detained without a court order.

A second straight night-time curfew was also put in place, but lifted before dawn.

Officials are also investigating why more precautions were not taken after an April 11 warning from Sri Lanka's police that a "foreign intelligence agency" had reported the NTJ planned suicide attacks on churches.

Senaratne said the warning was not passed on to Prime Minister Ranil Wickremesinghe or other top ministers.

Tensions remained high and security heavy after a bomb discovered by police on Monday near one of the targeted churches blew up before police could defuse it. Although there was a powerful blast, no injuries were reported. 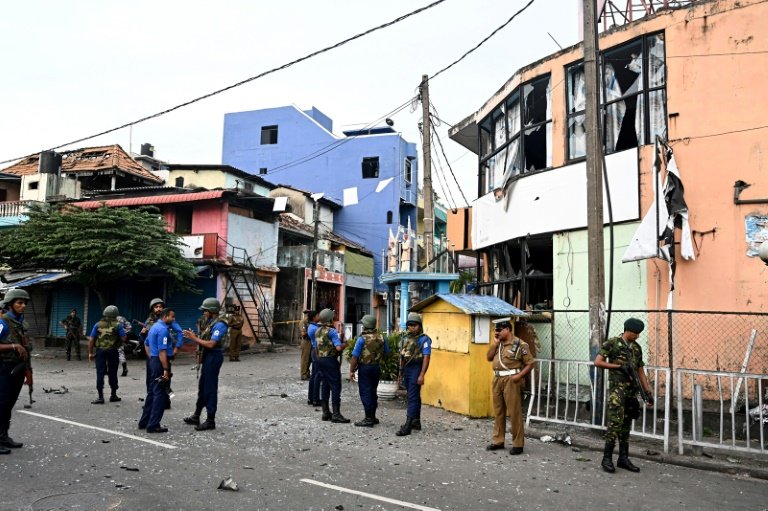 Details have begun to emerge about some of the foreigners killed in the blasts.

The United States reported at least four Americans killed -- including a child -- and the Netherlands raised their toll to three.

A Danish billionaire lost three of his children in the attacks, a spokesman for his company said. 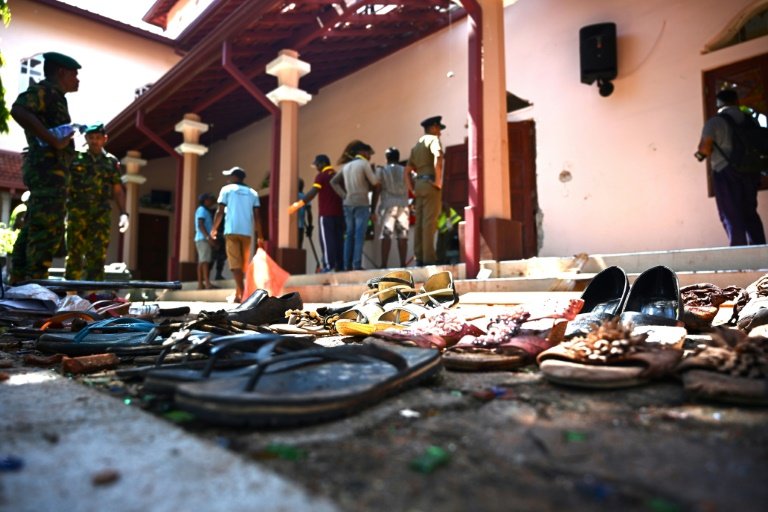 The churches targeted included St Sebastian's in Negombo, north of the capital / © AFP

The suicide bombers hit three Colombo luxury hotels popular with foreign tourists -- the Cinnamon Grand, the Shangri-La and the Kingsbury -- and three churches: two in the Colombo region and one in the eastern city of Batticaloa.

Interpol said it was deploying investigators and specialists to Sri Lanka, and the US State Department warned of possible further attacks in a travel advisory.

Ethnic and religious violence has plagued Sri Lanka for decades, with a 37-year conflict with Tamil rebels followed by an upswing in recent years in clashes between the Buddhist majority and Muslims. 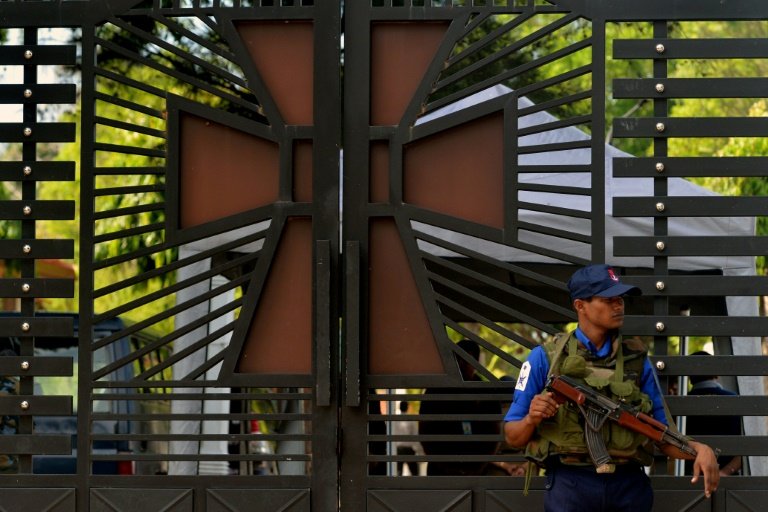 The attacks were also the worst ever against the country's small Christian minority, who make up just seven percent of its population of 21 million / © AFP

Burials were expected to begin for some of the dead on Tuesday.

At St Sebastian's, coffins were being brought in individually for services in the run-up to a mass memorial beginning mid-morning.

"There are so many bodies that we can't accommodate them all at once," Anthony Jayakody, auxillary bishop of Colombo, told AFP.

The attacks have sparked local and international outrage.

Two leading Sri Lankan Muslim groups issued statements condemning the attacks, with the All Ceylon Jamiyaathuul Ulama, a council of Muslim theologians, urging the "maximum punishment for everyone involved in these dastardly acts".