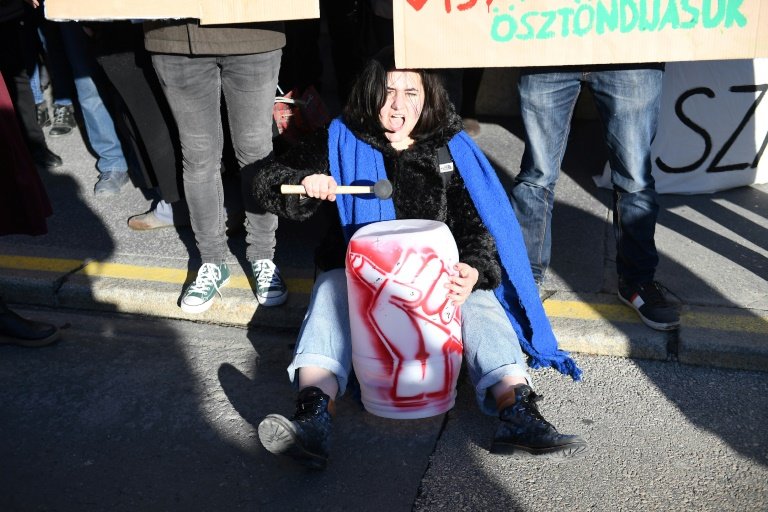 The government, which has accused the body of "engaging in politics," has already slashed some of the Hungarian Academy of Sciences' funding / © AFP

Thousands of Hungarians rallied in Budapest on Tuesday outside a prestigious scientific institution that says it is the victim of a new power grab by Prime Minister Viktor Orban's government.

Founded in 1825, the Hungarian Academy of Sciences (MTA) is the country's oldest and largest scientific institution but the government views it as an inefficient relic of communism.

Soon after Orban won a third consecutive term last April, a new innovation ministry was created which announced it would divert control of funding away from the MTA and its institutes in favour of new "innovation-driven" projects.

Orban has rejected researchers' criticisms of the reforms, saying Hungary needs to improve its place "among the weaker performers in international innovation rankings" and that the government needed to ensure that "economic profit could also be gained from science".

The reforms have alarmed Hungary's scientific community, which fears that the MTA is under attack because it has criticised government policies, and that thousands of researchers' jobs are now at risk.

The MTA's institutes, which employ some 5,000 staff nationwide including around 3,000 researchers, perform a vast range of research ranging from philosophy to music, animal husbandry to space research.

Around 2,000 protestors held books aloft to represent Hungarian science and formed a human chain around the MTA building to symbolically urge its board to resist the government's proposals.

"This is an attack on science, the government wants to reward loyalists with funding, rather than support research," agricultural science researcher Emese Gutai, 44, told AFP.

Some of the MTA's funding has already been slashed with laboratories temporarily closing as a result.

The government has accused the MTA of "engaging in politics", an echo of its long-running feud with the Central European University (CEU), founded by Orban's bete noire, liberal US-Hungarian billionaire George Soros.

In December the CEU announced it was moving most of its programmes out of Budapest to Vienna after it said it was targeted by government legislation steamrolled through parliament in 2017.

In a statement on Monday the CEU, located a block away from the MTA, criticised the government's plans as "politically motivated" and aimed at "undermining the independence" of the MTA.

Orban's critics say that since coming to power in 2010 he has gradually weakened the independence of several key institutions in Hungary, including public media and the judiciary.