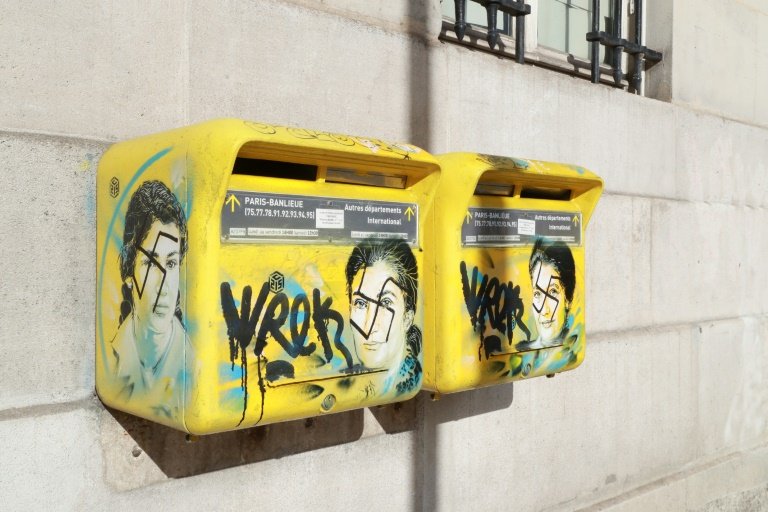 In one case, anti-Semitic graffiti and swastikas were scrawled on a Paris post box bearing a portrait of the late minister and Holocaust survivor Simone Veil / © AFP

A spate of anti-Semitic vandalism and graffiti in and around Paris at the weekend sparked widespread condemnation on Tuesday, stoking fresh concerns about an increase in hate crime against Jews.

Prime Minister Edouard Philippe told lawmakers that he shared their anger at the "loathsome" acts, urging people "to express their absolute rejection" of anti-Semitism.

"That is not enough, of course, but the day when we no longer do so, when fatigue wins the day, then all will be lost," he said.

Government spokesman Benjamin Griveaux suggested the vandalism could be blamed in part on the far-left and far-right activists who have infiltrated the weekly "yellow vest" protests.

Demonstrators have gathered in Paris every Saturday since mid-November to denounce the government of President Emmanuel Macron, often leading to violent skirmishes with police.

"We're not talking about the protesters who are struggling to make ends meet," Griveaux told France 2 television.

"But those who are committing violent acts, openly anti-Semitic or racist acts, they must be charged and severely punished."

The rise in anti-Semitic acts in France, however, predates the yellow vest movement and there was no evidence linking the latest incidents to the protests.

Interior Minister Christophe Castaner had on Monday said anti-Semitism was "spreading like poison" as he visited a memorial site outside Paris for Ilan Halimi, a young Jewish man who was tortured to death in 2006.

There, a tree planted at the site where 23-year-old's body was found had been chopped down, and a second tree was partly sawed through.

Also in recent days, the word "Juden" (German for Jew) was scrawled on the window of a Paris bagel bakery and swastikas were plastered over several post boxes bearing the image of former government minister and Holocaust survivor Simone Veil.

Other graffiti found on Monday at the headquarters of French daily Le Monde targeted President Emmanuel Macron, using anti-Semitic tropes to refer to his former job as a Rothschild investment banker.

In another incident, the words "Macron Jews' Bitch" was written in English across a garage door in the city centre, and the phrase "Jewish pig" was sprayed onto a wall in the northern 18th district.

"The social crisis France has seen since the emergence of the yellow vests has only encouraged such acts," an editorial in Le Monde newspaper said on Tuesday.

"To imagine that this old, hideous hate will abate once the social tensions ease is just wishful thinking." Castaner had on Monday said the number of anti-Jewish offences reported to the police surged 74 percent last year, to 541 up from 311 in 2017, after two years of declines.

Of that figure, 183 involved assaults and at least one murder -- that of an 85-year-old Holocaust survivor who was killed in a savage attack at her home last March, believed to be motivated at least partly by anti-Semitism.

The other 358 offences involved anti-Semitic threats or insults.

The increase came as other racist and xenophobic acts fell 4.2 percent, and just 100 anti-Muslim cases were reported, the lowest number since 2010.

"Conspiracy theorists are very present among their ranks," he said, before referring to a survey released on Monday.

The number of anti-Jewish offences reported to the police surged 74 percent last year. In December, headstones were defaced at a Jewish cemetery in Herrlisheim, eastern France / © AFP/File

The Ifop poll said nearly half the yellow vests believed in a worldwide "Zionist plot" as well as the "Great Replacement" theory, which suggests immigration is being deliberately organised "to replace Europe's native populations".

France is home to the largest Jewish population in Europe and the community has been targeted by jihadists in recent years.

In 2011, an Islamist gunman shot dead a rabbi and three children at a Jewish school in Toulouse and in 2015 an extremist claiming allegiance to the Islamic State group killed four people at a kosher supermarket in Paris.

Writing on Twitter on Tuesday, far-right leader Marine Le Pen denounced "a surge in anti-Semitic acts and the desecration of Christian places of worship".