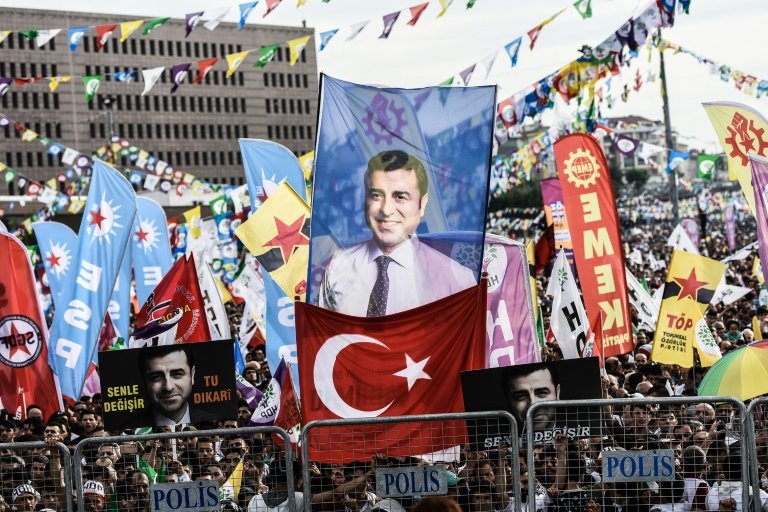 Jailed top Kurdish politician Selahattin Demirtas said he was a "political hostage" on Wednesday during his first court appearance in Turkey since a European rights court demanded his release.

The European Court of Human Rights (ECHR) last month slammed the pre-trial detention of Demirtas, who is considered a potential rival to Turkish President Recep Tayyip Erdogan, as politically motivated.

Demirtas, a former co-leader of the Peoples' Democratic Party (HDP), has been detained since 2016 pending his trial on multiple charges that include managing a "terrorist organisation".

He remains an influential figure in the Kurdish movement.

At the court hearing on Wednesday the 45-year-old condemned his "political trial", according to comments published by his lawyers on Twitter.

"Even at the age of 90, if I only have one tooth left, I will not ask you for my release. Because you did not put me in detention and it is not you who can release me," he told the court.

Erdogan, who has rejected the ECHR ruling, regularly accuses the HDP of being a political front for the outlawed Kurdistan Workers' Party (PKK), which has waged an insurgency against the Turkish state since 1984.

The left-wing HDP is the third largest party in parliament and has campaigned for women, worker and gay rights.

Last week a Turkish court rejected an appeal by Demirtas against his conviction for "terrorist propaganda", for which he was sentenced in September to four years and eight months in prison.

German politician Hakan Tas said the sentence means Demirtas has little chance of being released before March local elections, even if Turkey chooses to comply with the ECHR ruling.

"This is a position that completely goes against international law," said the Turkish-born Die Linke MP, who travelled to attend the trial but was refused access to the hearing.

Demirtas faces multiple criminal proceedings and could be jailed for 142 years if he is found guilty on all charges.

The trial at the court in a prison complex Sincan on the outskirts of the capital Ankara was scheduled to continue on Thursday and Friday.