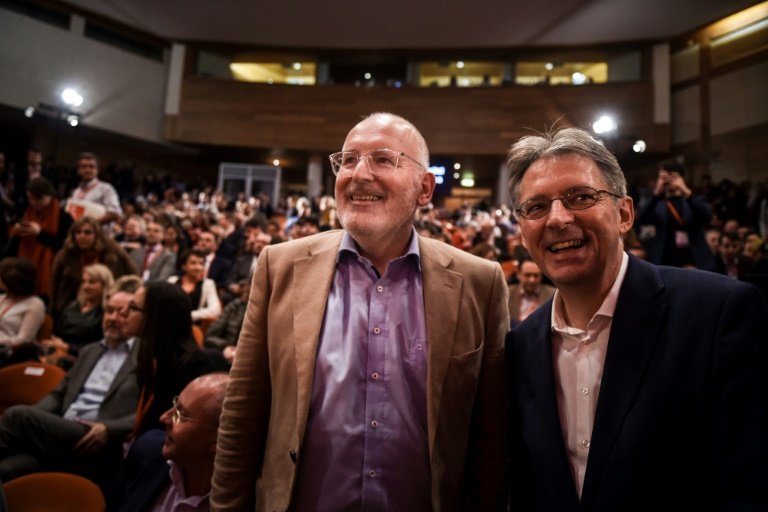 Frans Timmermans, (C) a former Dutch foreign minister, has most notably been the European commission's pointman in its confrontation with the right-wing Polish government / © AFP

Europe's socialist parties on Saturday chose Dutch politician Frans Timmermans to lead them in May elections and to succeed his boss Jean-Claude Juncker as head of the European Commission.

Delegates voted in Timmermans, currently first vice president of the EU's powerful executive arm, as the common candidate at the 11th congress for Europe's alliance of socialist parties in Lisbon.

The former Dutch foreign minister, 57, has most notably been the commission's pointman in its confrontation with the right-wing Polish government over the rule of law.

"I am aware of the burden on my shoulders, but how can I fail with a family like this behind me," Timmermans said during the congress attended by the socialist leaders of Spain, Portugal and Malta.

Spanish Prime Minister Pedro Sanchez said it was an "honour" to have the socialist political family represented by Timmermans as "a man who defends all freedoms".

The Dutchman stepped into the running after the withdrawal of Slovak diplomat Maros Sefcovic at the start of November.

Juncker - the former Luxembourg premier who has been dogged by health concerns -- is due to step down in mid-2019.

Timmermans has the tough task of leading Europe's socialist alliance into the May 19 European Parliament election when traditional parties face a major challenge from far-right and eurosceptic populists.

The Party of European Socialists alliance is the second bloc in the European parliament in Strasbourg behind the right-wing European People's Party (EPP).

The latest polls show socialists winning 140 seats against 183 seats for the EPP in the May ballot for the 751-seat European legislature.