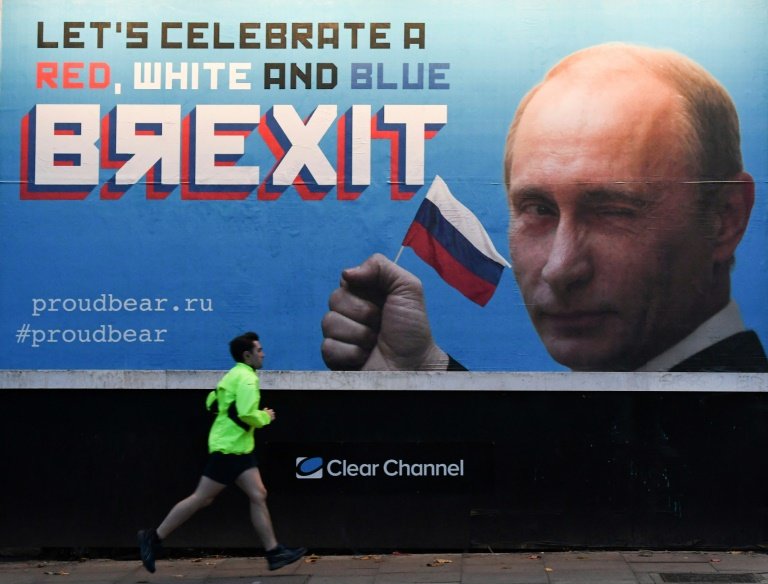 Spoof billboards appeared in the British capital on Thursday purportedly organised by Russian military intelligence officers "to celebrate their role" in the 2016 Brexit referendum -- to the bemusement of Londoners.

The posters, an attempt at geo-political satire erected at several spots in east London, are supposedly the work of Russia's GRU military intelligence unit, according to a light-hearted press release from organisers.

One billboard reads "let's celebrate a red, white and blue Brexit" -- with the "r" in Brexit reversed to appear Cyrillic -- alongside a picture of Russian President Vladimir Putin winking and clasping the Russian flag.

Another screams "thank you! Boris" next to a well-known photo of Boris Johnson, Britain's former foreign secretary and leading Brexiteer, suspended from a zipwire.

He is also holding Russian flags in his hands in the poster.

Britain has blamed the agency for orchestrating the poisoning of ex-Russian spy Sergei Skripal and his daughter Yulia in the English city of Salisbury in March.

Meanwhile the "Proud Bear" name appears to be a mocking reference to the Russian hacking groups Fancy Bear and Cozy Bear, accused of cyber-attacks on the US Democratic Party in the run-up to the 2016 presidential election.

The billboard organisers added mockingly they aim to highlight the GRU's "part in Britain's imminent liberation from the EU". 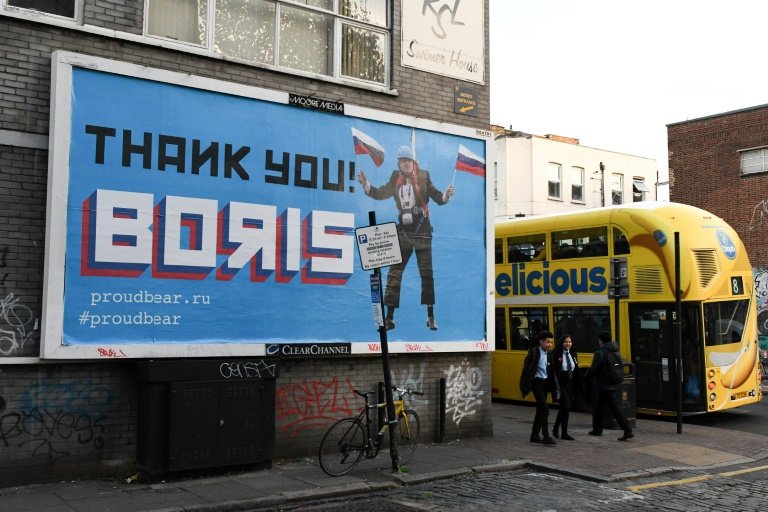 Although the British government has said it found no evidence of foreign interference in the Brexit vote, some critics have accused Moscow of playing an underhand role.

Bemused Londoners passing the posters on Thursday seemed unsure what to make of them.

"I have no idea what this is -- I took a photo to Google it," said 49-year-old Roasana Claussen as she stared up at Putin.

Church worker Hassan Jama, 30, was similarly perplexed in front of the Johnson billboard.

"I don't have a clue. This is my first time seeing it," he said.

But the joke wasn't lost on everyone.

"I find that very funny," chuckled 32-year-old Olly Hawes. "It's thought provoking in some ways."

Noting their placement in east London, which heavily backed Britain remaining in the EU in the 2016 referendum, he added: "I guess it's preaching to the converted, and perhaps a jab in the ribs rather than an attempt to achieve anything."

They pledged the 40-metre long advert will feature "a topless Vladimir Putin riding Big Ben like a horse, alongside the words "taking back control" -- a key Brexiteers slogan.