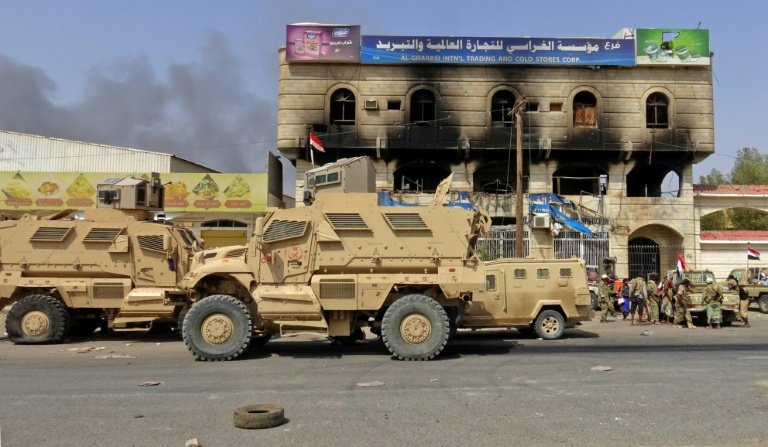 Yemeni pro-government forces gather on the eastern outskirts of Hodeida, as they continue to battle for control of the city from Huthi rebels on November 8, 2018 / © AFP

After a week of intense battles with the Iran-backed Huthi insurgents on the outskirts of Hodeida, loyalist troops reached residential neighbourhoods, using bulldozers to remove concrete road blocks installed by the rebels.

Three military sources said that government forces and their coalition allies were edging towards the city's vital port through which nearly 80 percent of Yemen's commercial imports and practically all UN-supervised humanitarian aid pass. 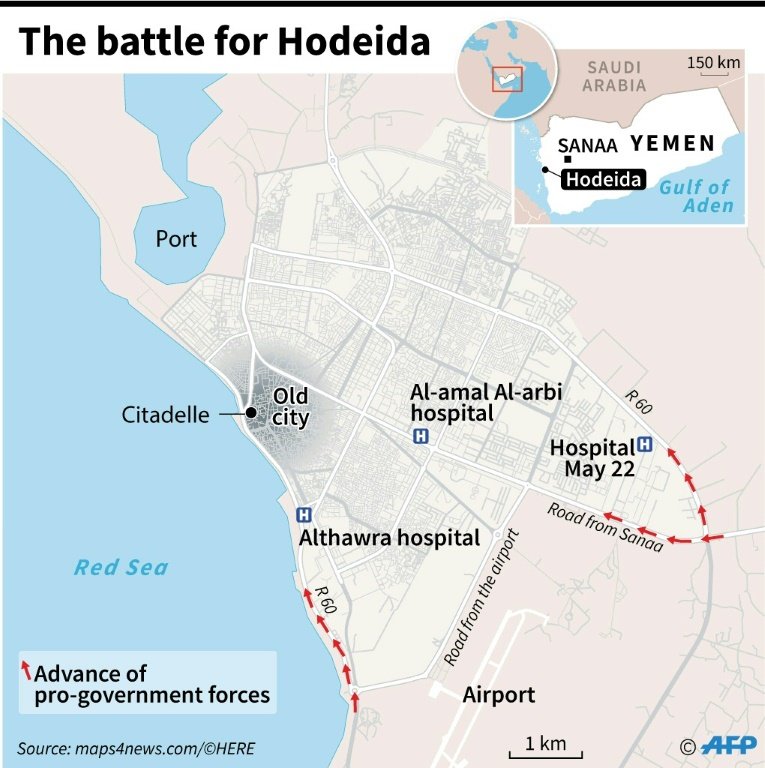 The battle for Hodeida / © AFP

"Either the rebels surrender the city peacefully or we take it by force, but we will take it either way," commander Moammar al-Saidy told AFP.

Medics at hospitals in government-held territory said 11 soldiers were killed.

The deaths bring the overall toll from seven days of fighting to 250 combatants killed -- 197 rebels and 53 loyalists.

Aid group Save the Children confirmed the death of one civilian, a 15-year-old boy who died of shrapnel wounds sustained just outside the city. 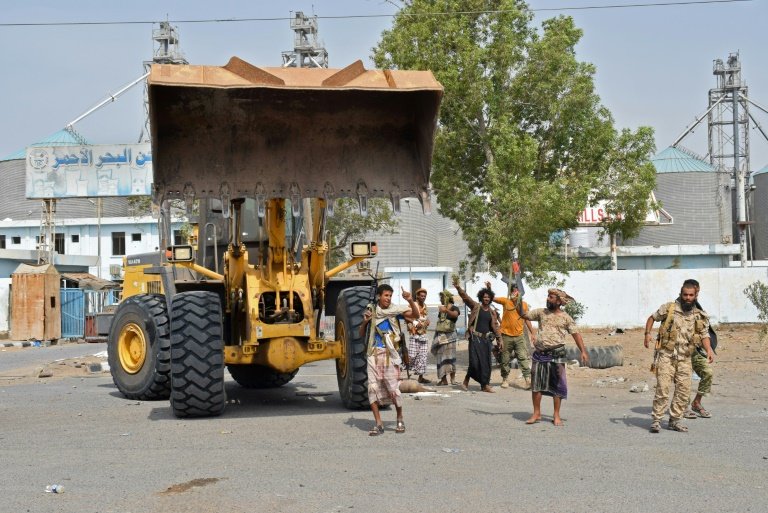 The Huthis have controlled Hodeida since 2014 when they overran the capital Sanaa and then swept though much of the rest of the country, triggering Saudi-led military intervention the following year and a devastating war of attrition.

The rebels have since been driven out of virtually all of the south and much of the Red Sea coast.

Their advance into the city of some 600,000 people has been slowed by trenches and minefields dug by the rebels around their last major coastal stronghold, an army source said.

"We will clean the streets of the city... of Huthi militias and we will continue to advance beyond Hodeida," said fighter Fadel Abbas.

But rebel chief Abdulmalik al-Huthi vowed late on Wednesday that his fighters would never surrender despite being seriously outnumbered. 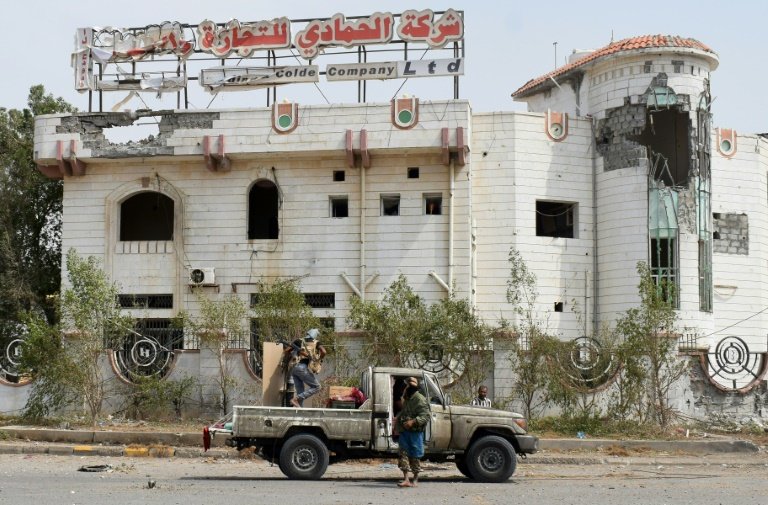 "This is not happening and will not happen ever," he said.

And the rebels said Thursday evening that they had "cut the supply routes" for pro-government forces in four parts of Hodeida province outside the city.

While some shops had shuttered their windows, a vegetable market was bustling as armed men could be seen patrolling the area.

Pedestrians and cars poured into Jizan Road, a main street in the city's north.

Human rights groups have voiced fears that a protracted battle for the city will exact heavy civilian casualties and force a halt to vital food shipments.

UN agencies say some 14 million people are at risk of famine in Yemen, which they have described as the world's worst humanitarian crisis.

Aid groups have appealed to both the rebels and the coalition to provide safe passage for fleeing civilians and halt fighting around hospitals.

On Thursday, Amnesty International accused the rebels of "deliberate militarisation" of one of Hodeida's main hospitals, saying they had placed snipers on the roof of the facility in the May 22 district.

At another of the city's major hospitals, Al-Thawra, just metres from the front line, a 10-year-old boy died of malnutrition Thursday, the UN children's agency UNICEF reported. 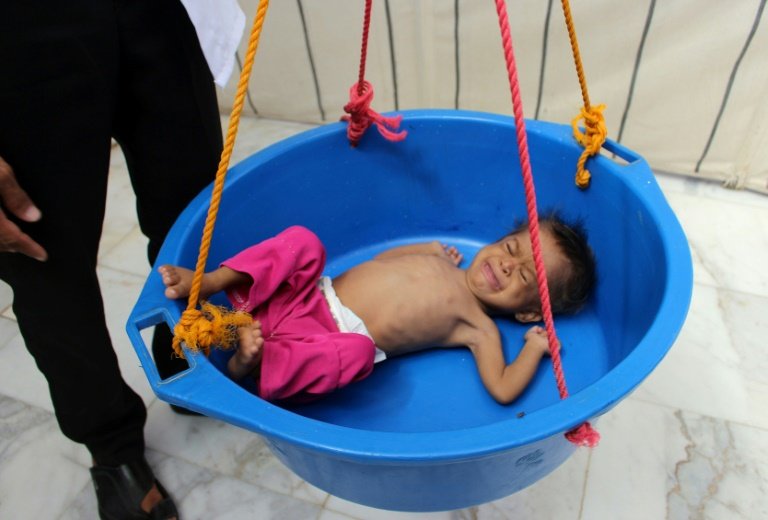 A Yemeni child suffering from severe malnutrition is weighed at a treatment centre in Yemen's northwestern Hajjah province, on November 7, 2018 / © AFP

"We're running out of words to describe how wretched the situation is," said Fabrizio Carboni, International Committee of the Red Cross Middle East director, in a statement.

Multiple UN-sponsored efforts to broker a power-sharing agreement between the government and the rebels have failed.

A UN push to convene peace talks in Switzerland collapsed in September as the rebels stayed away, saying they had not received sufficient guarantees for their safe passage.

UN special envoy Martin Griffiths on Wednesday said he aimed to hold peace talks by the end of the year.