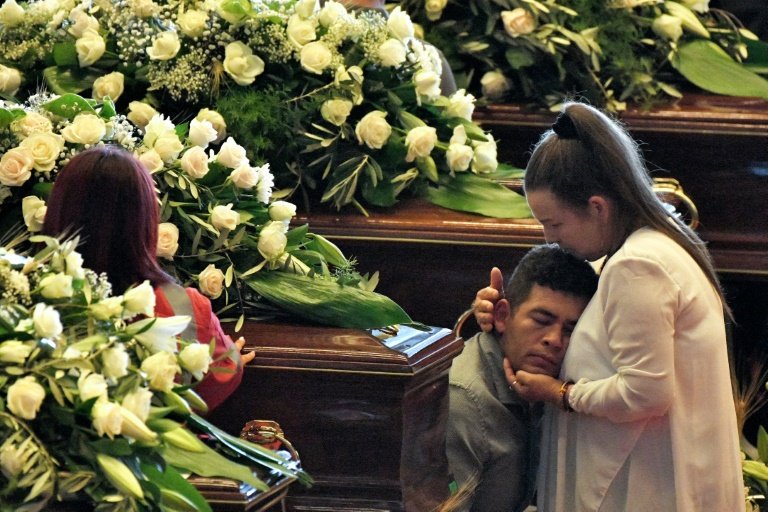 Italy is searching for answers on Sunday after paying its respects to the dozens killed by a collapsed bridge in Genoa, as the country's new government continues to battle the underfire motorway company that manages.

The death toll from the disaster rose to 43 on Sunday after firefighters discovered three bodies, reported to be those of a couple and their nine-year-old daughter, overnight inside a car extracted from the rubble of the viaduct. 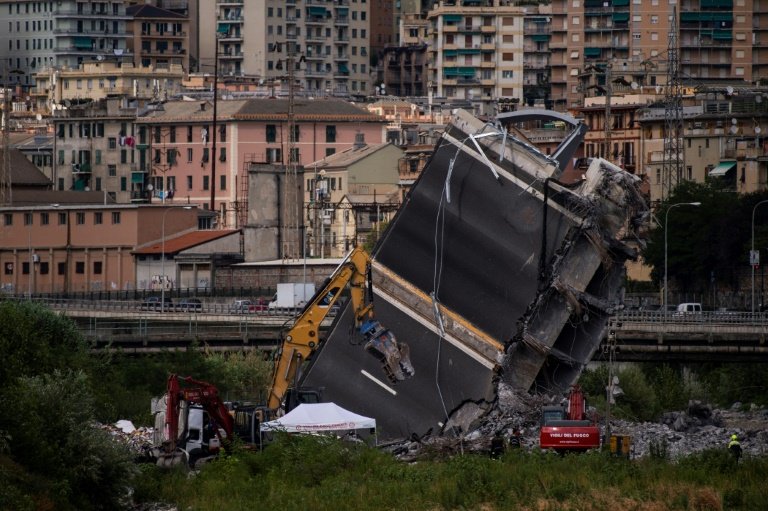 "The fire service is continuing its inspection of the area in order to rule out the eventual presence of people not reported missing."

The findings mean that all those reported missing after Tuesday's tragedy have now been accounted for, although rescuers are continuing to comb the wreckage. Two of the nine injured still in hospital are in a serious condition.

The announcement followed the discovery Saturday of the body of a labourer in his 30s in the rubble and the death of another man in hospital.

The disaster has caused public outrage and unleashed a fierce debate over the state of Italy's infrastructure.

Rome has blamed the collapse on Autostrade per l'Italia, which manages almost half of the country's motorway network including the stricken A10 road that included the bridge. 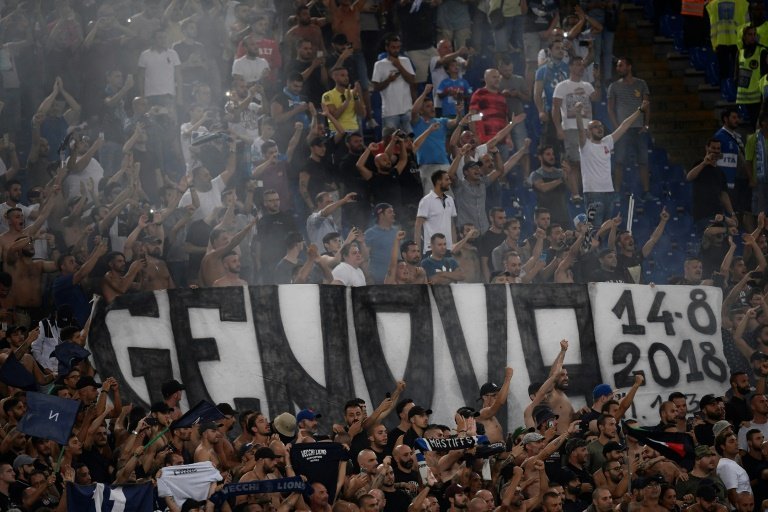 But Giovanni Toti, president of the Liguria region where Genoa is located, asked that the government concentrate on drafting an "emergency law" for Genoa "that will allow us to work in a speedy fashion" rather than the battle with Autostrade.

The prosecutor investigating the bridge collapse has criticised past management of Italy's infrastructure.

Francesco Cozzi said the state had "abdicated" its responsibility to ensure road safety by handing motorway management to the private sector, in an interview published Sunday.

"The philosophy of our system today sees a state stripped of its powers, a sort of absent owner," he told the Corriere Della Sera newspaper.

Meanwhile, Toti said that the hundreds evacuated from homes near or even under what remains of the bridge would be given new housing "within eight weeks".

"We are working day and night to find comfortable accommodation for everyone," he wrote on Twitter on Sunday.

"Work will begin this week. Within eight weeks maximum there will be a home for everyone. No-one should be left behind." 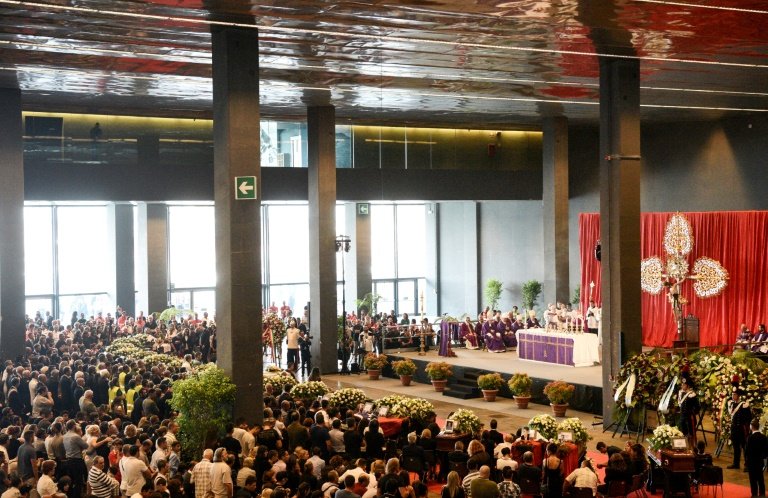 Italy bid farewell to the victims, including several children, in Saturday's solemn funeral that was boycotted by a majority of the families, who resented the presence of politicians and derided the ceremony as "a farce".

Thousands of mourners packed into a flower-filled makeshift chapel where the coffins of 19 victims had been lined up.

An imam led prayers for two Muslim victims -- a poignant gesture in a staunchly Catholic country where the far-right is now in power and which has seen a rise in attacks on foreigners.

Shortly after the official ceremony, Autostrade announced it would make 500 million euros ($570 million) available to help those affected by the tragedy and rebuild the partially collapsed bridge.

The Morandi viaduct dates from the 1960s and has been riddled with structural problems for decades, leading to expensive maintenance and criticism from engineering experts. 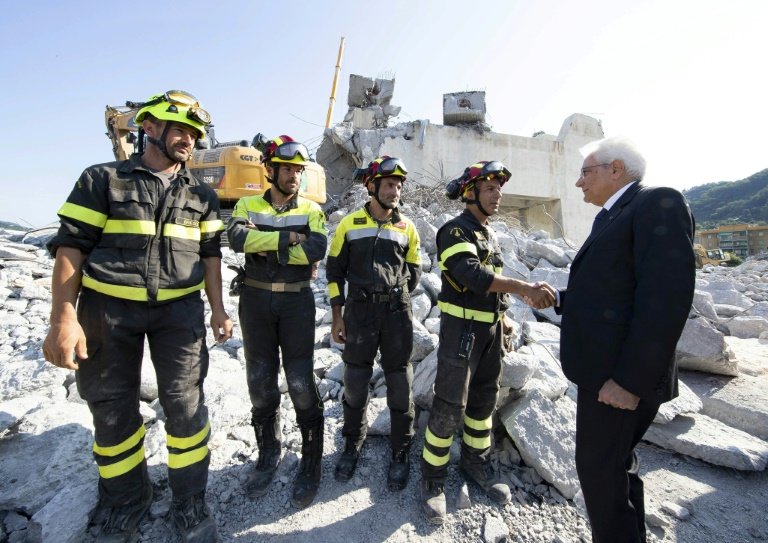 The company's boss Giovanni Castellucci said it would take eight months to build a new steel bridge in place of what was left of the viaduct.

The government plans to strip Autostrade of all of its lucrative contracts, which total 3,020 kilometres (1,870 miles) of Italy's 7,000 km-long motorway network.

Di Maio said "the state won't accept Autostrade's handouts" and demanded "credible compensation", while Salvini called the sum, which he asked for on Thursday, "the bare minimum".

"If they think that they have paid for their mistakes then they are mistaken," said Salvini on Saturday. 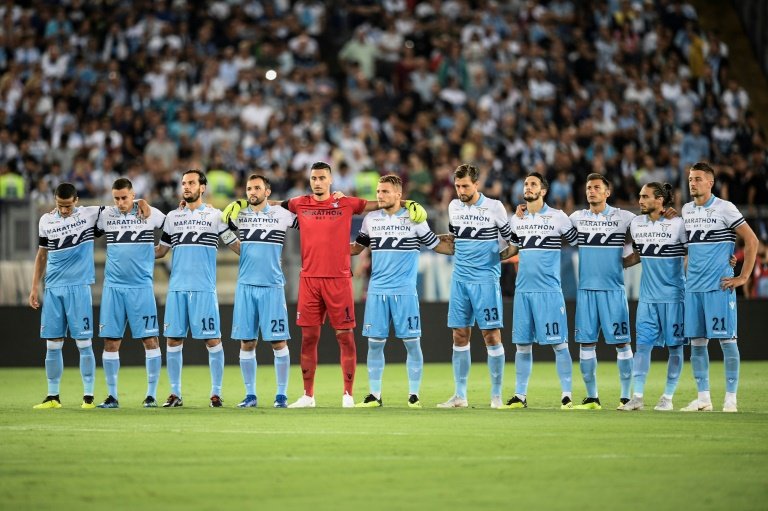 However, Toti said in an interview with state broadcaster RAI that he considered positive "everything that could help Genoa and Liguria to get going again".

"Culpability and concessions are discussions that take place in the courts, outside the region's remit."

The government announced Saturday it would provide 28.5 million euros for the emergency.

The tragedy has shaken the whole country. Key landmarks like Rome's Colosseum switched off their lights in a sign of respect, while Italy's top-flight football teams are holding a minute's silence ahead of their opening games of the new Serie A season starting this weekend.