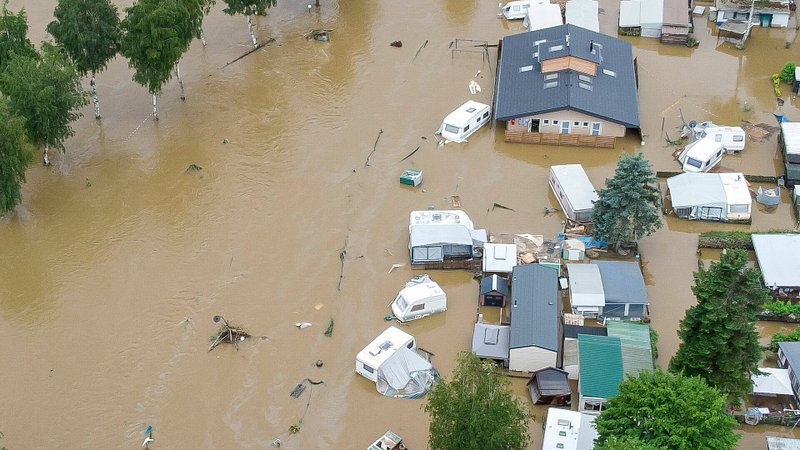 What causes heavy rain and flooding? Can these events be predicted, and where is more research required? Laurent Pfister, a hydrologist at the Luxembourg Institute of Science and Technology, shares his thoughts.

This interview was conducted by Jean-Paul Bertemes (FNR).

Luxembourg has been repeatedly hit by heavy rain events in recent years. How do you classify the current weather conditions?

The heavy rains of 2016, 2018, and earlier this year, led to so-called flash floods. This occurs when a large amount of rain falls within a very small timeframe, saturating the top few centimetres of the ground surfaces. This prevents the soil from absorbing the rest of the rain, which then causes flooding. This can even occur after a dry spell, after which the soil should still absorb water. But with large amounts of rainfall in a short space of time, there is not sufficient time for the water to reach to reach the deeper layers of soil.

The floods of the last few days have been different. Rather than a local phenomenon, they have affected a large region, spread across several countries. For the last few weeks, the weather has been rainy and inconsistent, leading to total soil saturation following heavy rain. The rainfall can neither seep away or be absorbed into the soil.

An example: if you were to quickly pour a large amount of water into a flowerpot filled with soil, the pot would fill up and overflow even though part of the water would be absorbed by the soil. It is a similar process with flash floods.

If, however, you were to add water slowly to the pot, it would not overflow immediately; instead, it would saturate the soil. Then, when you continue to add water over a longer period of time, it would cease to absorb and overflow. This is comparable to the current situation across Luxembourg and the surrounding area.

How difficult is it to predict these events?

It is very difficult to predict flash floods, mainly because they occur at a local level and happen extremely quickly. This is why there is a need for further research.

However, the current weather events were relatively easy to predict. Normally, large-scale floods in the Luxembourg region are caused by humid air masses flowing from the North Atlantic in the winter months. This was not the case for the floods this week. Warm, humid air masses from the Mediterranean area collided with cooler air masses from the Atlantic in the region where the floods occurred. This strong contrast led to heavy rainfall and subsequent floods.

The Water Management Authority created a map of heavy rain zones to improve prevention. More information on this atlas can be found here:

Heavy rain and floods: where does the water come from and where does it flow to?

In the public debate, a number of reasons for these phenomena are often cited, such as sealing of surfaces, climate change, agriculture... Let's look at these one by one. What role does the sealing of surfaces play when it comes to floods?

Sealed surfaces do play a major role in flash floods. If a lot of rain falls locally within a very short period of time, sealed areas will immediately flood. In the case of unsealed surfaces, the ground can absorb some of the rainfall. However, as soon as soil surfaces are saturated, it is irrelevant whether a surface is sealed.

For the current floods, sealing plays less of a role as the soil is saturated and the water can no longer run off in the affected areas.

However, it is not a black and white issue; these are complex phenomena. The amount of rainfall, evaporation strength, the nature of the soil, its absorbency, its gradient, the level of erosion, and so on. All of these play significant roles.

But to answer the original question again briefly and succinctly: Sealed areas do have an impact on flood events, but are not systematically their origin.

What about climate change?

Such weather phenomena existed before climate change. But one thing is clear: the higher the global temperatures, the more water the atmosphere can store and transport over long distances. This means that heavy rainfall becomes much more likely.

I would recommend discussing this aspect with our expert Nuria Martinez-Carreras.

Earlier you said it was difficult to predict flash floods - why is that?

The Water Management Authority has access to data from a variety of measurement stations that are spread across the country, so they can easily spot heavy rainfall over a large area. If the weather forecasts are also relatively clear, they can assess the situation well in advance and issue warnings if necessary.

The situation is more complicated with flash floods. These are short-term, spatially very limited phenomena, so it may be that there are no sensors in the affected area. In addition, when something like this happens, a lot depends on what the local circumstances are like: is the area densely populated? Is there a slope there, a stream? What is the soil like? And so on.

Are there research efforts to improve this?

Yes. In fact, we recently worked on a project together with the water management office and the post office, with the support of the FNR.

More details about this project here:

Heavy rain and floods: How can the dimensions be estimated in advance?

Although it is still too early to draw conclusions, we have some interesting prospective avenues. For example, in the future - if there is any indication of a heavy rain event in a certain region - more mobile sensors could be placed there in order to gain a better overview of the situation. But this will require logistical planning.

There is also the potential to use mobile phone antennae to locate rain, as rain can easily disturb the signal from mobile phone antennae. This could be included in our models and in our early warning systems to get information about the location and quantity of rainfall.

In general, we use heavy rain events to continuously improve our models, which then show whether our parameters are good or where they can be improved. Overall, we learn something new every time.

Are there any significant findings now, given recent events?

It is too early to say. We should have more data over the next few days which we can subject to analysis. In a few weeks we would then expect to draw a more robust conclusion.