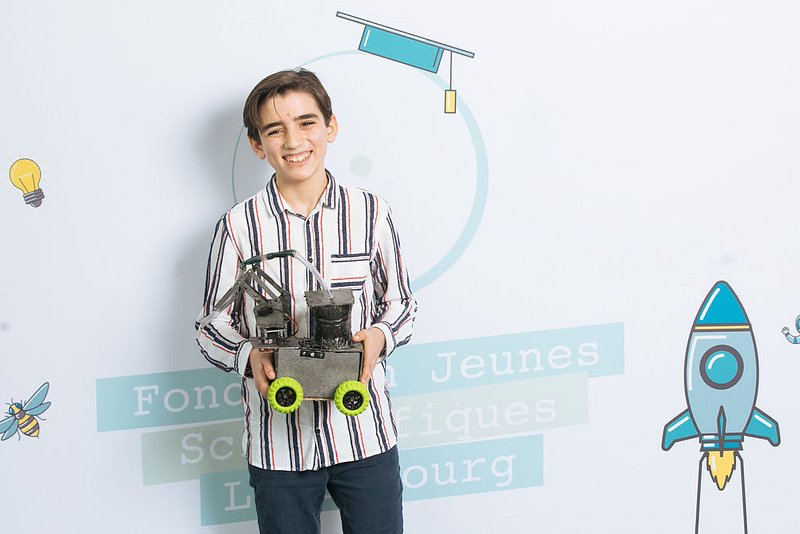 What happens after the bees die? Gonçalo Rafael Fonseca Correia invents a robot that could take on the role of pollinator. He practically taught himself to program.

“The extermination of bees is inevitable. In China, the flowers already have to be pollinated by hand.” Young researcher Gonçalo is not a great optimist. However, his concerns are partly justified: although honeybees are unlikely to become completely extinct in the near future, their situation is frightening. No serious scientist today denies the influence of climate change and environmental pollution on species extinction.

Robot from a science fiction film

Instead of mourning the insects for a long time, the 14-year-old student from the Lycée Bel-Val is already proposing a solution: why not just invent a robot that fertilizes the flowers instead of the pollinators? So, with that bee in his bonnet, Gonçalo got to work. The result could come from an unlikely source, something that could be seen a science fiction film.

Beerobot has a trunk that sucks nectar with the help of a miniature pump. Its four wheels can be remotely controlled via an app. And the bee robot has eyes too! A webcam transmits a live video to the smartphone, which can be placed in VR glasses. The nectar collection and the resulting pollination can therefore be conveniently controlled remotely without unnecessarily sending workers to the field.

As if his invention were the most trivial in the world, Gonçalo explains the anatomy of his machine. He soldered a little here, programmed something there, screwed a little there. The 14-year-old taught himself everything exclusively with the help of YouTube videos.

"Some of the clips are in German, but most of them are in Portuguese." There is a large computing scene, especially in Brazil, enthuses the young inventor. Last year he wanted to take a programming course at school, but unfortunately it was canceled due to the pandemic. However, that didn't stop him from pursuing his passion.

Science can make the world a better place

The autodidact doesn't just program for fun! “Good science should always try to make the world a better place,” says Gonçalo. Therefore, he is particularly enthusiastic about humanitarian perspectives.

Last year, the student took part in a research project in the national Jonk Fuerscher Contest of the Fondation Jeunes Scientifiques Luxembourg (FJSL). At that time he was trying to find out whether vegans, vegetarians or omnivores lead a healthier lifestyle. However, his samples were too small to draw any scientific conclusions from them. But participation is everything, explains Gonçalo, and he has been able to draw a lot from his experience.

"I always feel good when I can help."

And with no little success! This year the student developed an original idea with the Beerobot and carried it out to a tee. He was also able to convince the jury of his invention. “My cousin said from the start that I would win a prize. But I didn't mean to be too arrogant. In the end it only brings bad karma! "

Gonçalo loves to program. He doesn't want to specialize in this despite his great talent. On the one hand, the US-Americans are miles ahead of the Luxembourgers in software development anyway, because they learn that at school from an early age, laments the 14-year-old. On the other hand, Gonçalo thinks that as a microbiologist or pharmacologist, he can contribute the most to mankind. “I always feel good when I can help.”

And, if he could help agriculture with his bee robot, then that would give hims a sense of real satisfaction.