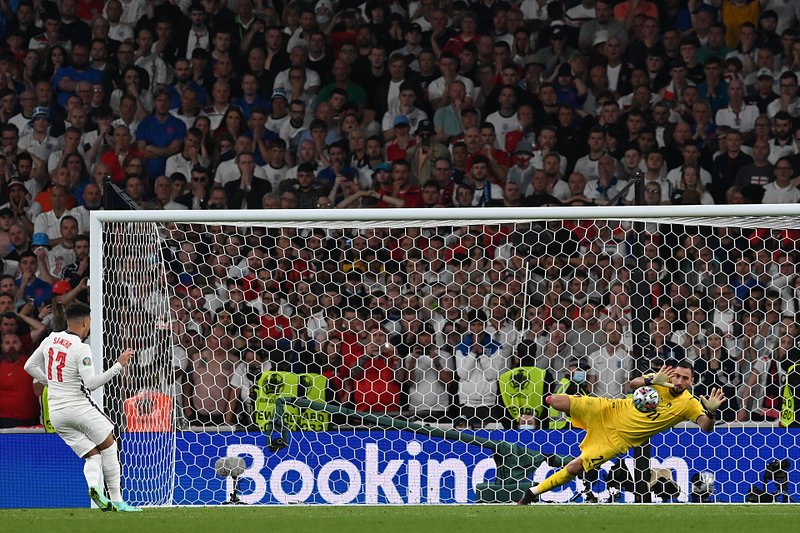 Italy's goalkeeper Gianluigi Donnarumma saves a shot by England's forward Jadon Sancho in the penalty shootout during the UEFA EURO 2020 final football match between Italy and England at the Wembley Stadium in London on July 11, 2021. / © Paul ELLIS / POOL / AFP

How likely are footballers to score penalties, particularly in shootouts? Researchers examined whether the penalty position (first or last in the lineup) makes a difference.

Sunday's Euro 2020 final between Italy and England ended in a thrilling penalty shootout, as players on both sides struggled to hit the mark from the spot. Italy eventually were crowned champions, but could the teams have done more to ensure success in a shootout?

A study by sports psychologist Geir Jordet shows that 75% of all penalties land in the net, with 25% missed or saved. A goalkeeper can use their entire body to cover around 20% of the goal area. But the chances of scoring often depend on where the player aims the ball, as well as their position in the penalty-taking lineup. This article presents more conclusions from the statistical study.

Can players increase their chances of scoring?

Players are certainly more likely to score if they aim for the far corners of the goal. Particularly the top right or left corners will cause issues for goalkeepers, as they will have little chance to react.

If it's that easy, why doesn't everyone aim for the corners?

Aiming for the corner of the goal also increases the risk of missing it entirely, sending the ball off to the side. This risk increases if the player is tired, or suffering from muscle aches and cramps after a long game. Nerves play a role as well. For this reason, only players with a strong nerve tend to opt for this method of scoring.

What should a player do if they are not confident in such a precise art?

The majority choose a side to aim for, thus almost forcing the goalie to pick a side before the shot is taken. The time lapsing between the moment the ball is kicked and the moment it reaches the goal - around 0.4 seconds - is often not sufficient for even the best of goalkeepers to react. If the goalie dives in the wrong direction, even a less precise shot is likely to make it into the back of the net. The run-up to taking the penalty itself can be a decisive factor in this instance.

Some footballers aim for the centre of the goal - does this make sense?

Statistically, 50% of penalties are aimed at the right side of the goal, while 49% are aimed at the left side. Footballers aiming for the centre often do so in the hope that the goalkeeper will dive into one of the corners, and will have moved too quickly to react to a ball aimed down the middle of the goal. England's goalkeeper Jordan Pickford (L) concedes a goal hit by Italy's midfielder Jorginho during a penalty shoot-out at the end of the UEFA EURO 2020 final football match between Italy and England at the Wembley Stadium in London on July 11, 2021. / © FACUNDO ARRIZABALAGA / POOL / AFP

Is it worth it for goalkeepers to practise patience then?

Yes, according to statistics. A goalie who chooses to place themselves in one of the corners will save just 15.5% of penalty shots. If the goalkeeper waits for the player to take the shot, there's a 29.6% chance of saving the penalty.

However, patience could also pay off for the player taking the penalty - if they decide on a corner prior to taking the shot, there is a 71.5% chance of success. If they wait for the goalkeeper to show signs of movement, the chance increases to 94.3%.

Which player should take the final penalty in a shootout?

Ideally the last player to step up to the spot should be confident and precise about shooting. Good nerves help with the pressure, which increases throughout a penalty shootout and is at its highest point for the last strike.

Statistically, the easiest penalty is the first, with 87% of first penalties converted. The chance of scoring drops to 73% by the fourth penalty as the pressure mounts. Another trick could be wearing heavier boots for penalty shootouts, lending more force and speed to a shot and therefore increasing chances against savvy goalkeepers. Furthermore, such a trick conforms with the rules!