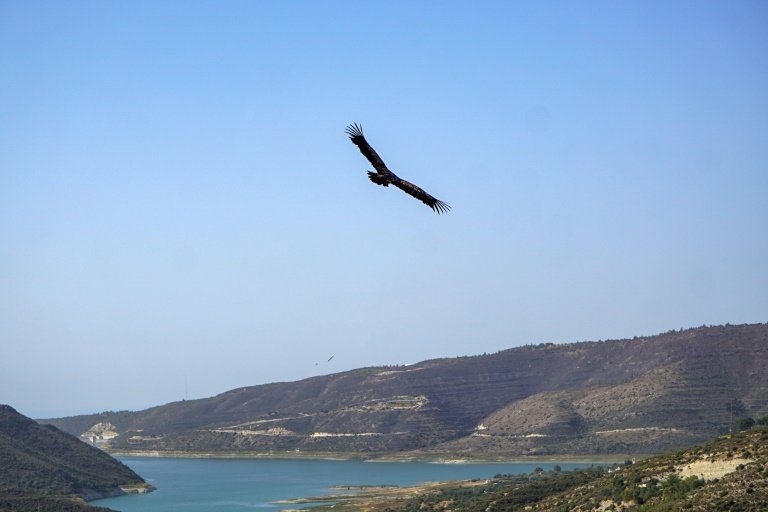 Since 2005, 31 vultures have been poisoned, leaving Cyprus with a population of only nine, which is being restocked with birds from Spain / © AFP

Cypriot authorities have for the first time issued fines for the killing of rare wild birds using poison baits, conservationists on the Mediterranean island said Monday.

Fines totalling 21,000 euros (almost $23,000) were last week ordered for an individual after three birds of prey were found dead at a rural property in the southern Limassol district, the group BirdLife Cyprus said.

The punishment "represents a big step forward that will hopefully have a strong deterrent effect on similar illegal actions", BirdLife's project coordinator Melpo Apostolidou said in a statement.

"It is the first time in Cyprus the crime of using poison baits and killing wild birds with the use of poison has been prosecuted."

The offences occurred in December 2021 when two rare Bonelli's eagles and one long-legged buzzard were found dead near Dierona village after a GPS transmitter fitted to one of the eagles led authorities to the discovery.

Evidence collected linked the deaths to the suspect who was found to have intentionally killed the animals "to protect chickens" from the birds, Apostolidou said.

Under Cypriot law, courts can impose prison sentences of up to three years or fines of up to 20,000 euros, or a combination of both for each offence.

BirdLife described the use of poison baits in the countryside as a wildlife crime, saying it has driven iconic species including the griffon vulture to the brink of extinction in Cyprus.

Once a common sight over Cyprus -- in the 1950s there were several hundred of the large scavengers across the island -- there are now thought to be only nine griffon vultures left.

Since 2005, 31 vultures have been poisoned and attempts are being made to restock the population with birds from Spain.

Apostolidou called on the authorities to do more to prevent the poisonings.