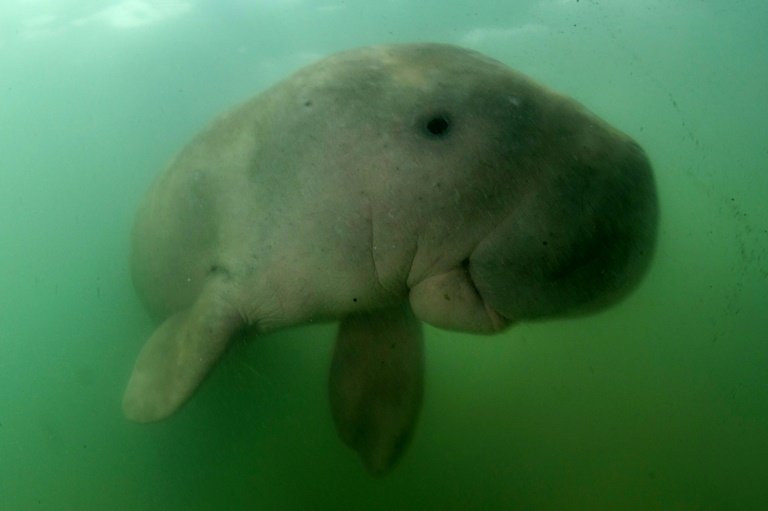 This picture taken on May 23, 2019 shows Mariam the dugong as she swims in the waters around Libong island, Trang province in southern Thailand / © AFP/File

These gentle cousins of the manatee graze on seagrass in shallow coastal waters, and are an important source of ecotourism in their tropical habitats.

Despite their moniker, they are more closely related to elephants than to cows.

Their primary threats are unintentional capture in fishing gear in East Africa and poaching in New Caledonia, as well as boat injuries in both locations.

In East Africa, fossil fuel exploration and production, pollution and unauthorized development are also degrading their seagrass food source. In New Caledonia seagrass is being damaged by agricultural run-off and pollution from nickel mining, among other sources.

Habitat degradation is compounded by climate change throughout the dugongs' range in the Indian and western Pacific Oceans.

The updated list comes as delegates from across the world meet in Montreal for a UN biodiversity conference to finalize a new framework for "a peace pact with nature," with key goals to preserve Earth's forests, oceans and species.

IUCN deputy director Stewart Maginnis told AFP: "The ability to slow and limit extinction rate, to buy us more time has been focused very much on a large terrestrial species."

"But the fact is that we are 30 years behind on effective marine conservation -- now hopefully we can catch that up."

Climate change is driving ocean acidification as well as deoxygenation, while flows of agricultural and industrial pollution from the land are causing significant impacts on ocean species, effects that cascade throughout food webs.

Maginnis stressed that the Red List is not a hopeless catalog of doom -- it serves as a scientifically rigorous tool that helps focus conservation action.

It includes more than 150,000 species, with over 42,000 threatened with extinction. Over 1,550 marine animals and plants assessed are at risk of extinction, with climate change impacting at least 41 percent of those threatened.

In other updates to the IUCN list, 44 percent of all abalone shellfish are now threatened with extinction, while pillar coral has moved to "critically endangered."

They are also deeply susceptible to climate change, with a marine heatwave killing 99 percent of Roe's abalones off Western Australia in 2011.

Agricultural and pollution run-off also cause harmful algal blooms, which have eliminated the Omani abalone, a commercial species found in the Arabian Peninsula, across half of its former range.

Twenty of the world's 54 abalone species are now threatened with extinction.

"Abalones reflect humanity's disastrous guardianship of our oceans in microcosm: overfishing, pollution, disease, habitat loss, algal blooms, warming and acidification, to name but a few threats," said Howard Peters of the University of York who led the assessment.

"They really are the canary in the coal mine."

Pillar coral, which are found throughout the Caribbean, moved from "vulnerable" to "critically endangered" after its population shrunk by over 80 percent across most of its range since 1990.

Bleaching caused by sea surface temperature rise -- as well as antibiotics, fertilizers and sewage running into the oceans -- have left them deeply susceptible to Stony coral tissue loss disease, which has ravaged their numbers over the past four years.

Overfishing around coral reefs has piled on more pressure by depleting the number of grazing fish, allowing algae to dominate.

"The pillar coral is just one of the 26 corals now listed as Critically Endangered in the Atlantic Ocean, where almost half of all corals are now at elevated risk of extinction due to climate change and other impacts," said Beth Polidoro of Arizona State University.