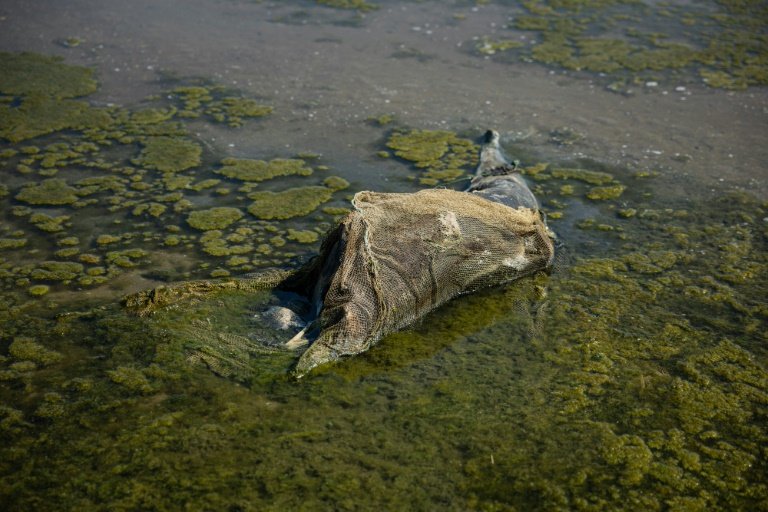 One of Turkey's most influential marine biologists is pleading for the creation of an "ecological corridor" to save dolphins and other sea creatures from destruction during Russia's war on Ukraine.

Bayram Ozturk spoke to AFP one day after Ukrainian President Volodymyr Zelensky accused Russia of waging an "ecocide" that was devastating marine life across the Black Sea -- shared by Turkey on its southern end.

The war in Ukraine is currently casting a shadow over a United Nations biodiversity conference that kicked off this week in Montreal.

Russia has pushed back hard against allegations levelled in Montreal by a group of Western nations that its nearly 10-month invasion was creating an environmental disaster across the region.

The head of the Turkish Marine Research Foundation wants the world to take a closer look at just how much damage has already been done.

"We need international surveillance. We need to know what is happening exactly," he said in a telephone interview.

"This is a big crime against nature," Ozturk said of the war's impact on the Black Sea.

His biggest immediate worry is that fighting this winter will interrupt the natural migration period of dolphins across the Black Sea.

"There should be an ecological corridor starting from the Danube River to the Odessa area, where there's a highly concentrated dolphins population," he said of a region near Ukraine's southwestern border with Romania.

"War should be stopped there for at least two or three months between January and April, during the dolphins migration period."

The fate of dolphins is one of the most emotive issues on the conflict's environmental front.

Zelensky presented a Ukrainian report suggesting that at least 50,000 dolphins -- or a fifth of their estimated Black Sea population -- had died as a direct consequence of the war.

Ozturk said a lack of real research and the war's raging impact made it impossible to estimate the true number of dead dolphins in the sea.

He put the number in "at least the hundreds" -- many of them victims of the low-frequency sonars emitted by Russian warships and submarines.

"Dolphins suffer acoustic trauma because of the low-frequency sonars. It damages their orientation system and they get stranded," he said.

But "other species deserve protection as well, not only dolphins," Ozturk stressed.

"The ecosystem is a whole. You cannot protect one species and not another one."

Ozturk's foundation will organise a Black Sea conference in Istanbul on Friday at which he will continue exchanging ideas with colleagues from the sea's other lateral states.

But some of his most intriguing exchanges have come with scientists from Russia -- a nation increasingly cut off from the Western world.

"They are very cooperative and they feel ashamed about what is going on but they all say they cannot do anything," he said.

Russian President Vladimir Putin warned on Wednesday that his invasion -- initially planned to be completed in just days -- might turn into a "lengthy process".

Ozturk worries that an even more protracted conflict might leave little for the international community to save the day the war finally ends.

"If you kill everything, not only dolphins but also fish and all the coastal habitat for fish, invertebrates, birds -- who will be held to account?" he asked.

"How can the Ukrainians and others be compensated for the ecological damage? Someone should be called to account."