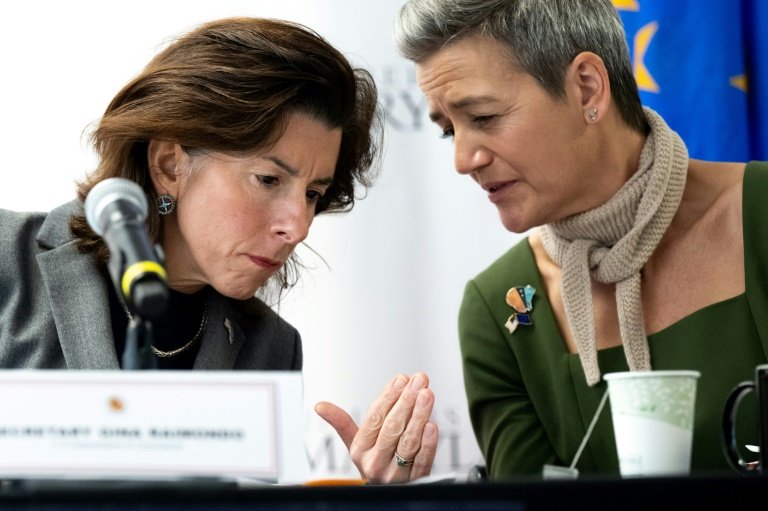 US and European Union officials met for trade and technology talks Monday, but hanging in the balance were heightened tensions over American subsidies for its green industry that Europe considers anti-competitive.

Officials touched on issues such as fallout from Russia's invasion of Ukraine and questions over economic coercion, but all eyes were on Washington's landmark Inflation Reduction Act (IRA) during a meeting of the US-EU Trade and Technology Council, held just outside Washington.

The act, designed to accelerate the US transition to a low-carbon economy, contains around $370 billion in subsidies for green energy, as well as tax breaks for US-made electric cars and batteries.

EU countries have poured criticism on the IRA, seeing it as a threat to European jobs, especially in the energy and auto sectors.

Monday's talks, the third of their kind, are part of a push "to grow the bilateral trade and investment relationship," according to a National Security Council statement.

"We acknowledge the EU's concerns and underline our commitment to address them constructively," the statement added.

"Clearly they are trying to set out our concerns in a non-confrontational manner," a European official involved in the talks told reporters Monday.

"It was flagged as a dispute, obviously, to which I think we're still waiting for a more solid response," he added.

Asked about "tweaks" mentioned last week by US President Joe Biden -- so that European companies would not be unfairly treated -- the official said the "assessment is that this will be extremely difficult."

But officials struck a conciliatory note at a press briefing after their meeting, with the EU's trade commissioner Valdis Dombrovskis saying, "Today we are leaving this meeting a slightly more optimistic than we were entering (it)."

US Secretary of State Antony Blinken, a co-chair of the council, added: "The bottom line is this: We are committed to moving forward together not at the expense of each other, but to the benefit of each other."

Both sides found agreement on a host of other issues, including an information-sharing system on public support for the semiconductor sector to increase transparency.

They also entered a deal to implement an early warning mechanism to mitigate semiconductor supply chain disruptions "in a cooperative way."

Both parties launched a "transatlantic initiative on sustainable trade" as well, with an aim to decarbonize energy-intensive industries and help with the transition to more circular economies, the statement said.

But EU Internal Market Commissioner Thierry Breton had decided not to take part in the meetings, his office earlier said, finding that they no longer give enough space to issues of concern to many European industry ministers and businesses.

Last month, Breton threatened to appeal to the World Trade Organization and consider retaliatory measures if the United States did not reverse its subsidies.

The plan was also a subject of discussions between President Biden and his French counterpart Emmanuel Macron at a state visit last week.

Biden said both sides have agreed to discuss practical steps to coordinate and align their approaches, though he added that he would not apologize for the act, which he maintains was never intended to disadvantage US allies.