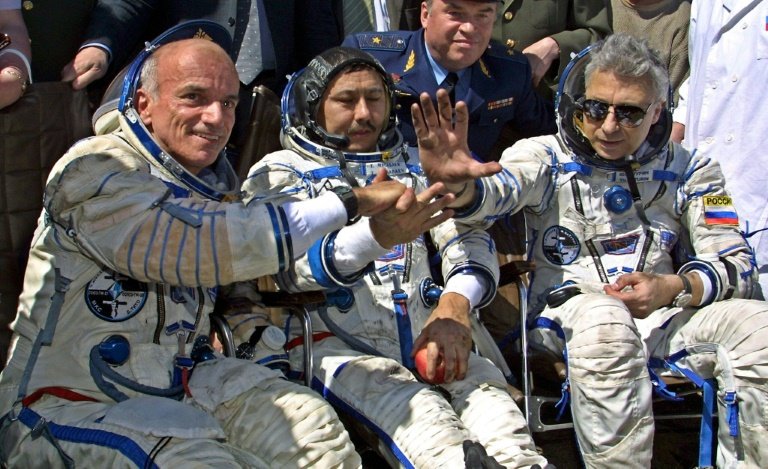 US space tourist Dennis Tito (L) shakes hands with his crew members Talgat Musabayev (C) and Yuri Baturin (R) after their landing near the Kazakh town of Arkalyk (some 300 km from Astana), 06 May 2001 / © AFP

Dennis Tito, an American entrepreneur who in 2001 became the first person to pay for their own space voyage, said Wednesday he plans to fly with his wife Akiko on a future SpaceX mission around the Moon.

The voyage will take place after Elon Musk's company has finished developing its prototype Starship rocket and has flown a first commercial flight that will include Japanese billionaire Yusaku Maezawa.

"Since my first human spaceflight I continue to be passionate about space, and the possibilities it has for all humanity, which leads me to this mission" Tito, 82, told reporters on a call Wednesday.

The weeklong mission would see Starship fly within 125 miles of the lunar surface before returning home.

Tito did not disclose how much he and Akiko had paid for their tickets, but said ten more seats remain open for others to sign up.

Maezawa, on the other hand, has chartered all the seats on his mission called "dearMoon," set to fly no sooner than 2023 but likely much later.

In 2001, Tito paid $20 million to fly on a Russian rocket to the International Space Station, heralding the era of space tourism.

An aeronautics and astronautics engineer by training, Tito worked for NASA's Jet Propulsion Laboratory in the 1960s, before founding the investment management firm Wilshire Associates in 1972.

Japanese born Akiko, a systems engineer who later moved to the finance industry and relocated to New York in 1995, added: "I want people to know that they can do whatever they set their mind to.

"It's never too late, no matter your age, race or gender."

It's unclear when SpaceX will commence commercial missions with Starship -- a giant rocket that the company hopes to one day use to colonize Mars.

Musk has promised the rocket will complete its first orbital test this year, and a version of Starship has already been selected to be used as a lander for NASA's Artemis missions to return humans to the Moon.