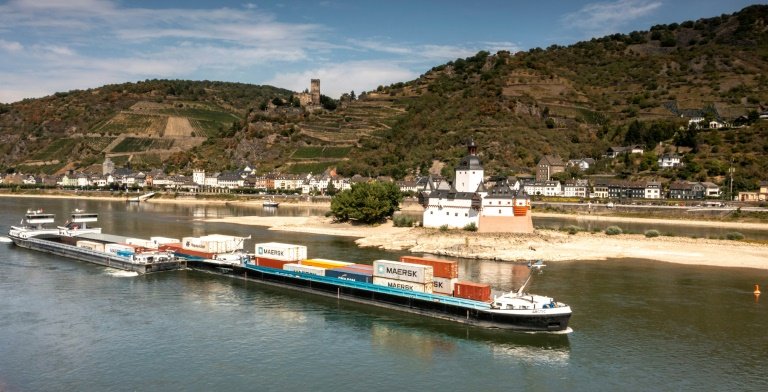 A stranded cargo ship caused traffic to be halted Wednesday at the Rhine river in western Germany after suffering a technical fault, authorities said, at a time when water transport was already ailing from a drought.

The vessel is stuck at St Goar and Oberwesel, in between the cities of Mainz and Koblenz, water police said, adding that they were expecting to clear the stricken ship within the day.

The machine damage came as water levels in the Rhine had dropped to critical points at several locations, including at nearby Kaub -- a known bottleneck for shipping where the river runs narrow and shallow.

The gauge at Kaub stood at 34 cm (13 inches) on Wednesday, well below the 40-cm reference point.

While vessels are still able to navigate at low water levels, they are forced to reduce their loads to avoid the risk of running aground.

About four percent of freight is transported on waterways in Germany, including on the Rhine, which originates in Switzerland and runs through several countries including France and Germany before flowing into the sea in the Netherlands.

Transport on the Rhine has gained significance in recent months because among cargo moved on the river is coal, now all the more necessary as Germany seeks to wean itself off Russian gas.

Germany's biggest companies have already warned that major disruptions to river traffic could deal another blow to an economy already beset by logistical difficulties.

The 2018 drought, which saw the benchmark depth of the Rhine in Kaub drop to 25 cm in October, shrank German GDP by 0.2 percent that year, according to Deutsche Bank Research.