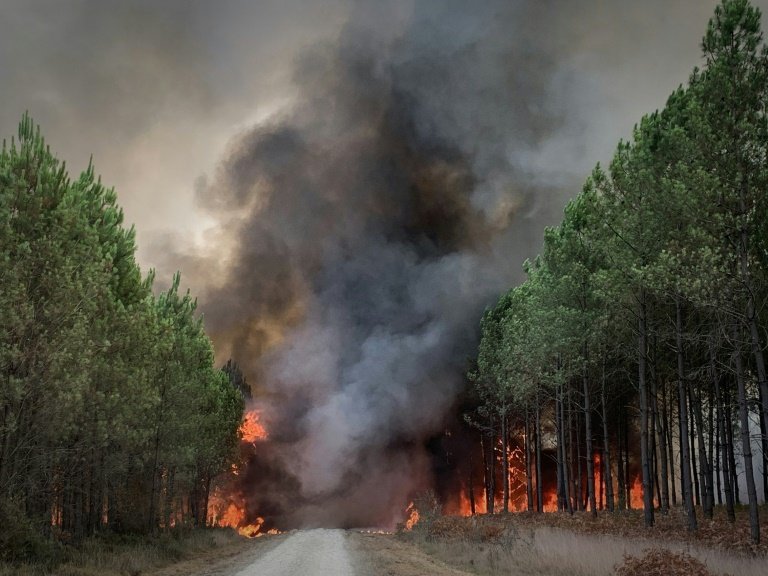 A fire that destroyed thousands of hectares of tinder-dry forest in southwest France has flared again amid a fierce drought and the summer's latest wave of extreme heat, officials said Wednesday.

An additional 6,000 hectares (15,000 acres) of pine forest have burned in the so-called Landiras blaze since Tuesday afternoon, forcing the evacuation of around 6,000 people, Gironde regional officials said in a statement.

"The fire is extremely violent and has spread to the Landes department" further south, home of the Landes de Gascogne regional park, the prefecture said, and further evacuations are likely.

"It's a major fire... much more intense and fast-moving" than at the height of the Landiras blaze that ignited in July, Marc Vermeulen of the regional fire-fighting authority told journalists.

No one has been injured in the coastal area that draws huge summer tourism crowds but 16 houses were destroyed or damaged near the village of Belin-Beliet.

The fire was spreading toward the A63 motorway, a major artery linking Bordeaux to Spain, with thick smoke forcing the road's closure between Bordeaux and Bayonne. 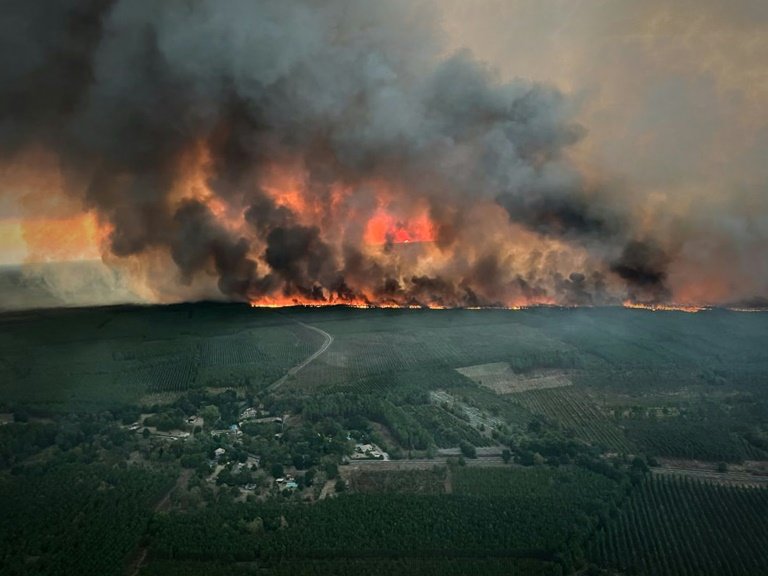 Officals have warned the fire is spreading toward the A63 motorway, a major artery linking Bordeaux to Spain / © SDIS 33/AFP

The Landiras fire was the largest of several that have raged this year in southwest France, which has been buffeted by record drought and a series of heat waves.

Arsonists set some of the fires and officials initially suspected a criminal origin for the Landiras blaze. Police later released a suspect for lack of evidence.

Around 500 firefighters are on the scene, supported by water-dropping planes.

The Gironde prefect, Martin Guespereau, said Wednesday "the risks are very high" that adverse weather conditions will allow the fire to spread further.

"The weather is very unfavourable because of the heat, the dry air, the record drought and the fact that there is a lot of peat in the ground... the fire didn't go out in July, it went underground," he told journalists.

The Landiras fire and a second large blaze near Arcachon burned a combined 21,000 hectares and forced more than 36,000 people to evacuate before they were brought under control -- but not fully extinguished.

Wildfires have also ignited in the dry hills of the southeast and even in the normally lush areas of Brittany along the English Channel.

On Wednesday, officials in western France said a forest fire near Angers and Le Mans has burned 1,200 hectares since Monday as nearly 400 firefighters struggle to contain it.