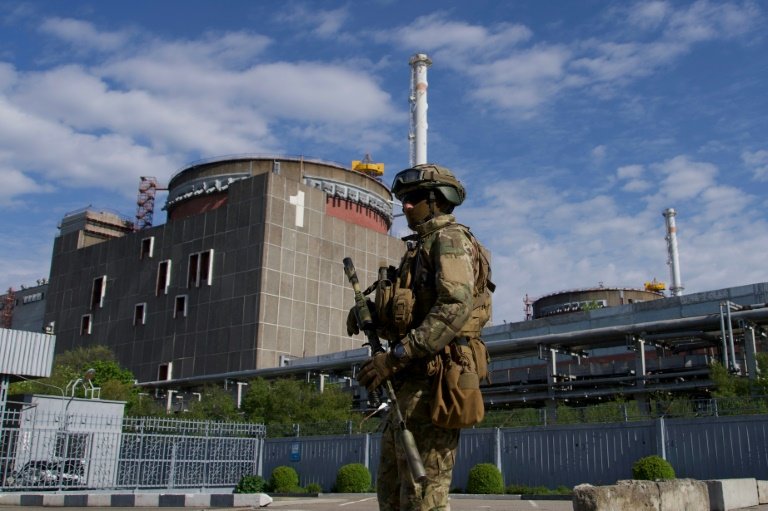 The Russian-held Zaporizhzhia power plant in Ukraine, which is at the centre of international concern amid mutual accusations of shelling by Moscow and Kyiv, is Europe's biggest nuclear plant.

Recent fighting around the plant has prompted the International Atomic Energy Agency (IAEA) to warn of the "very real risk of a nuclear disaster", while Kyiv has accused Moscow of "nuclear terrorism".

Fears of a possible incident have brought back haunting memories of the 1986 Chernobyl nuclear disaster in then Soviet Ukraine, which left hundreds dead and spread radioactive contamination across Europe.

Here are some key facts about the facility:

Located near the city of Energodar on the Dnipro River, the plant has six of Ukraine's 15 reactors -- enough to power four million homes.

The reactors were all switched on between 1984 and 1995, according to the Ukrainian state agency Energoatom, which runs the plant.

Before the war, the plant was generating around a fifth of Ukraine's electricity.

The country, which has significant uranium reserves, is the seventh-largest producer of nuclear power in the world, according to the IAEA.

It began developing nuclear energy in the 1970s with the construction of Chernobyl, near the capital Kyiv, and has made major improvements in nuclear safety over the years since that cataclysmic event.

The Zaporizhzhia plant is "relatively modern", Mark Wenman of Imperial College London told the Science Media Centre earlier, noting that its reactor components are housed inside a heavily reinforced containment building that can "withstand extreme external events, both natural and man-made, such as an aircraft crash or explosions".

The power plant -- located close to the Crimean peninsula which was annexed by Moscow in 2014 -- was captured by Russian forces on March 4 following a battle in the early days of Moscow's invasion.

The fighting caused a fire at a training facility. Firefighters said they were prevented from reaching the blaze for hours.

Energoatom initially shut off two of the reactors -- and more recently a third -- but the plant has continued to be operated by Ukrainian technicians under Russian control.

The IAEA has repeatedly said it wants to organise an inspection of the plant.

This was initially opposed by Ukrainian authorities but officials have sounded less adamant about the prospect recently.

Ukraine on July 21 accused Moscow of storing heavy weapons at the plant after Russia said Ukraine's troops had fired on the facility.

Energoatom said Russia had moved over two dozen pieces of military equipment and ammunition into the engine room of the first reactor.

US Secretary of State Antony Blinken said Moscow was using it as a "military base to fire at Ukrainians, knowing that they can't and won't shoot back".

On August 5, Ukraine accused Russian forces of carrying out strikes near a reactor. Russia said Ukraine was behind them.

Following the attacks, Energoatom said it would have to shut down another reactor because of damage to a power cable.

Another reactor is being repaired, meaning only two reactors are now functioning.

Ukraine says there are around 500 Russian troops at the plant and has called for the establishment of a demilitarised zone.

Despite the tensions, Energoatom has said it is still in contact with the plant and receives data on radiation monitoring.

It said on Monday that there had been no change to radiation levels.