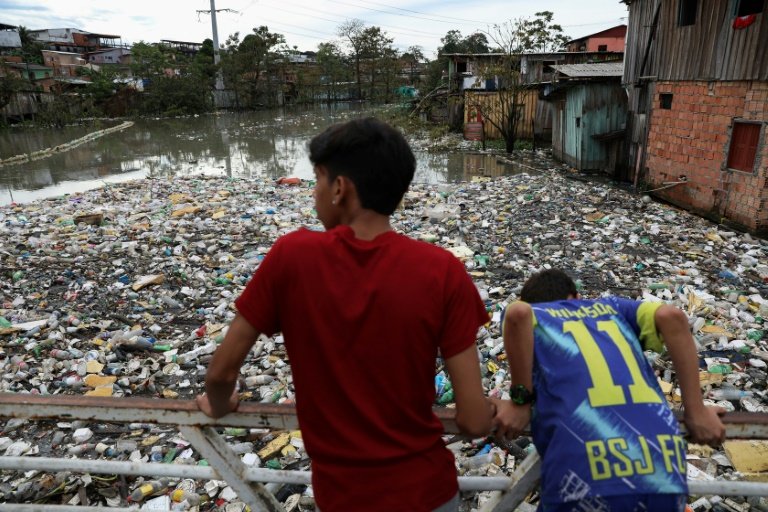 Residents of Manaus, Brazil's largest metropolis in the Amazon rainforest, look out over a river of trash -- a common occurrence in the city -- on June 5, 2022. / © AFP

In Manaus, the largest city in Brazil's Amazon rainforest, tons of stinking trash fill the canals and streams, giving one the feeling that they're visiting a post-apocalyptic wasteland.

On the west side of the city, in a poor neighborhood where homes have been erected on stilts, a worker uses an excavator to scoop up a bucket-load of bottles, pieces of plastic and even home appliances that have been tossed in the water.

Not far from the city's main port, municipal workers wearing orange uniforms gather garbage from a boat and pile it onto a big barge floating on the Rio Negro, one of the Amazon River's main tributaries.

With the rising water levels signaling an end to the rainy season, the mounds of trash are often intermingled with leaves and tree branches.

Each day, nearly 30 tonnes of debris is plucked from the water. In some areas, the water is almost completely covered.

The massive influx of trash to Manaus's waterways occurs around this time every year, but city authorities believe the situation has gotten worse in recent weeks.

From January to May, city workers have removed 4,500 tonnes of trash, most of which could have been recycled instead of being thrown in the river.

"The people who live on the water's edge throw garbage straight into the streams... few people put it in the trash," says Antonino Pereira, a 54-year-old Manaus resident who complains that the stench is unbearable.

According to the city's undersecretary of sanitation, Jose Reboucas, if the population was more aware of the costs associated with littering, the city could save one million reais (about $190,000) per month.

"The awareness of the population will be very beneficial for our city and especially for our environment," he told AFP.

The Amazonian region is also facing a major threat from deforestation, with more than 3,750 square kilometers (1,450 square miles) of jungle chopped down since the beginning of the year.