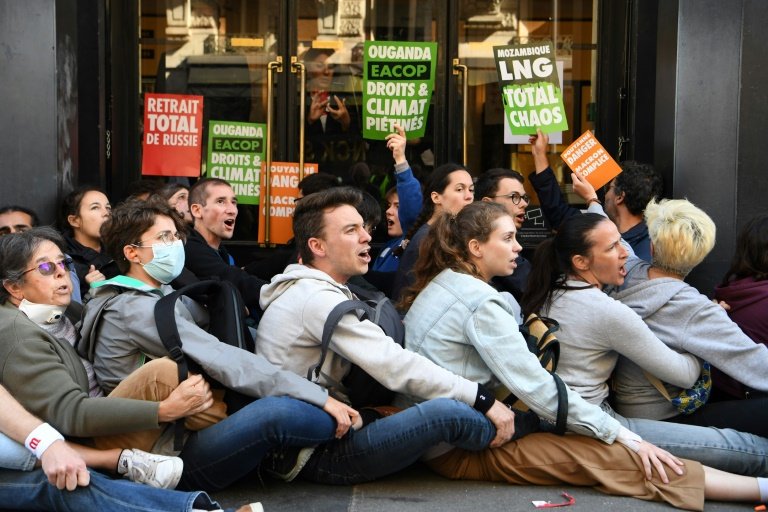 Greenpeace, Friends of the Earth and Alternatiba protesters handcuffed themselves to each other and impeded shareholders' access to the building, claiming that TotalEnergies is not doing enough to fight climate change.

"It is no longer possible for the old world to serenely meet to validate projects that are destructive to the climate, human rights and peace," the French branch of Friends of the Earth said on Twitter.

Activists unfurled a five-metre (16-foot) long banner saying, "no retreat, no general assembly", a reference to the energy firm's presence in Russia, where it runs liquefied natural gas projects.

The meeting at the Salle Pleyel concert hall in central Paris was eventually declared open by TotalEnergies chief executive Patrick Pouyanne, but with the venue almost empty as so few shareholders had been able to enter.

He said that the AGM could go ahead "as a certain number of shareholders are present".

TotalEnergies is aiming for net-zero carbon emissions by mid-century and has pledged to reduce emissions of its petroleum products by 30 percent compared to 2015.

Pouyanne said, however, during the AGM that a goal outlined by the International Energy Agency (IEA) for a 30-percent drop in the consumption of petroleum products within a decade was not tenable.

"We deviate from the IEA scenario, the fall in demand for oil and gas will not be linear, it will not fall by 30 percent over the next 10 years," he said in response to a question from a shareholder.

Detailing its goals through 2030, several shareholders had said in advance that they would vote against it as it was not ambitious enough.

A group of shareholders representing 0.78 percent of the giant's capital had also deposited a resolution -- that was rejected -- asking for the group to respect the Paris climate deal, which seeks to limit global warming to 2 degrees Celsius and if possible 1.5 degrees.

"There are shareholders who recognise the climate emergency but on the whole they are still too passive," Greenpeace France campaigner Edina Ifticene told AFP.

On Tuesday, oil giant Shell's general assembly in central London was suspended for two hours due to disruption from climate change activists.

Earlier on Wednesday, TotalEnergies announced it had bought a 50-percent stake in the US renewables producer Clearway Energy Group, as it seeks to expand its portfolio in the sector in the United States.