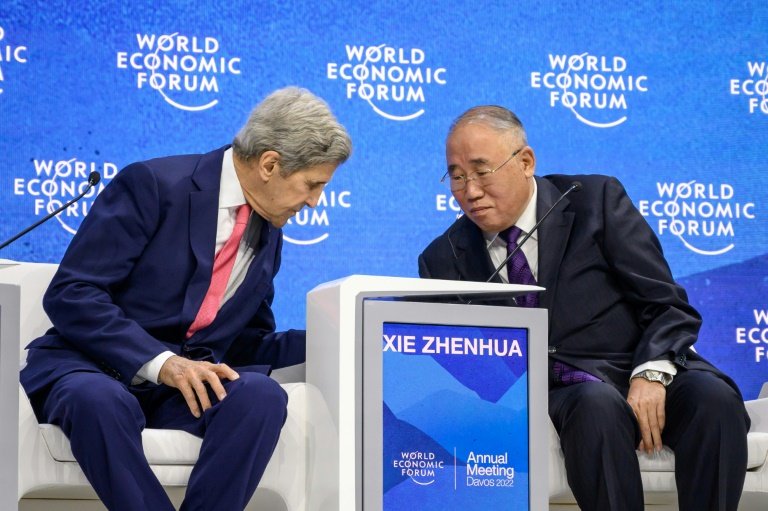 US climate envoy John Kerry warned Tuesday against using the energy crisis stemming from Russia's invasion of Ukraine as an excuse to build up more fossil fuel infrastructure.

Kerry made the plea at the World Economic Forum of global business and political leaders in the Swiss ski village of Davos, where the climate crisis is among the top concerns.

"We should not allow a false narrative to be created that what has happened in Ukraine somehow obviates the need to continue forward and to accelerate even what we are trying to do to address the crisis of the climate," Kerry said.

"No one should believe that the crisis of Ukraine is an excuse to suddenly build out the old kind of infrastructure that we had," he told a news conference.

Moscow's invasion of Ukraine has sent energy prices soaring over supply concerns as Russia is among the world's top producers of oil, natural gas and coal.

The European Union is aiming to cut Russian gas imports by two-thirds this year, and the bloc is debating whether to impose an oil embargo on the country.

The EU fears that Russia could seize on the bloc's dependence on its gas supplies to hold countries hostage over their opposition to the Ukraine war.

Kerry later told a panel discussion that the war had fuelled the argument that it "means you're going to drill a lot more and pump a lot more" to meet Europe's gas needs.

While Europe needs to find alternative gas supplies, it can be done in ways that do not require massive new infrastructure, including by investing in renewable technologies and tapping shale gas, Kerry said.

"We can meet... the crisis of Ukraine and the energy crisis of Europe and still deal, as we must, with the climate crisis," he said.

Kerry appeared on the panel alongside China's climate envoy, Xie Zhenhua, who warned that the world is "facing greater challenge than before."

"Here we would like to urge all countries to work together to overcome the challenges in front of us," Xie said. "We have to turn our pledges into concrete action."

The United States and China -- the world's two top economies and biggest polluters -- unveiled a joint pact on the sidelines of the Glasgow climate summit last year to accelerate action against greenhouse gas emissions.

The US has said it plans to be carbon neutral by 2050, while China has set a net-zero target for 2060 with coal consumption to peak at 2030.

The Glasgow summit resulted in nearly 200 nations pledging to speed up the fight against rising temperatures, though the agreement was criticised by activists as falling short of what is needed to save the planet.

Scientists say capping global warming at 1.5 degrees Celsius requires a 45-percent drop in emissions by 2030 and carbon neutrality by mid-century.