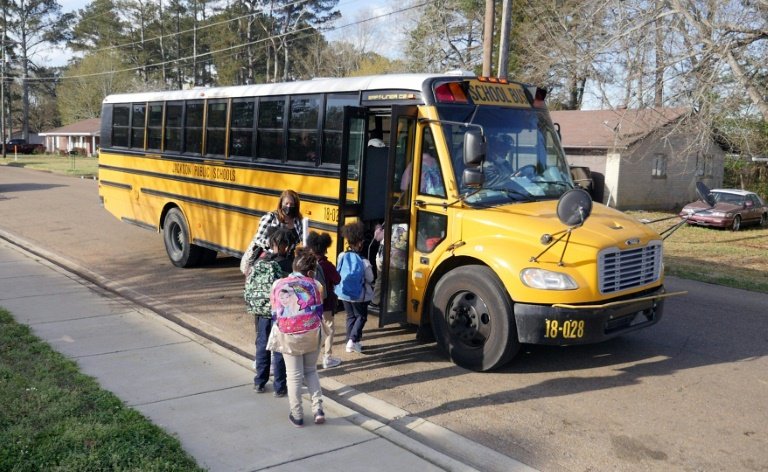 Children leave Wilkins Elementary school in Jackson, Mississippi, to use the bathroom at a neighboring school because theirs lacks the water pressure needed to flush the toilets / © AFP

Every morning, 180 students at a school in Jackson, Mississippi have to board a bus to be taken to another nearby school. The reason? Their school lacks the water pressure needed to flush its own toilets.

Cheryl Brown, the principal at Wilkins Elementary -- where 98 percent of the 400 students are African American and most come from underprivileged backgrounds -- doesn't hide her frustration.

Jackson is undergoing a severe water crisis -- despite its status as a state capital in one of the richest countries in the world. 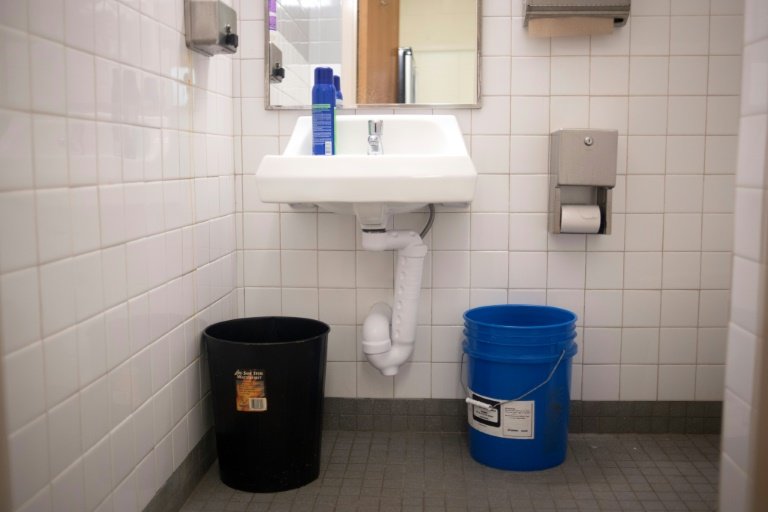 A blue bucket in a bathroom is full of water to be used for flushing the toilet at Wilkins Elementary School in Jackson, Mississippi / © AFP

Both the causes and symptoms of the crisis are clear: water flows from old and unmaintained treatment plants -- one is 100 years old -- through leaking, century-old pipes. When it comes out of city taps, it's sometimes rust-brown -- and always contaminated with lead.

"The distribution lines are aging, and a master plan for pipe replacement... is not being implemented," the US Environmental Protection Agency (EPA) wrote in a 2020 report.

It said the city loses as much as 50 percent of its water -- a stunning amount -- through the decrepit system.

As a result, "three local hospitals have drilled their own wells... to have access to reliable sources of drinking water." 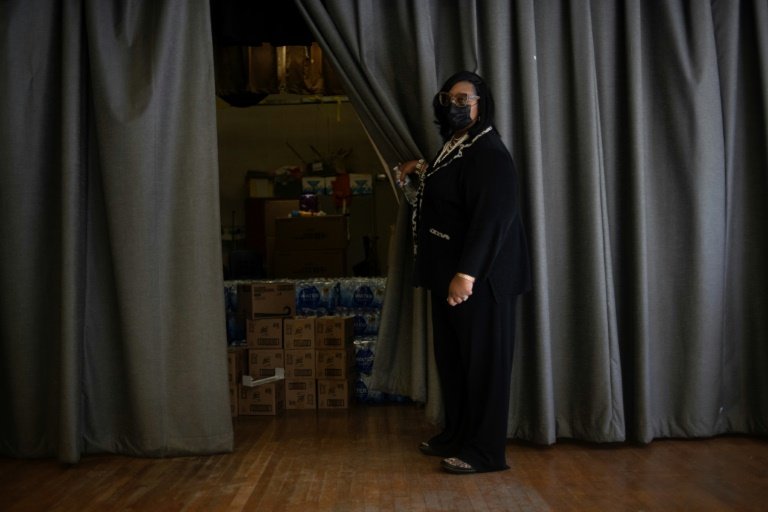 Cheryl Brown, principal of Wilkins Elementary School in Jackson, Mississippi, pulls back a curtain to show where they keep their bottled water for students / © AFP

One of the worst US public health scandals in years came when the details of poor water quality management were exposed in the northern industrial city of Flint, Michigan.

Both Flint and Jackson are majority Black, which for many observers confirms the existence of "environmental racism" -- with African Americans disproportionately affected by pollution.

Brown, the Wilkins principal, does not like to dwell on the issue.

But after relying for weeks on portable toilets -- forcing students to stand in long lines to wait their turn -- she now worries that the daily bus trips to another school are cutting into instruction time.

Charles Williams, who will be retiring as Jackson public works director this month after a long, wearying battle with the water crisis, told AFP the problems facing Jackson are complex.

"This didn't happen overnight," he said. "This was delayed maintenance and lack of funding."

He estimated the cost of updating the city's water system at $3 billion to $5 billion -- no small sum for a medium-sized city. 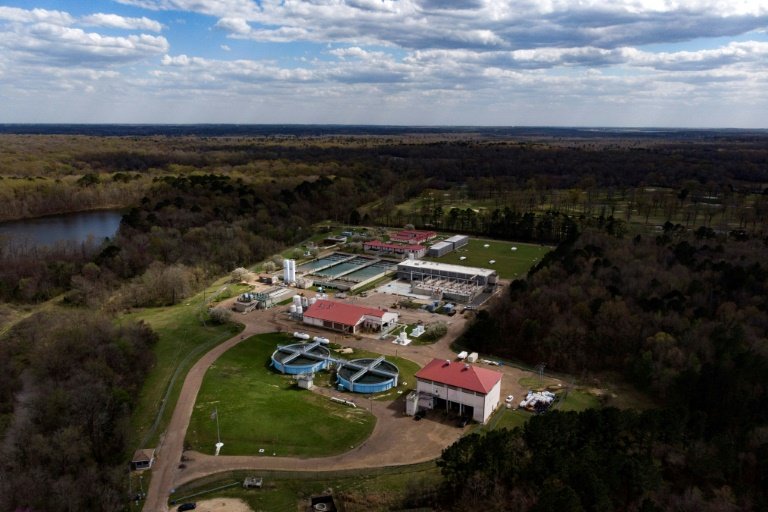 The city of Jackson, Mississippi temporarily shut down the O.B. Curtis Water Treatment Plant in November 2021 due to a bad batch of chemicals as well as faulty equipment / © AFP

How much help Jackson might get from the big US infrastructure package is not yet clear, though the EPA has encouraged "communities such as Jackson with critical water infrastructure needs" to apply.

A lengthy investigative article in the Mississippi Free Press by journalist Nick Judin identified two problems underlying Jackson's woes: a past drop in EPA funding for local water projects and a population exodus from the city to the suburbs.

Having lost a fourth of its population since 1980, Jackson's tax base has dropped accordingly.

Judin also blames the sometimes chaotic administration of the water system, which has resulted in some residents receiving bills intermittently while "some people don't get billed at all." 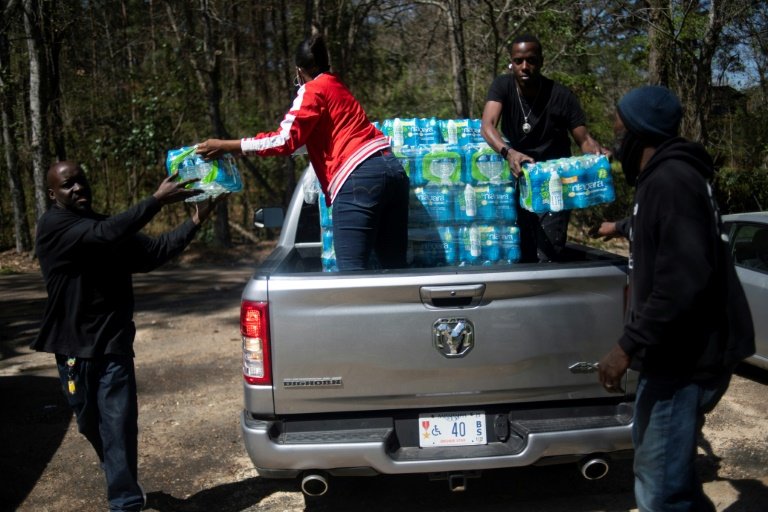 Members of Operation Good distribute cases of water at an apartment complex in Jackson, Mississippi / © AFP

But early in 2020, the group agreed to reimburse the city $90 million after the city said Siemens had failed to ensure its water meters and software system were compatible.

An unusually cold winter then resulted in the main water treatment plant shutting down and numerous old water pipes bursting.

Since then, things have gotten no better, local residents told AFP.

"We haven't drunk the (city) water in about 12 years," said Priscilla Sterling, standing on the sidewalk of Farish Street in a once-prosperous Black business district.

"You're still taking a chance when you bathe in it."

Barbara Davis works in a Jackson church. She turns on a tap to show the rust-brown water flowing out. 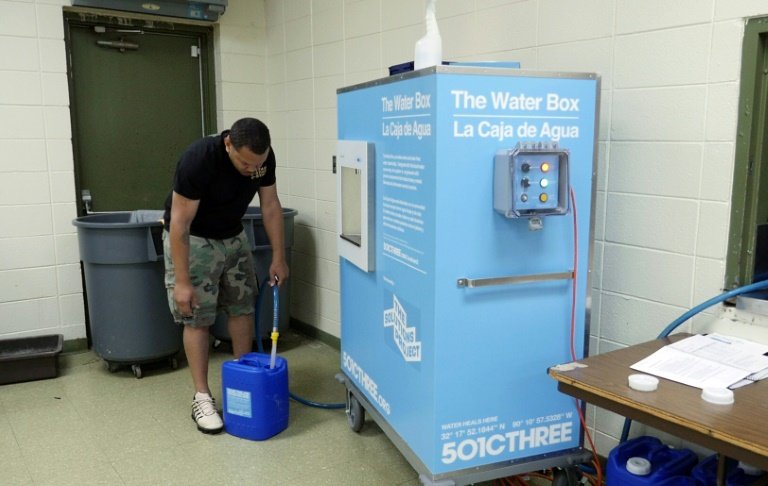 In one hard-hit neighborhood, an NGO called 501CTHREE has brought in a water filtration device where residents can fill jugs with clean water.

"Everybody can’t go to the store and buy water," said Terun Moore, who works with a local NGO, Strong Arms of Jackson.

The city, for its part, insists that Jackson water, brown though it may be, is safe -- except for pregnant women and children.

Not one local resident interviewed by AFP said they trust assessment.