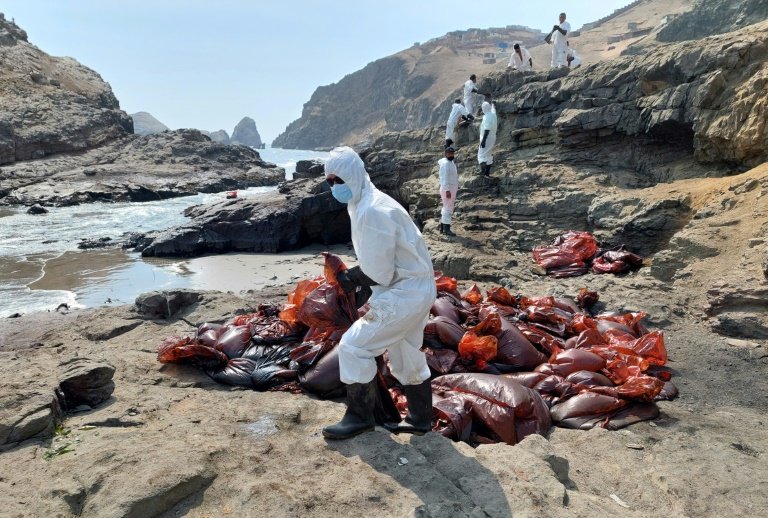 Hundreds of traditional fisherman living just outside the Peruvian capital fear their livelihoods are ruined following an oil spill caused by a volcanic eruption thousands of miles away.

Authorities called the spill, caused by an eruption on the other side of the Pacific near Tonga, the worst ecological disaster in Lima in recent times.

Traditional fisherman in Ventanilla, a district to the north of Lima's port in Callao, on Wednesday protested outside the gates of the Pampilla Refinery owned by Spanish energy giant Repsol, demanding compensation for the spill that occurred as freak waves hit a tanker during offloading on Saturday.

"How will we live now? That's our worry," Miguel Angell Nunez, who led the protest, told AFP.

"We've lost our source of work and we don't know when this will end.

"We want them to recognize the damage. The spill was caused by (Repsol's) negligence."

It is an area teeming with sole, lorna drum and Peruvian grunt, commonly used in the local delicacy ceviche, a marinated raw fish dish that Peru is famous for.

The few that own small boats only travel short distances along the shoreline.

The Ventanilla spill sent 6,000 barrels of oil into the sea.

The attorney general's office said the spill had "put at risk flora and fauna in two protected areas."

Authorities pulled dead fish and birds covered in oil out of the sea, and had to seal off three beaches, meaning hundreds of fishermen had nowhere to go to work.

Refinery officials said they had erected "containment barriers that cover all of the affected zones and brigades with specialist sea and land teams have been deployed."

But fishermen, some of whom live hand to mouth, fear that they could be prevented from working for years.

"Today we don't have work, what are we going to do?"

Espinoza blames Repsol for "lacking a contingency plan" for the damage to flora and fauna.

The spill has spread to beaches in neighboring districts where authorities have found dead sea lions and penguins.

The health ministry said 21 beaches have been affected and warned bathers not to visit them.

Repsol work teams wearing white suits, boots and gloves were removing oil from beaches and crags on the Cavero beach in Ventanilla on Wednesday.

Workers use dustpans, shovels and long sponges to soak up the oil that cloaks the beach and gives off a pungent stench, while the navy guards the area.

Toiling in the summer sun, they tip the collected oil into barrels and plastic bags.

"It's not easy to work with this (oil) but unfortunately we have to work," said Giancarlo Briseno.

"The work is tough, quite toxic and burns your face," added Pedro Guzman.

Former environment minister Fabiola Munoz said it would take two years to clean up the spill.

The public prosecutor has opened an investigation for environmental pollution against the refinery.

It said the owners could face a fine of up to $34.5 million. 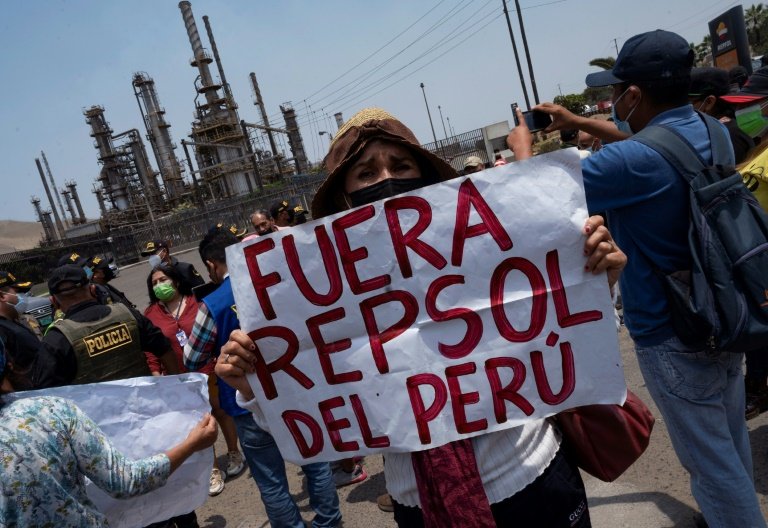 A woman belonging to the community affected by Peru's oil spill takes part in a protest against Spainsh energy giant Repsol, blamed for the accident / © AFP

"The State will be inflexible," warned Environment Minister Ruben Ramirez.

Tine van den Wall Bake Rodriguez, Repsol Peru's spokeswoman, said "we cannot say who is responsible" for the oil spill, which the company has blamed on the freak waves.

"We are extremely affected" by it, she added.

The Pampilla refinery has the capacity to process 117,000 barrels a day, which represents more than half of Peru's total oil output.