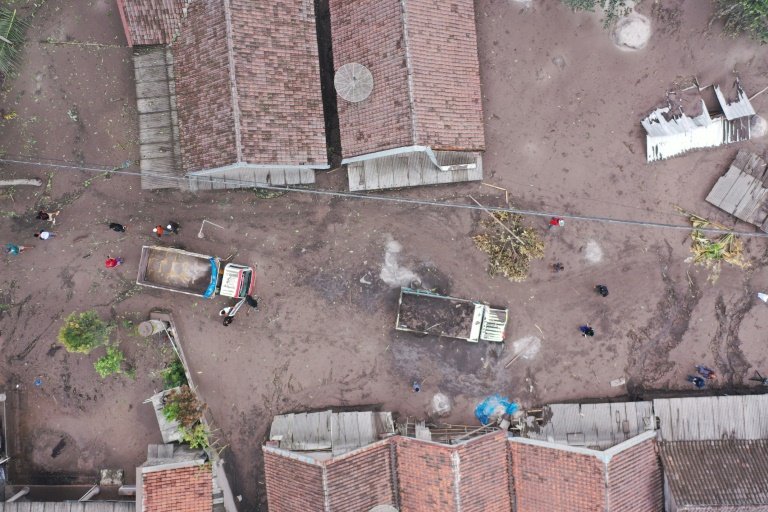 The biggest mountain on the island of Java thundered to life Saturday, ejecting a mushroom of volcanic ash high into the sky and raining hot mud as thousands of panicked people fled their homes.

Aerial photos showed entire streets filled with grey volcanic ash and mud, which had swallowed many homes and vehicles, including whole trucks. 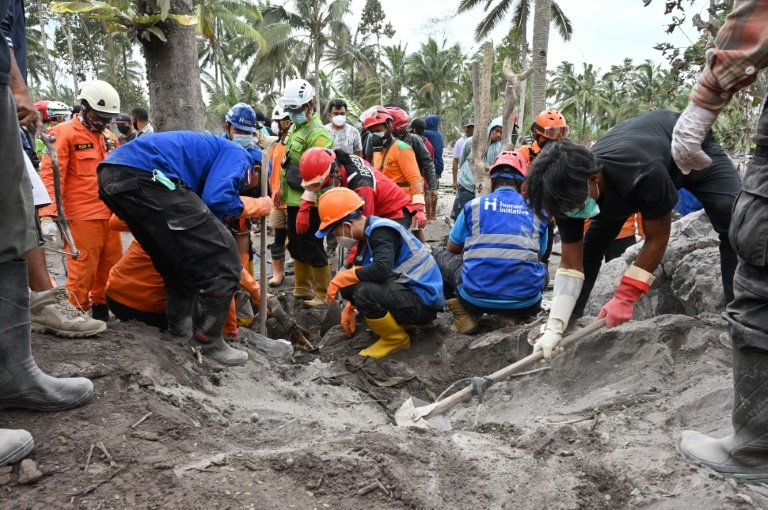 "I'm still hoping my son will be found... Every time I hear victims have been found, I hope it is my son," said Maskur Suhri of Sumberwuluh village, who was collecting palm tree sap when Semeru erupted.

"There's a very small chance he survived... Maybe it's my son's fate, but I still hope he will be found, even just his body."

"There was a small fresh eruption and it could endanger the evacuation teams," said rescue worker Rizal Purnama. 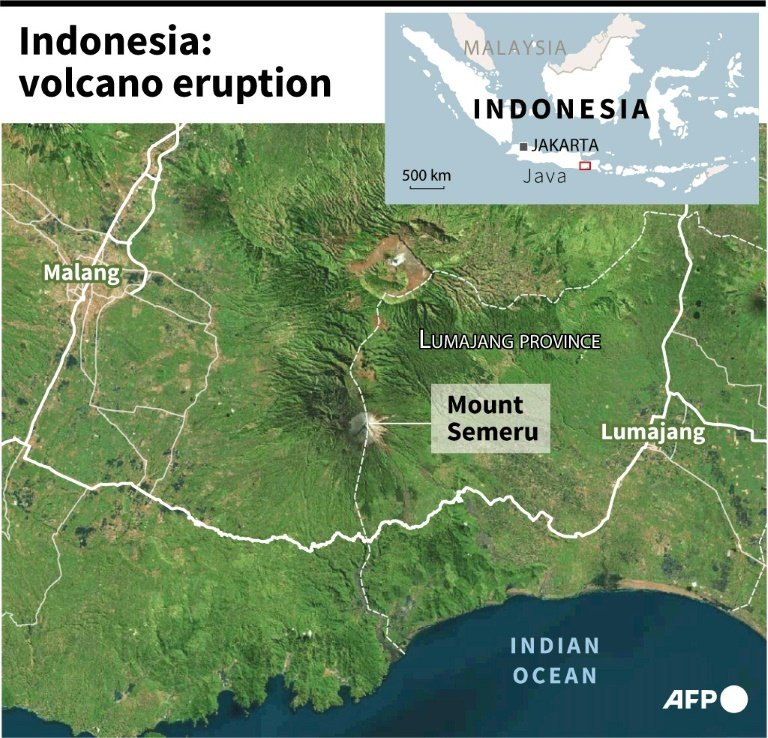 Dangerous thick plumes of smoke continued to emerge from areas blanketed by the volcanic ash, while rescuers in hardhats tried to dig through the mud to try and find survivors -- and recover bodies.

Their task was made more difficult as the volcanic debris had started to harden.

"It's very difficult... with simple tools," Rizal Purnama said. "It is very likely bodies that have not been found are buried under the hot mudflow."

Other rescuers helped desperate villagers salvage their belongings from wrecked homes. Some locals lifted mattresses and furniture on their shoulders while others carried goats in their arms.

Officials have advised locals not to travel within five kilometres (3.1 miles) of Semeru's crater, as the nearby air is highly polluted and could affect vulnerable groups. 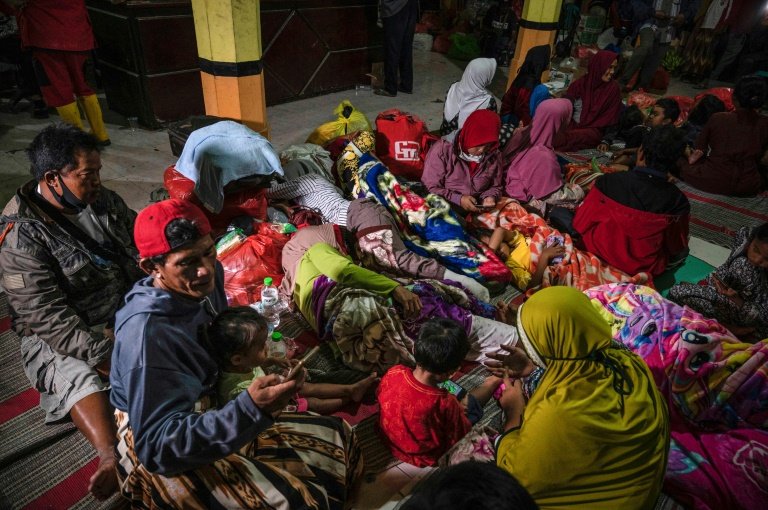 Ash from Semeru travelled up to four kilometres away after the Saturday eruption, Indonesia's geological agency reported.

A sand mine company's office in Kampung Renteng village was buried after the eruption, trapping 15 people, according to foreman Hasim, 65, who like many Indonesians goes by one name.

"There's no news from them. Only one operator was rescued, he's now at the hospital with burns," he told AFP. 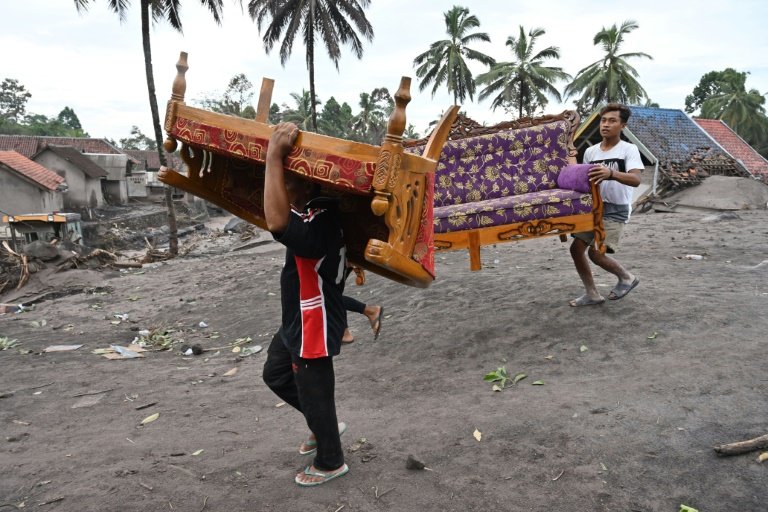 Villagers salvage their belongings after the eruption of Mt Semeru / © AFP

Hasim said he ran home after the eruption.

Rescue officials said some were buried inside their vehicles, with no time to escape.

Those who managed to find shelter recounted the horror after the eruption. 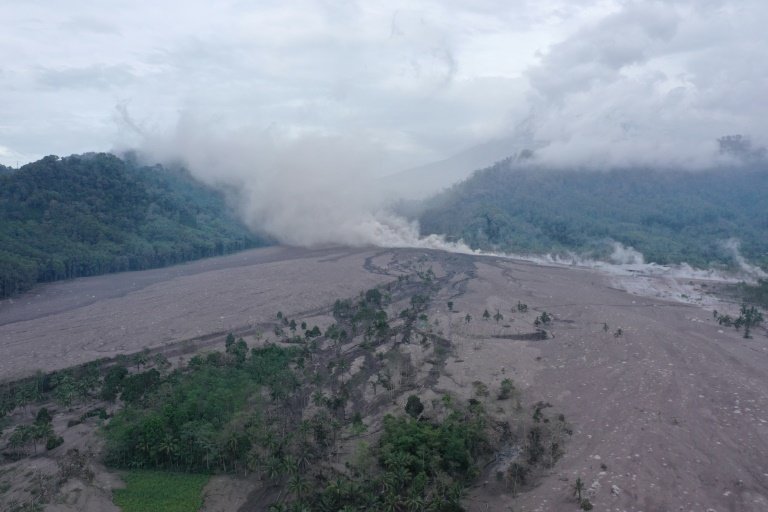 Suwarti Ningsi and her daughter were trapped for five hours at home after the eruption.

"I couldn't see anything, it was just like at night. Everybody was panicking," said the 42-year-old.

"I could only pray... for me and my daughter to be saved."

The Red Cross said it had rushed ambulances, medical teams, more than 65,000 surgical masks -- to protect against ash and Covid -- and other emergency supplies to the affected areas.

The ash and mud have also polluted the waterways around Mt Semeru, turning them into streams of dark grey sludge.

Rain is forecast for the area, which could further hinder rescue work.

There is also a risk of the rain causing ash sediment to form a new river of hot lava, the country's top volcanologist Surono told a local TV station.

Semeru's last major eruption was in December 2020, which also forced thousands to flee and wrecked villages.

Indonesia sits on the Pacific Ring of Fire, where the meeting of continental plates causes high volcanic and seismic activity, and the country has nearly 130 active volcanoes.

In late 2018, an eruption in the strait between Java and Sumatra islands caused an underwater landslide and tsunami that killed more than 400 people.