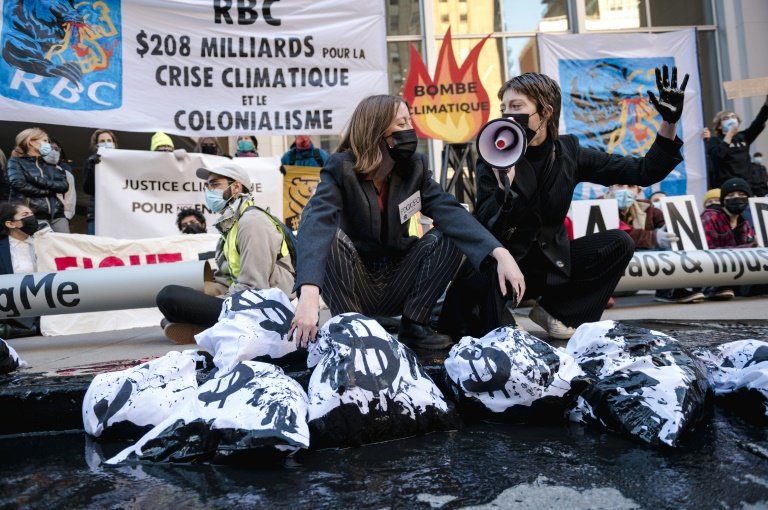 People dip fake money bags into poured paint and spread it as though it were oil in a protest against the Royal Bank of Canada’s investment in pipelines in Montreal, Canada on October 29, 2021 / © AFP

Canada has failed in its efforts to cut greenhouse gas emissions linked to global warning, the environment commissioner said Thursday, ranking it as the "worst performer" among Group of Seven industrialized nations.

A series of reports by independent parliamentary watchdog Jerry DeMarco looked at decades of government climate action that yielded an increase of more than 20 percent in emissions since 1990.

Canada "has become the worst performer of all G7 nations since the landmark Paris Agreement on climate change was adopted in 2015," DeMarco, whose title is environment commissioner, told a news conference.

"We can't continue to go from failure to failure; we need action and results, not just more targets and plans," he said.

DeMarco pointed to, for example, a government fund to help Canada's oil and gas sector slash their CO2 emissions. Some 40 funded projects allowed companies to increase their production and related emissions.

He also said reporting by a dozen government departments on sustainable development was poor. "They did not report results for almost half their actions," he said.

While Canada represents about 1.6 percent of global CO2 emissions, it is among the top 10 largest emitters globally and one of the highest emitters per capita.

The nation is also the world's fourth largest producer and exporter of oil. And Canada's energy regulator projects that, while domestic consumption declines, its fossil fuel production will grow because of exports.

Those include proposed green home retrofits, putting a cap on oil and gas emissions, and ramping up electric vehicle sales.

Guilbeault also pointed to a carbon tax that is set to rise to Can$170 per tonne by 2030.

DeMarco in fact did consider government pledges made this year, but noted that Ottawa has yet to issue an updated climate plan. Also, the most recent emissions data available is for 2019.

The commissioner concluded that a concerted government effort on a grab bag of actions, including the targeting of high-emission industries, is needed to get Canada back on track to meeting its new goal of cutting emissions 40 to 45 percent below 2005 levels by 2030.