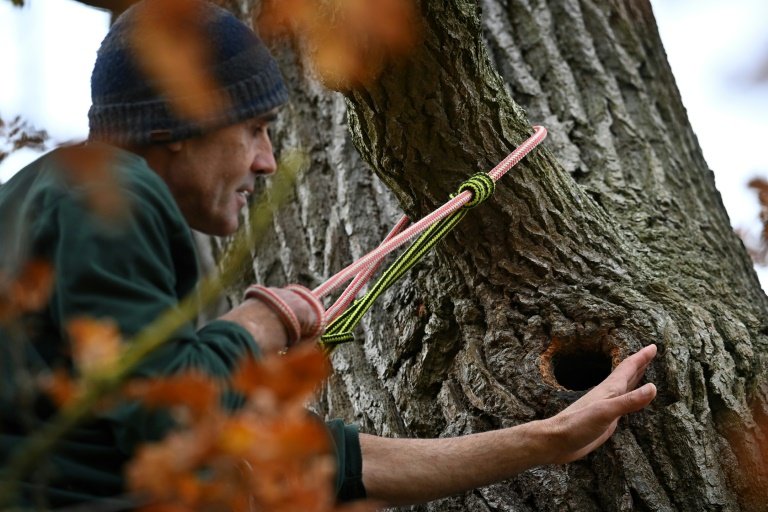 Conservationist Filipe Salbany, 55, has made a rare wild bee finding in woodlands on Blenheim Estate in central south England / © AFP

Hanging halfway up an ancient oak tree, peering into a small, dark hole in its enormous trunk abuzz with bees, Filipe Salbany can barely contain himself.

"Amazing -- the queen's laying!" the 55-year-old shouts down, as he dangles around 15 metres (just under 50 feet) above the grounds of Blenheim Estate, secured by ropes and a harness.

"This is a real classroom. This is fantastic. Unbelievable!"

The South African conservationist has spent much of the last 18 months scouring for hives in the ancient woodlands of the estate, near Oxford, in south central England.

His unbridled enthusiasm stems from his belief that these are no ordinary bees.

He has identified them as a rare ecotype -- a distinct form of a species, occupying a particular habitat -- with a suspected centuries-old lineage in the self-contained corner of the Oxfordshire countryside.

DNA tests are now under way to confirm the finding, but the potential discovery of wild descendents of so-called native bees has Blenheim and beyond buzzing with excitement.

It was thought such populations had largely disappeared due to disease, pesticides and competition with foreign imports. 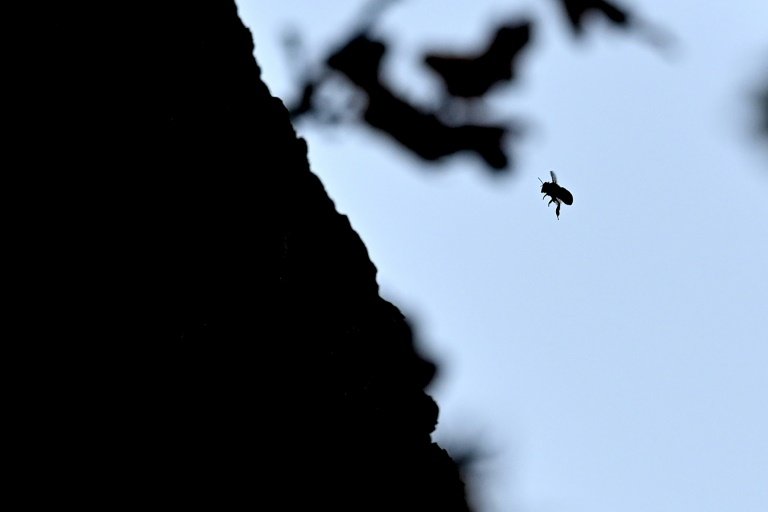 "If we can do this in more ancient woodland, different countries, if we can find local subspecies of bees... we can learn so much more about the environment and improve agricultural systems," he told AFP from his tree perch.

"Whether it's Romania, Bulgaria, France, we need to look at the species that are surviving and understand the factors that are affecting the bees, whether it's chemicals, pesticides, human intervention.

"We can stop mixing all the different lineages of bees and get fewer die-offs and once you start getting fewer die-offs, we can keep popular pollination at good levels."

Bees are an indispensable part of the natural environment, pollinating the majority of the food we eat.

But Salbany argues that managed honeybee populations have been overly colonised to serve human consumption needs.

This has had negative environmental impacts, he says, from stressing out the bees, to outcompeting other insects. 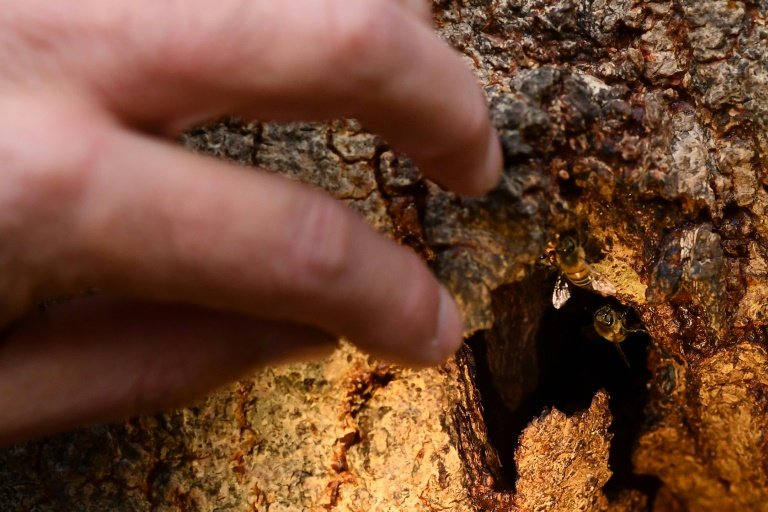 Salbany has identified the bees as a rare ecotype -- a distinct form of a species, occupying a particular habitat -- with a suspected centuries-old lineage / © AFP

Meanwhile, indigenous bee populations are under threat around the world.

In Britain, where most bees are imports found in managed hives, it is estimated that one-third of the wild population has disappeared over recent decades, decimated in particular by the varroa mite.

The Blenheim bees appear unaffected by this, leading Salbany to suspect they have evolved to live with the parasite, among other adaptations.

Blenheim, home to a World Heritage Site palace and centuries of heritage, boasts the biggest collection of ancient oak trees in Europe in its thousands of acres (hectares) of largely untouched woodlands.

With large tracts off-limits to the public, and no managed hives or agricultural production using pesticides on-site, it has provided the perfect environment for the ecotype. 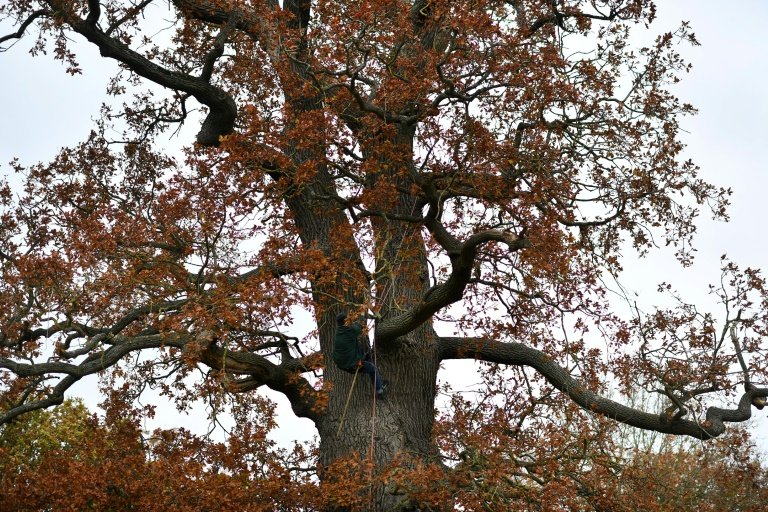 Blenheim, home to a World Heritage Site palace, boasts the biggest collection of ancient oak trees in Europe in its thousands of acres (hectares) of largely untouched woodlands / © AFP

Salbany, a physiologist and former international cyclist who also coaches elite athletes when not hunting for bees, began researching there with minimal expectations.

To his surprise, he has now counted nearly 50 hives in trees and estimates as many as 500 could exist across Blenheim's woodlands, remarkably surviving during winter.

"It's hugely exceeded my expectations," he said during a recent tour of the woods, which includes oaks up to 600 years old and bee nests that may date back two centuries.

"Sadly, there aren't a lot of other places like this."

The Blenheim bees are smaller, furrier and darker than those typically found in managed UK hives, and living their best untouched lives, according to Salbany.

"It's a bee without the stresses of pesticides, chemicals, surviving," he explained. 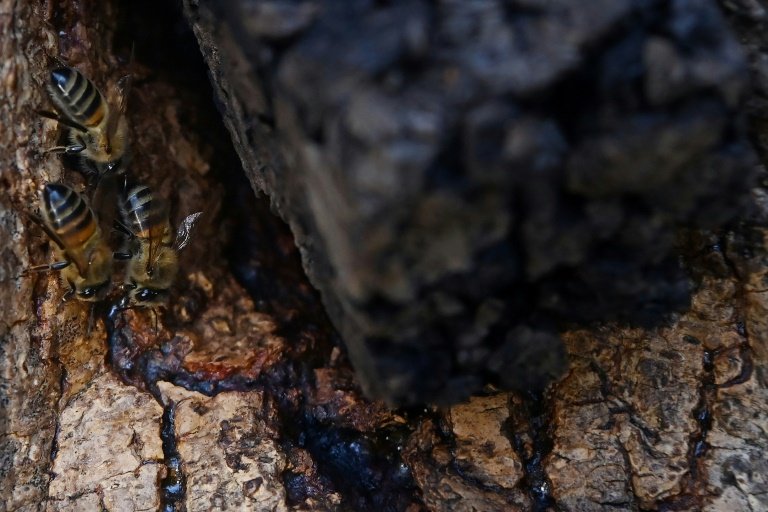 The wild bee find is surprising because it was thought such populations had largely disappeared due to disease, pesticides and competition with foreign imports / © AFP

"It's survived over a long period of time in its native environment -- that's what's critical."

Nick Baimbridge, head of Blenheim's forestry department, said discovering that the bees he had barely noticed during his three decades working there were special was a big surprise.

"We'd never paid that much attention until Filipe's come along and highlighted the fact that this is very unique," he added.

Baimbridge noted his team would continue to let the ecosystem thrive on its own.

"They've obviously been here for decades so we might as well carry on with what we've been doing." 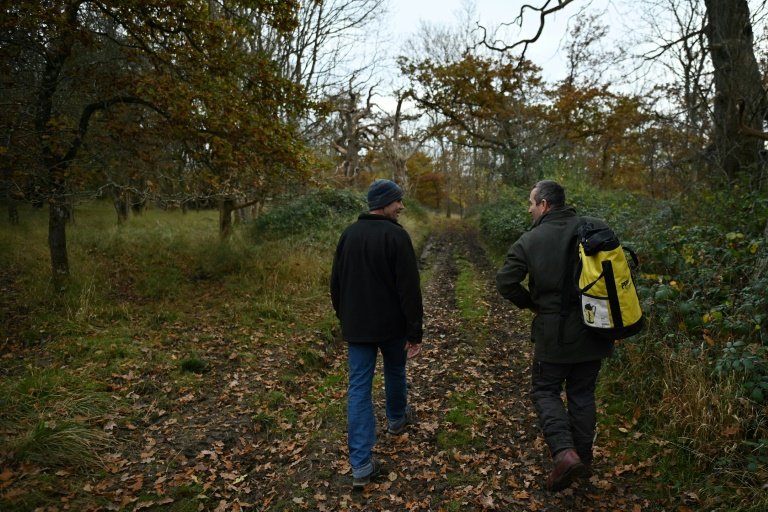 The Blenheim bees are smaller, furrier and darker than those typically found in managed UK hives, says Salbany (L) / © AFP

Salbany is awaiting the DNA sample results to confirm the precise lineage of the Blenheim bees, but reports about his findings have already stirred interest.

"It shows the value and complexity of our ancient woodlands and the need to protect these unique habitats in perpetuity," he told AFP.

Stoneman said it reinforced the importance of creating more wild places, citing the Trust's campaign to protect and connect at least 30 percent of Britain's land and sea for nature by 2030.

"If we can do that, discoveries like this could become commonplace -- our gift to future generations."