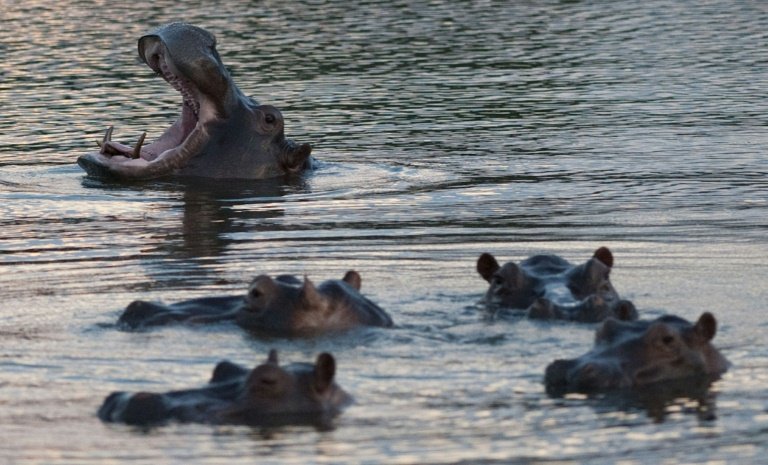 The hippopotamuses were left to roam Pablo Escobar's estate and continued breeding, to the point they are now believed to be the largest "bloat" outside Africa / © AFP/File

In a first, a US court has recognized animals as legal persons -- specifically, the descendants of Pablo Escobar's hippopotamuses who have thrived in Colombia since the notorious drug lord was killed almost 30 years ago.

The ruling came after the nonprofit Animal Legal Defense Fund (ALDF) filed an application seeking to allow two experts in nonsurgical sterilization of wildlife to provide testimony supporting a Colombian lawsuit to stop a cull.

At a federal court in Ohio, magistrate Judge Karen Litkovitz last week granted the request of the plaintiffs, the "Community of Hippopotamuses Living in the Magdalena River."

The ruling was based on a US law that allows an "interested person" in foreign litigation to request US depositions to help their case.

"In granting the application...the court recognized the hippos as legal persons with respect to that statute," ALDF said in a statement.

Christopher Berry, ALDF's managing attorney, told AFP on Thursday the district court order "will help the hippos in their lawsuit not to die -- that's the immediate impact of it.

"More broadly speaking, it's the first concrete example of a US court authorizing animals to exercise a legal right in the animal's own name," he added.

The lawsuit was filed last July on behalf of the hippos by attorney Luis Domingo Gomez Maldonado in Colombia, which already recognizes legal personhood for animals.

Its aim is to stop the government from euthanizing the animals, who now number around 100, up significantly from the single male and three females Escobar initially acquired.

Before he was shot dead by police in 1993, the cocaine baron purchased exotic animals to live on his ranch, including flamingos, giraffes, zebras and kangaroos.

After his death, all but the hippopotamuses were sold to zoos.

The semiaquatic ungulates were left to roam Escobar's Hacienda Napoles estate and continued breeding. They are now believed to be the largest so-called "bloat" of hippopotamuses outside of Africa.

This has had detrimental consequences for the local ecology, as well as reported attacks on local fishermen.

While the litigation is ongoing, authorities announced October 15 they had begun sterilizing the pod using the contraceptive drug GonaCon administered by dart guns, and through surgical sterilization.

The lawsuit contends it is unknown if the Colombian government will use the drug safely and whether it still intends to kill some of the animals.

It is seeking to provide the hippos with another contraceptive, called PZP (porcine zona pellucida), which has successfully been used in zoos and is recommended by Animal Balance, an international organization that focuses on sterilization of animals.

Thanks to the US court order, the testimony of Animal Balance's wildlife experts, Elizabeth Berkeley and Richard Berlinski can be used to bolster Maldonado's case.

Berry said the latest legal decision comes as other cases seeking personhood for animals make their way through US courts.

It remains to be seen how other courts will factor in the hippo decision, "but it certainly is relevant and important to the broader discussion of animal personhood and animal rights," said Berry.

The movement to grant animals legal personhood has also been gaining momentum globally.

In 2014, an Argentine court ruled Sandra the orangutan had been subject to unjust confinement at Buenos Aires Zoo. She is now settled in an ape sanctuary in Florida.