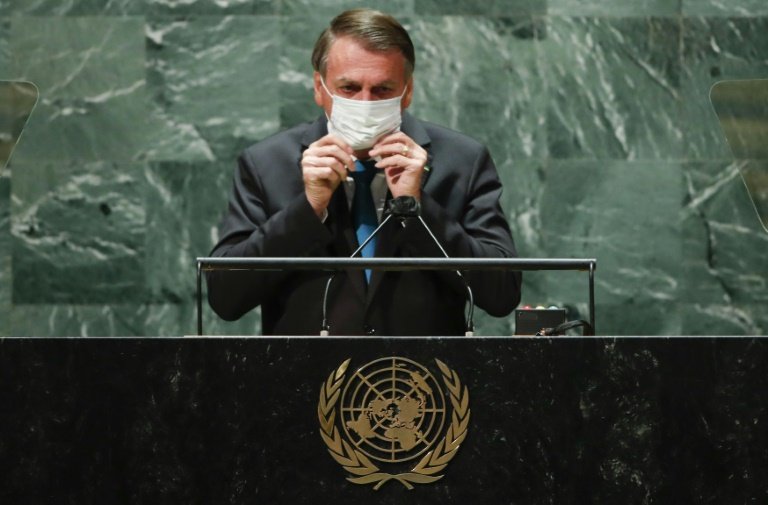 Brazilian President Jair Bolsonaro told the United Nations General Assembly on Tuesday that his government was against health passports but backed drives to vaccinate against Covid-19.

"We support the vaccination efforts," said Bolsonaro, widely criticized for his handling of the pandemic in Brazil where the coronavirus has killed more than 590,000 people.

"However, my administration has not supported a vaccine or health passport or any other vaccine-related obligation," he said in New York.

Bolsonaro was the first world leader to speak at the high-level meet -- tradition dictates that Brazil goes first -- after UN Secretary General Antonio Guterres opened the debate with an address of his own.

Bolsonaro has said he would be the "last Brazilian" to get vaccinated but told delegates that Brazil's inoculation program was moving swiftly.

He reported that his government had distributed more than 260 million doses, with more than 140 million Brazilians -- almost 90 percent of the adult population -- having received at least a first dose.

"By November this year, all citizens who have chosen to be vaccinated in Brazil will be duly covered," he said.

The far-right leader has sparked controversy by advocating unproven treatments against Covid-19, which he contracted last year.

"Since the pandemic started we have supported doctor's professional autonomy in the quest for early treatment measures in line with recommendations issued by the Brazilian Federal Council of Medicine," he told delegates.

Bolsonaro defied guidance to only attend the assembly if vaccinated.

He does not meet New York's vaccine mandate for many indoor activities, including eating, and ate a slice of pizza outdoors for his dinner on Sunday.