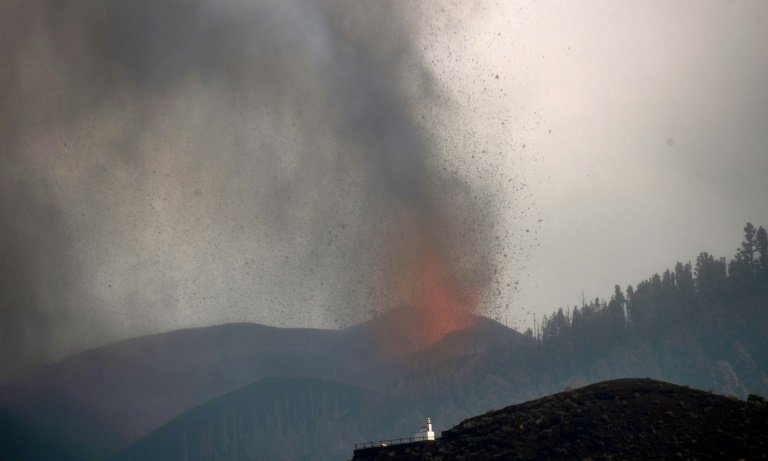 The Cumbre Vieja volcano has forced some 6,000 people from their homes, and destroyed 166 properties / © AFP

A vast river of molten lava from a Canary Islands volcano was edging towards the sea on Tuesday, destroying everything in its path and provoking fears it will generate clouds of toxic gases when it hits the water.

A new fissure emerged on the slopes of the Cumbre Vieja volcano overnight, belching out more lava and forcing hundreds more people to flee their homes.

"The lava flow is moving inexorably towards the sea and absolutely nothing can be done about it," said Angel Victor Torres, regional head of the Canary Islands.

"We are completely powerless in the face of this advancing lava flow which is moving at 200 metres (655 feet) per hour and has already swept away everything in its path... and will continue to do so on its way to the sea." 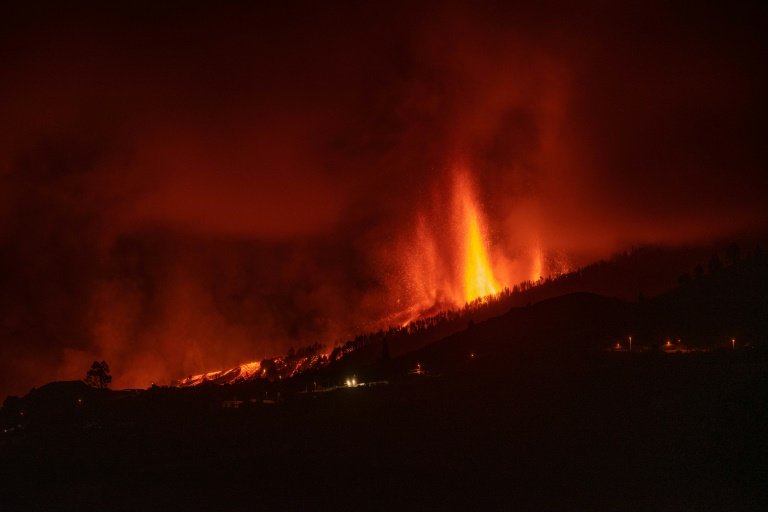 Located on La Palma island, the volcano has forced 6,100 people from their homes and destroyed a large number of properties and land spanning a huge area since it erupted on Sunday afternoon, say island officials.

So far, it had destroyed 185 buildings, of which 63 were homes, regional authorities added.

The volcano straddles a southern ridge in La Palma, one of seven islands that make up the Atlantic archipelago which lies off the coast of Morocco.

When the molten lava reaches the sea, experts warn it will send clouds of toxic gas into the air and will also affect the marine environment. The authorities have set up a no-go zone to head off curious onlookers. 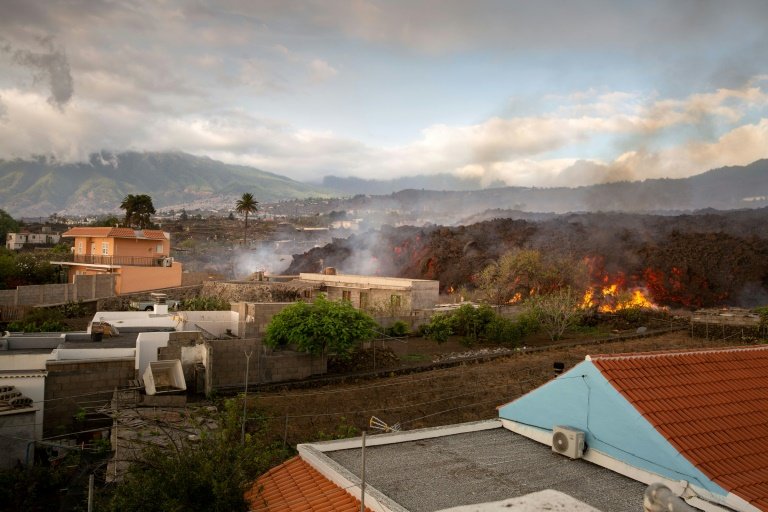 When the molten lava reaches the sea, experts warn it will send clouds of toxic gas into the air / © AFP

"The clouds created by the interaction of seawater and lava are acidic" and "can be dangerous if you are too close," volcanology expert Patrick Allard from the Paris Globe Institute of Physics told AFP.

By Tuesday afternoon, the lava had slowed to around 200 metres per hour although it was not clear exactly when the white-hot mass of molten rock, which has a temperature of nearly 1,000 degrees Celsius (1,830 degrees Fahrenheit), would reach the sea.

Although it is currently located about two kilometres (1.2 miles) from the shore, experts say its speed can be "very variable".

"It is very, very important not to forget that the emergency is ongoing, that the volcano is still active and we must avoid getting close to both the lava and the volcano itself," said Spanish Prime Minister Pedro Sanchez.

Overnight, long lines of cars could be seen waiting to leave the area as police sirens wailed, the fiery glow of the erupting volcano lighting up the dark skies.

"You have practically your whole life there... then one day the volcano decides to erupt and puts an end to it all," evacuee Israel Castro Hernandez told AFPTV late Monday after his home was destroyed by the wall of lava. 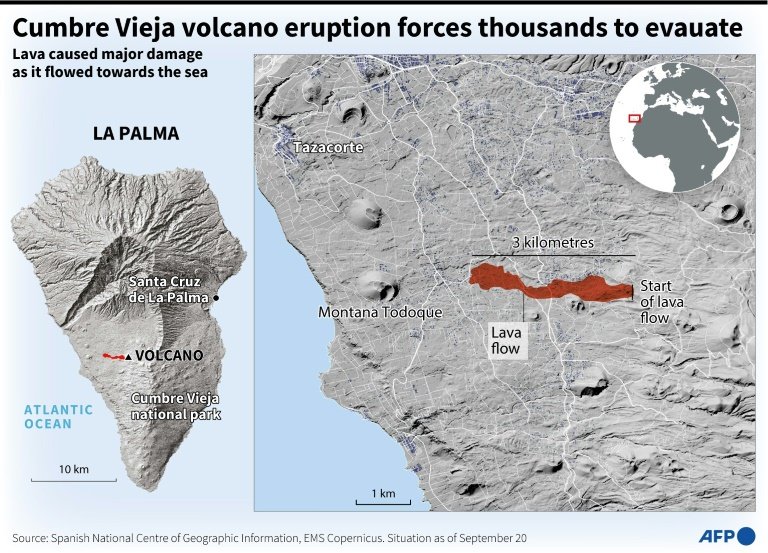 "We keep looking over there and we just can't believe it: we keep thinking that our house is underneath that volcano," said his wife, Yurena Torres Abreu.

The pair were among 500 people evacuated overnight after the new fissure emerged following an earthquake with a magnitude of 4.1 at 9:32 pm (2032 GMT), the Involcan volcanology institute said.

"So many friends have lost everything," said Yurena's sister, Elizabeth Torres Abreu, who also lost her house.

"They left their homes as we did with just the clothes on their back and little else. They've left their entire life there."

Although the eruption has not caused any casualties, the damage to land and property has been enormous, with Torres estimating the figures to be well over 400 million euros ($470 million).

Volcanologist Stavros Meletlidis from Spain's National Geographic Institute told Spain's RNE radio it was not clear when the lava would reach the sea.

"It can accelerate very quickly, especially when the topography changes... or it can stop on a plain for several hours," he said.

Although the Cumbre Vieja is shooting up vast plumes of thick black smoke several hundred metres into the sky and between 8,000 and 10,500 tonnes of sulphur dioxide per day, the airspace over La Palma has remained open.