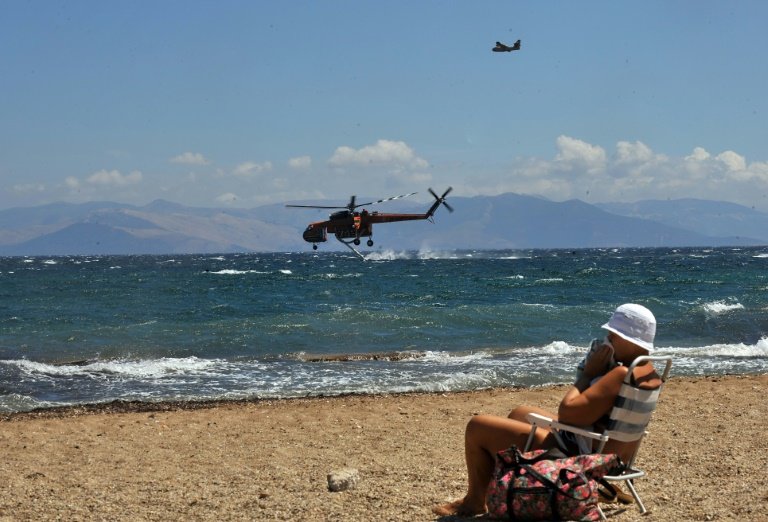 A woman sits on the beach while firefighting planes fill up with water in a resort of Nea Makri in eastern Athens on August 24, 2009: the town was evacuated again after wildfires broke out / © AFP

A wildfire broke out in a Greek seaside town northeast of Athens on Monday, burning through brush and pine trees and causing precautionary evacuations, firefighters said.

The latest fire comes after Greece was shaken by deadly blazes last month fanned by a heatwave that officials blamed on global warming.

Around 70 firefighters and 20 vehicles were battling flames on Monday night in the town of Nea Makri, 38 kilometres (24 miles) northeast of the capital, an official for the firefighters' press service said.

"The fire broke out at 10.35 pm local time (1935 GMT) near homes in Nea Makri, and evacuations have been recommended as a precaution," the official told AFP.

A series of devastating forest fires claimed three lives and ravaged more than 100,000 hectares (250,000 acres) across Greece in early August, mainly northwest of the capital, on the island of Evia and in the southern Peloponnese.

It was also a brutal summer fire season for a swathe of southern European countries, including Spain, Italy, Croatia, France and Cyprus, while blazes also claimed lives in Turkey and Algeria.

Scientists have warned that extreme weather and fierce fires will become increasingly common due to man-made global warming, and Greece's prime minister has linked the blazes to climate change.

At a summit in Athens on Friday, nine southern European Union members pledged their "firm commitment" to implementing the Paris 2015 agreement, which aims to limit the global temperature increase to 1.5 Celsius (34.7 Fahrenheit) above pre-industrial levels.

Also on Friday, the United Nations warned that the world is on the "catastrophic" path to 2.7 degrees Celsius heating because it is failing to slash global emissions.

Over the weekend the temperature rose above 35C in parts of Greece before dropping to 32C on Monday. It is forecasted to fall further this week.