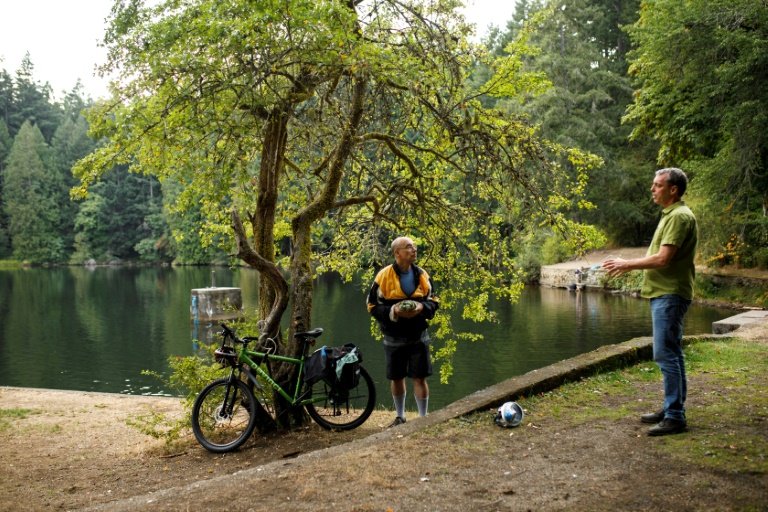 Concerns over climate change that gave rise to the Green Party are top of mind for Canadians preparing to vote in elections Monday, yet the party itself is fighting for survival.

Beset by internal feuding and other challenges, the Green Party has lost momentum and is struggling to hold on to its two seats in the 338-member parliament in the upcoming vote.

Ten years after the Greens won their first seat in the national legislature, the party is polling at just two to three percent. Liberals and Conservatives, meanwhile, are neck and neck, each with about 32 percent of voting intentions.

The stakes for the Greens are "to show that the party is still alive and kicking, that it is an option for those who believe in the fight against climate change," said Daniel Beland, a politics professor at McGill University in Montreal.

Its survival hinges on at least holding onto its two seats on Vancouver Island in westernmost British Columbia province, which was hit hard by wildfires and an unprecedented heat wave that left hundreds dead over the summer. 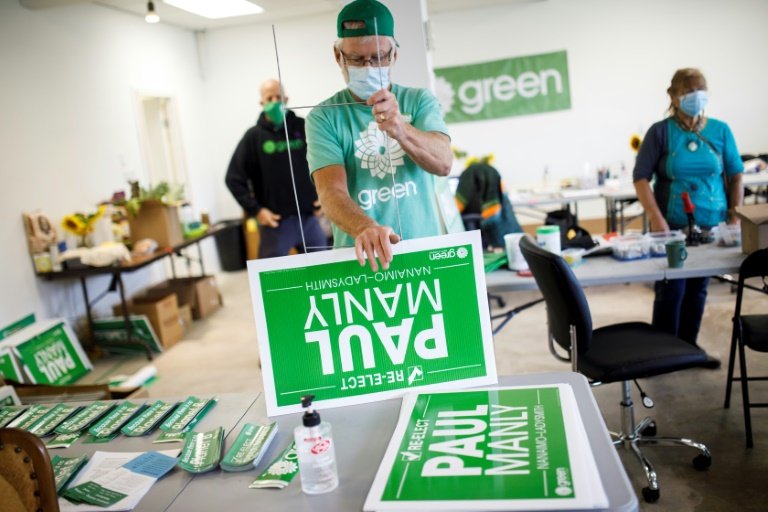 Elizabeth May, the first Green elected to Canada's parliament in 2011 and the party's former leader, is likely to retain her seat in the Saanich–Gulf Islands. But fellow Green Paul Manly, seeking re-election in the nearby district of Nanaimo-Ladysmith on the picturesque Pacific isle, is facing tough competition.

"I think climate change is one of the top issues for sure in this election," Manly told AFP.

"We need really bold action on climate change and that means we need to end all subsidies for fossil fuels," he said. 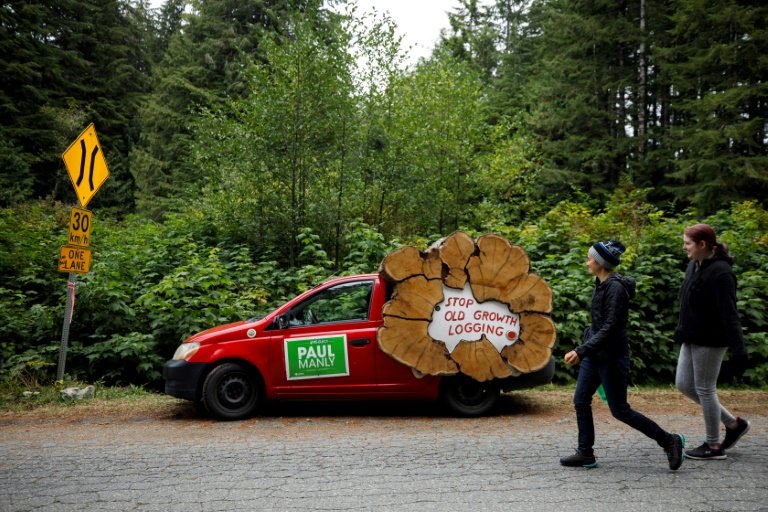 A car carries signs for Green Party candidate Paul Manly at the base of the anti-old growth logging protest of the Fairy Creek watershed in Port Renfrew, British Columbia in September 2021 / © AFP

The Greens also want to cut greenhouse gas emissions 60 percent from 2005 levels by 2030, a more ambitious target than what's on offer from other parties.

But their message has been drowned out in part because the main political parties have stepped up with their own relatively strong climate plans. And the Tories have been busy fighting a Liberal carbon tax that could curtail oil production in their base of Alberta.

The Greens "have lost their monopoly on the environment. It has become a popular cause for all parties in Canada," Beland explained.

Nancy Powell, 59, from Vancouver Island, said she once supported the Green Party, but now believes that their focus on the environment is too narrow.

"I'd really like to see them break out of that and expand their expertise in different areas," Powell told AFP, adding that helping small business is an important for her.

Just two years ago, the Greens won 6.5 percent of the popular vote in the last ballot.

In the lead-up to this snap election call in early August, the Greens were busy arguing among themselves over the loss of an MP to the Liberals, party finances, and its leadership.

Paul, the first black and Jewish woman to lead a federal political party in Canada, has lamented having had little time to put together a team. As a result, the party is running only 252 candidates in this election.

She is now facing a tough fight to win a seat herself; this is her third attempt to break through in the Toronto-Centre district held by powerful Liberal cabinet ministers since 1993.