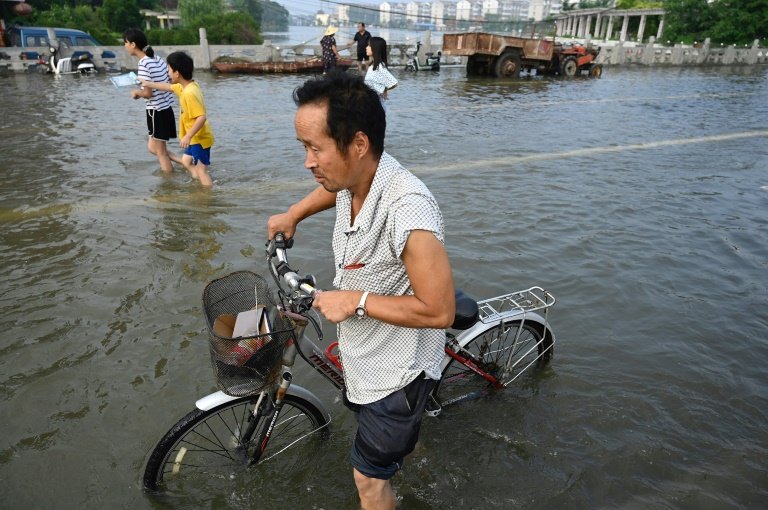 Villagers were evacuated over makeshift bridges Friday as floods submerged swathes of central China following a historic deluge that claimed at least 56 lives -- while an approaching typhoon threatened to dump more rain on the stricken area.

Millions have been affected by the floods in Henan province, which have trapped people for days without fresh food or water and blocked roads as they breached embankments, caking large areas in thick ankle-deep mud. 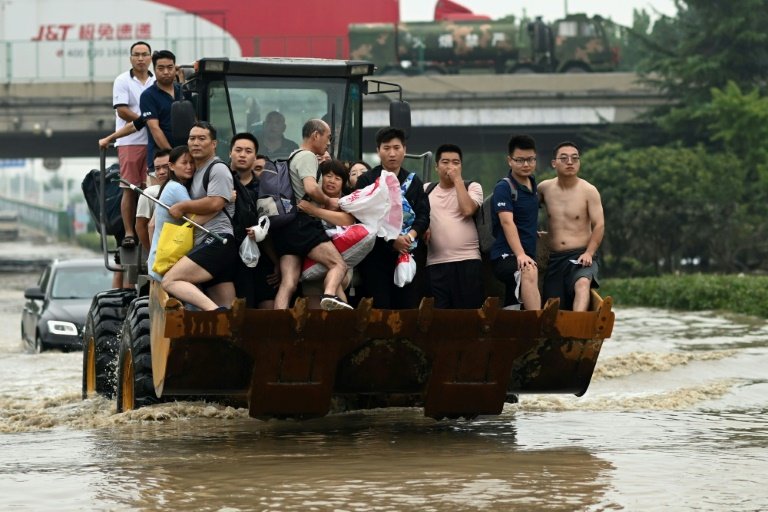 People are carried across a flooded street in the worst-hit city of Zhengzhou, which received a year's worth of rain in just three days / © AFP

The death toll is expected to rise, with provincial officials telling reporters Friday that casualties were still being counted.

Adding to the misery, Typhoon In-Fa is forecast to bring further torrential downpours to parts of Henan in the coming days, state media said.

In the worst-hit city of Zhengzhou, firefighters Friday continued to pump muddy water from tunnels, including from a subway where at least a dozen people drowned inside a train earlier in the week as a year's worth of rainfall fell in just three days. 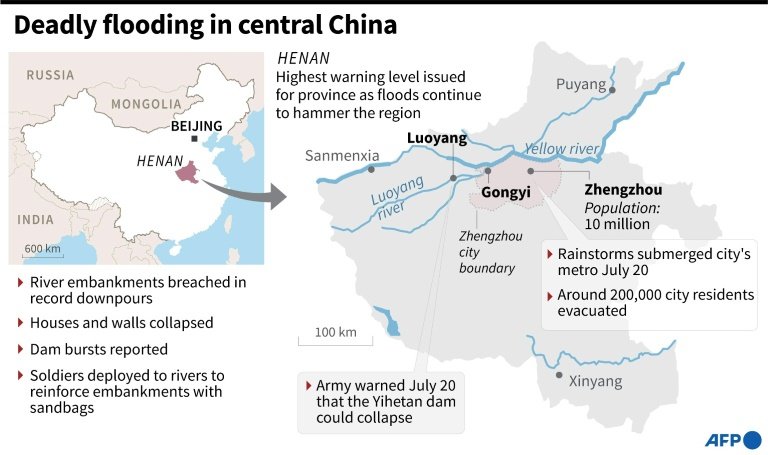 Overnight, heavy rain saw floods surge northwards to the city of Xinxiang and surrounding areas, where vast tracts of farmland were inundated and the town cut off as the Wei River burst its banks.

"We were at my grandmother's and then the water suddenly rose... the building was surrounded by water," said Sun Haocun in the town of Weihui, who was rescued in a dinghy by a team of volunteers. 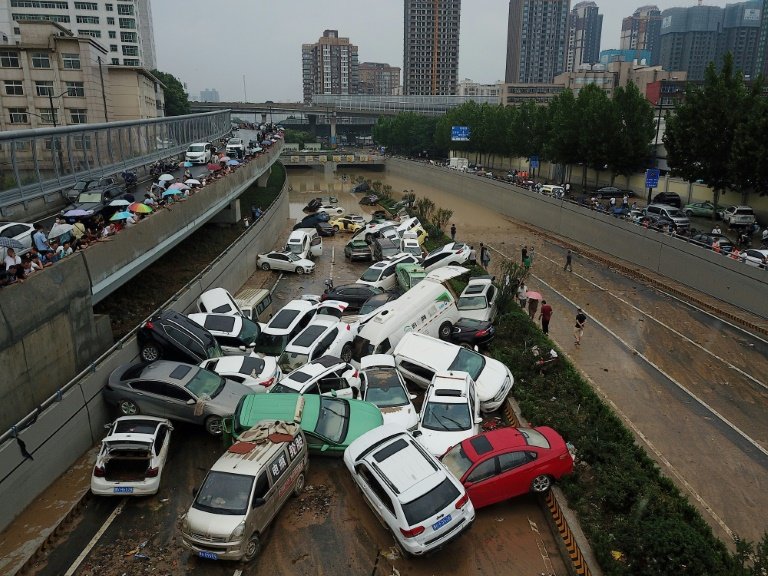 Teams of rescuers in life jackets helped residents to safety, with several elderly people in wheelchairs lifted above the surging water through streets of shuttered shops.

"The resistance of the water is strong, especially when the water level is high and reaches up to the neck," said one exhausted volunteer Wang Kai, pushing an inflatable canoe.

Aerial footage showed rescuers using temporary bridges to move hundreds of residents to safety, with tree tops poking above the water the only sign of land for miles.

More than 495,000 people have been evacuated, said the Henan government, with the flooding causing billions of dollars in losses.

Liang Long, an employee at a hotel in a city neighbouring Xinxiang, told AFP hundreds had arrived seeking refuge since Thursday afternoon and through the night.

"Their villages have been flattened with nothing left," he said. 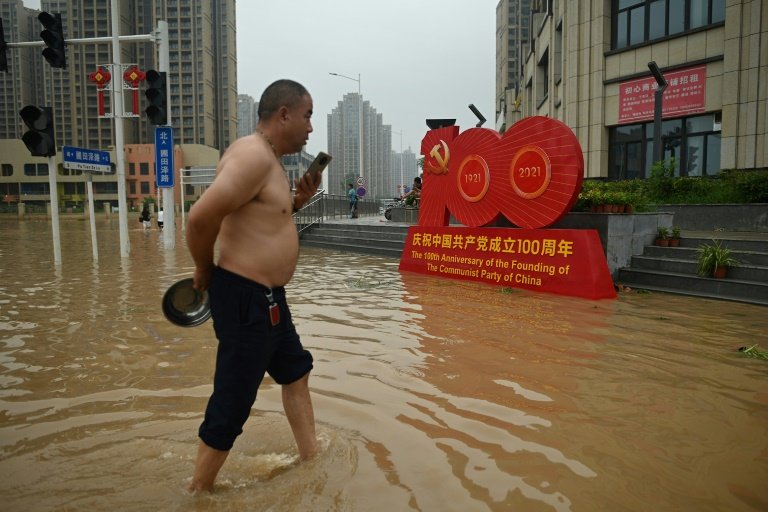 A man wades through a flooded street in Zhengzhou / © AFP

The hotel, about 20 kilometres (12 miles) from the worst-hit areas, was still receiving "continuous" calls for help, Liang added.

"There are many people and our hotel's food is running low," he said.

Videos shared on social media have provided a window into the destructive power of the floods, which tossed cars into piles and sucked pedestrians towards storm drains.

Harrowing footage from rush-hour passengers trapped inside the subway, where waters rose from ankle to neck height, pinballed across China's Twitter-like Weibo as people questioned why the underground network had been allowed to operate during an unprecedented storm. 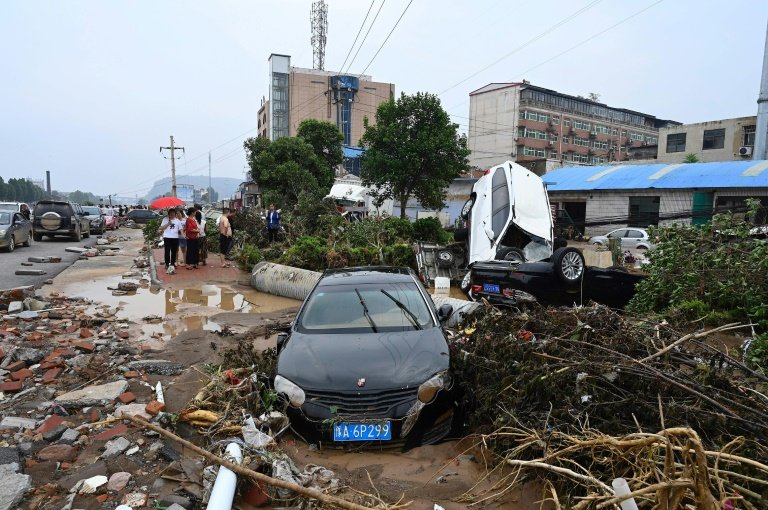 The floods have left a trail of destruction / © AFP

Meteorologists are now anxiously watching the progress of Typhoon In-Fa, which has already dumped heavy rainfall on Taiwan and the east coast of China and is expected to make landfall from Sunday in an area home to tens of millions of people.

During high tides "coastal areas should guard against the combined impact of wind, rain and tides," it added, warning the public to prepare for a major weather event.

Questions have been asked about how China's bulging cities could be better prepared for freak weather events, which experts say are happening with increased frequency and intensity due to climate change.

Henan province is criss-crossed by rivers, dams and reservoirs, many constructed decades ago to manage the flow of floodwater and irrigate the agricultural region.

State media has rebuffed suggestions that dams played a part in subverting the normal flow of water.

Stories of remarkable survival and tragedy have emerged as floods retreat from southern parts of Henan, with a baby dug out from a collapsed house while her mother died in the debris.