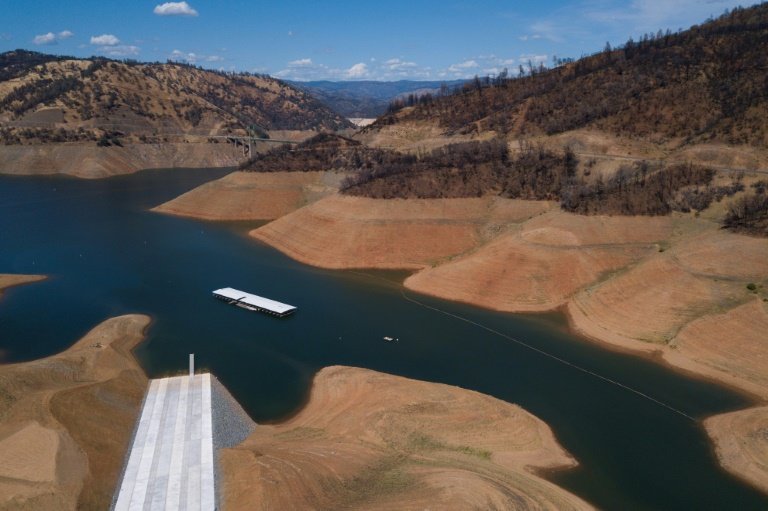 Water levels in the Lake Oroville reservoir, the second largest in California, are already far lower than in past years -- a worrying sign of extreme drought / © AFP

Summer has not even begun and Lake Oroville, the second-largest reservoir in California that provides drinking water to more than 25 million people, is at less than half of its average capacity at this time of year.

It is a worrying indication of the worsening drought conditions in the northern part of the Golden State.

"When we go into a year like this with the reservoir low and with really dry conditions throughout the state, that is concerning," John Yarbrough, the assistant deputy director of the California Department of Water Resources, told AFP.

"The reservoir is much lower than we would like to see it, much lower than typical at this time of year. It's about 47 percent of average," he said, pointing to the cracked earth forming the lake wall.

Since May 10, California Governor Gavin Newsom has declared a state of emergency linked to drought in more than 40 counties. Conditions in Butte County, where Lake Oroville is located, are already seen as "extreme," the highest level.

And the situation -- exacerbated by the effects of climate change across the western United States -- is not expected to improve before the rains return in five or six months.

Yarbrough said that in 2019, which he called a "good year," the water level reached the trees on the edge of the dam -- meaning it was about 50 meters (165 feet) higher than usual.

Residents of the area told AFP they had never seen dry conditions like this before.

Many of them recalled how in 2017, they had to evacuate because torrential rains had prompted authorities to fear that the dam would break under the pressure. Not even five years later, the situation has shifted dramatically. 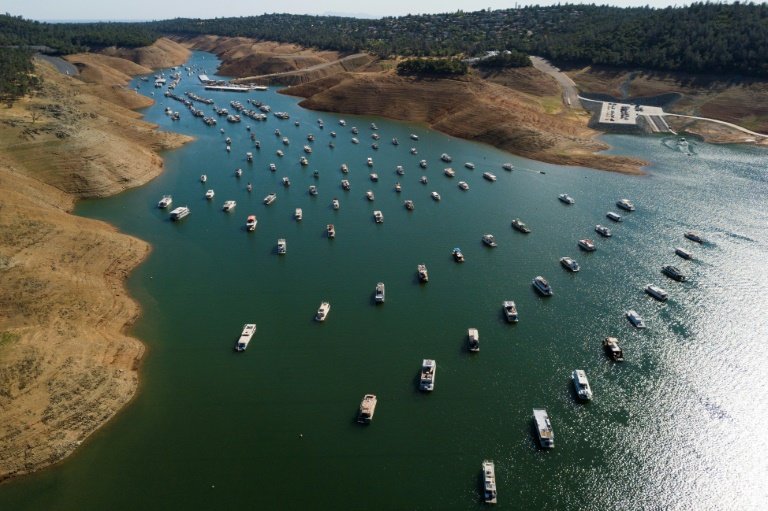 Lake Oroville, built in the 1960s at the confluence of three rivers, is the key component of California's State Water Project, a massive network of reservoirs, aqueducts and pipelines bringing water from the northern part of the state to the south, which has a higher population and a far drier climate.

"This lake right here provides drinking water for 27 million Californians," Yarbrough said, adding that it also irrigates "up to 750,000 acres" (303,000 hectares) of farmland.

On average, Northern California gets two-thirds of the state's total precipitation, but this year has been particularly bad.

On April 1, which traditionally marks the end of snowfall in the state, snow reserves in the Sierra Nevada mountains -- source for about a third of the water used in California -- stood at only about 60 percent of the average.

The waters contained by Oroville Dam, the tallest in the United States at 770 feet (235 meters), will not dry up that quickly, but at the end of the so-called dry season the lake is expected to be at its lowest level recorded since September 1977. 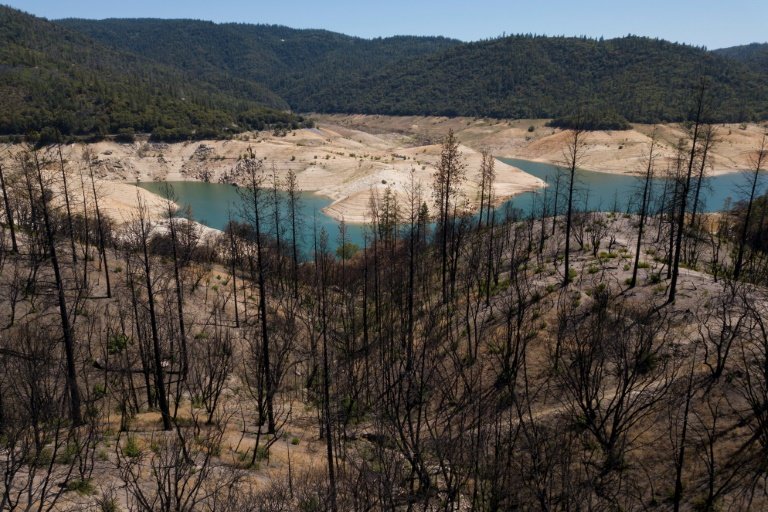 After two years with very little precipitation, and with no assurances that upcoming seasons will be any better, water restrictions are the next step.

The California Department of Water Resources, which runs the State Water Project, has warned that it risks being unable to provide more than five percent of requested supplies this year.

The owners of dozens of boats moored on Lake Oroville were forced this week to put the vessels in dry dock, or risk seeing them run aground and be damaged.

Another serious consequence of the drought: the increased risk of wildfires, which is particularly worrying for authorities in a region that has been repeatedly devastated in recent years by massive forest blazes.

The charred trees that dot the landscape around Lake Oroville are a stark reminder: Last year, more than 6,500 square miles (17,000 square kilometers) went up in flames in California alone, and 33 people were killed, including 15 at Berry Creek, not far from Oroville.

This year, fires have already consumed five times more vegetation than at the same point in time in 2020.

"I think we're in a long-term trend of drought conditions. And it's been going on for about six years," said Butte County fire chief John Messina.

"We've had a few wet years in between those years, but overall, we're much drier than what we're used to," he said.

"It doesn't take a rocket scientist to understand if you don't have precipitation, your fuels don't stay moist -- and the drier the fuels are, the more potential there is to have a catastrophic wildfire, or at least an extremely busy summer in California."