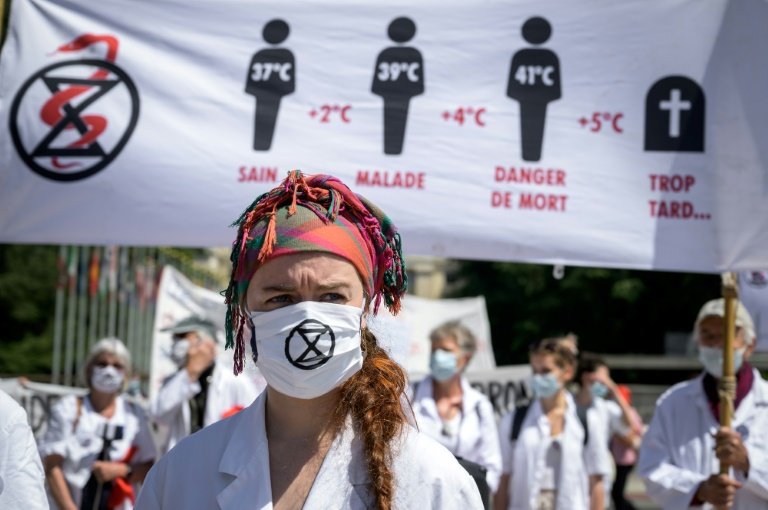 Hundreds of health workers marched to the World Health Organization on Saturday demanding that authorities in all countries recognise and act to counter the health risks of climate change.

Around two hundred people wearing white medical coats and facemasks marched or were pushed in wheelchairs two kilometres (1.2 miles) through Geneva's international district to the WHO headquarters.

Some carried giant banners urging action, including a towering thermometer showing the red temperature scale rising towards a burning planet.

Once at the WHO building, representatives of the Doctors for Extinction Rebellion (Doctors4XR) climate activist network handed over a petition to WHO chief Tedros Adhanom Ghebreyesus.

Signed by more than 1,100 health professionals from around the world, the text slammed the "inertia, inaction and the abyssal distance between speeches and actions".

It demanded that health authorities in every country, who are currently taking part virtually in the main annual meeting of WHO member states, "publicly state that climate change is putting people at risk of death, and act now to preserve life."

"Year after year, declaration after declaration, multilateral institutions -- including WHO -- have warned us: climate change and the loss of biodiversity endanger human health worldwide," the petition said. 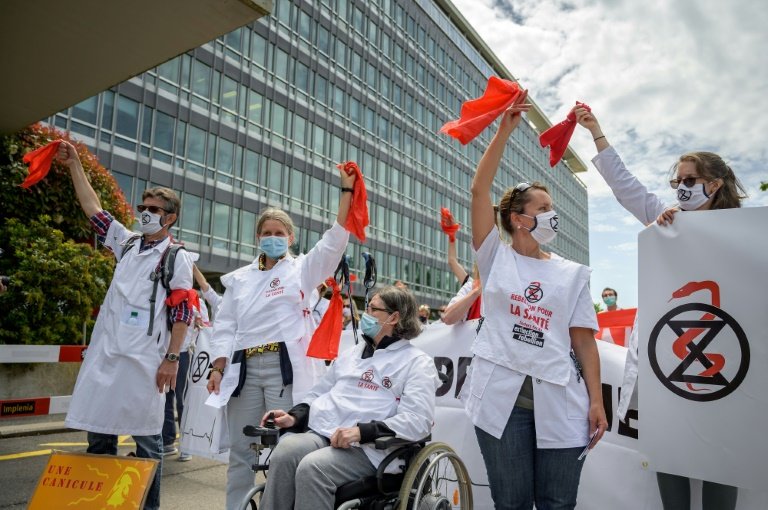 The petition slammed the "inertia, inaction and the abyssal distance between speeches and actions" / © AFP

Health workers worldwide are already "confronted every day with the consequences of environmental deterioration on our patients and communities," they said.

"The list of ailments they suffer from is getting longer every day.

"We are seeing more and more respiratory and cardiovascular diseases due to polluted air, loss of working days and deaths due to heat waves, over- and undernutrition due to lack of quality food, and diarrhoea and intoxications due to polluted drinking water.

- 'No vaccine for climate change' -

To make the point, the petition came in an envelope decorated with a drawing of a healthy human at 37 degrees Celsius (98.6 Fahrenheit), then "sick" if two degrees were added, in "mortal danger" at +4C and at +5C, "too late", followed by the words: "Same with the planet."

"Despite accumulating evidence, repeated warnings... despite more frequent and more serious natural disasters, including the Covid-19 pandemic," the petition said, "the concrete actions implemented by our governments are not nearly enough."

Tedros hailed the activists, vowing to read their letter to the member states.

"The COVID-19 pandemic has once again highlighted the intimate relationship between the health of people and planet," he said, stressing that it showed "what happens when we are under prepared and fail to cooperate with each other."

In that sense, "the risks posed by climate change could dwarf that of any single disease," he warned.

"The pandemic will end, but there is no vaccine for climate change."

Richard Horton, the chief editor of the Lancet medical journal and one of the signatories, agreed.

"The climate crisis is not merely a threat to health," he said by video link.

"It is a threat to life itself."